Can Teams Suppress Shots Without Possession?

Share All sharing options for: Can Teams Suppress Shots Without Possession?

Tyler Dellow recently wrote about some comments from Bruce Boudreau wherein the coach said that his teams fare poorly in possession metrics because they block a lot of shots and force opponents to miss a lot of shots. Dellow's conclusion was that this was unlikely -- and I agree -- but perhaps the idea merits a more careful investigation.

First, we have a quick linear regression to check for a relationship between Corsi For % and % of shot attempts against that are blocked and missed: 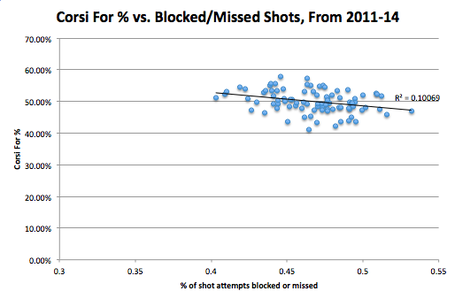 It's important to note here that I used 5v5, score close CF% from Extra Skater for this one, and that the data comes from the last three seasons.

So. The above graph shows us that yes, some teams with poorer overall possession numbers did, in fact, block a proportionally larger number of shots and/or see more of them go wide. It's a weak correlation, and not one I'd put a lot of faith in, but it at least opens the door to the idea that perhaps specific individuals have managed to suppress more on-goal shot attempts than others.

The next logical step is to check to see if any of the low-Corsi For % teams who also blocked a lot of shots did so with any consistency. It may also be interesting to track the coaches who may have changed teams to see if there was a similar suppression of on-goal shots, but I'm getting ahead of myself, here.

Here are the top 10 teams over the last 3 seasons with the biggest percentage of blocked and missed shots. Any patterns?

The main pattern that I notice is that 7 of the top 10 teams were from the lockout-shortened 2012-13 season, which suggests that this is a question of variance more than anything. After all, it seems that a smaller same size is the common link. Also, if any coach was particularly good at intentionally producing this result, you'd think the only team to do it twice in the top 10 would be someone other than the Islanders. Their most recent season finished 63rd in the group anyway, which also makes me think that it's not something particularly repeatable by a group of players.

For the sake of contrast, we can also have a quick look at how blocked and missed shots compare to shots against to see if there is some connection, there. 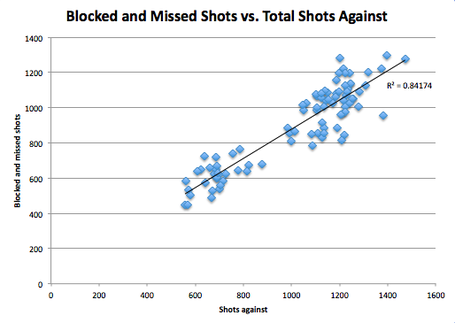 Again, this is 5v5 score close data from Extra Skater, also from 2011-14, even though I forgot to add that in the title.

I'd say that's a sliiiiightly stronger connection. Odds are, if your team is blocking more shots and having more shots miss your net, you're also allowing more shots on your actual goal. So far, this is the correlation you should be putting more faith in, folks. But let's entertain Boudreau's idea for a little longer. Maybe, just maybe, there are individual coaches (not just teams) who have been able to replicate success at blocking shots and forcing misses than other teams.

Hm, nope. The only year his team did well at this was in the shortened season. Also, Randy Carlyle coached 24 games with the Ducks in 2011-12.

Hey, how about our friend Randy Carlyle? He's big on this stuff, too.

Carlyle's teams are all in the top third of the three-year group (which doesn't exactly say much), though again, his highest percentage is in the lockout-shortened season. More importantly, Ron Wilson coached the bulk of the 2011-12 season, which further compromises these numbers. It is curious though, that every season Carlyle has in any way been a part of has seen 48-49% of shots blocked. Let's look at the total numbers instead of just the 5v5 so we can look at his entire career (Extra Skater only has the past 3 seasons).

OK, so here Carlyle appears to have much more variation in his numbers, though it's true that these are from all situations, and not just from 5v5 score close. Still, the higher percentage blocks/misses seem to have come in more recent years -- years when he's had a generally poorer team to coach. Heck, maybe the man has adapted his coaching style, but I'm not sure we could necessarily link that to these kinds of figures. In any event, his numbers, when looked at over the course of several seasons, have only crept into the 46-47% range in the last three (very abbreviated) seasons.

42 games split between the Ducks and Leafs, 48 games with the Leafs, and then finally one full season in the 46-47% range is not what I'd call a reliable sample size, but you also can't say Carlyle's recent teams haven't blocked shots. In short, yes, the Leafs have blocked more shots recently, but I'm not convinced this is something Carlyle capable of coaching players to do for another full season.

A couple other problems for this "good at blocking shots and forcing missed shots" theory: wouldn't Fenwick numbers differ more than they do from Corsi numbers if shot blocking was a big deal? In fact, Fenwick numbers even MORE closely mirror actual puck possession time. If Boudreau's (or Carlyle's) argument rests on the idea that missed shots mess with possession numbers a lot, I'm going to go out on a limb and say that he can't make other teams miss his goal with any reliable frequency.

So to wrap up, we found very little connection between poor teams and high percentage misses/blocks, teams generally struggle to repeat their performances, and while Randy Carlyle has seen some consistency of small sample sizes (the story of the Leafs' life), it seems far more likely that allowing more shots is the biggest driver of blocking more shots. For Bruce Boudreau's part in this, may be a good coach, but I'm not sure he always knows why.