When Alberta hockey fans are not wraslin' cattle, freezing in Arctic conditions or watching their teams lose hockey games, some fans are involved in hockey's growing Analytics movement. I was invited to attend and speak at the first ever Alberta Hockey Analytics Conference in Edmonton.

Share All sharing options for: The First Ever Alberta Hockey Analytics Conference

The Alberta Analytics Conference was organized by Rob Vollman. If you haven't heard his name before you've definitely seen his work on my site, or his site, or extraskater. Yes, Rob Vollman invented Player Usage Charts, among many other new stats such as passes, quality starts, and more. He's also published a book.

But enough about Rob, let's talk about me. When Rob emailed me to ask if I would like to attend an analytics community get together in Calgary or Edmonton, I said sure. When he asked if I'd like to present something, I was honored at first, and then worried because I'd have to think of something to present. He shot down my first suggestion: watching Gardening With Greg videos and sharing gardening tips and tricks.

First there were Introductory remarks and introductory introductions of the attendees by Rob Vollman.

Note: these recaps are going off memory so any errors in what transpired are due to my faulty recollections

I missed most of this presentation but Sean developed some models to determine how much "luck" is contributing to a player's points total. If the player has been really lucky, use them as trade-bait in a deal with a less knowledgeable owner. Likewise, if the player has been unlucky, buy low on them and reap the benefits later on. Consider Kessel's slow start or Mark Fraser's crazy high on-ice shooting percentage last year - it's probably not going to last long term so you could make moves to acquire or get rid of these players. (Nonis did trade Fraser for a bag of pucks, not bad right?) I would have liked to see more aboot how Sean calculated luck, as there are other sites that do this. (According to that site Leafs were the third luckiest team last year and Colorado was the most luckiest this year)

Another point Sean brought up was to include other stats like giveaways and hits and quality starts in pools. We didn't think much of using real-time stats in pools because they're basically worthless but we did like the idea of using more interesting and predictive stats for goalies like Quality Starts. (My tip for picking a goalie is pick a bad goalie on a good team like Fleury or Niemi (or Quick lol) and they'll get you wins but you won't have to use a high pick on 'em)

Justin spoke about how a player can know what their CORSI is but just knowing the number is not necessarily going to help them be a better player. So with an eye towards determining which plays result in which outcomes, Justin watched dozens of games, counting things like icings, snow angels, zone entries, etc. I would have liked to know what his results were for specific players but there were no cumulative stats presented - maybe there will be a Flames Nation post on this later.

One other interesting thing he spoke about was how a defenseman can get stuck on the ice because there isn't an opportunity to switch the player. This results in tired defense, more shots against, and more goals against. Instead, teams should use the roller hockey line change, summarized in this post.

Rob Kerr is a broadcaster with Sportsnet 960, and has worked at with all levels of hockey and forms of media. He is very interested by hockey analytics, and wanted to share his perspective on how new technology and ideas get adopted by hockey clubs. While living in Estevan, Saskatchewan, he was calling play by play for the Estevan Bruins of the Saskatchewan Junior Hockey League. He recounts how he wanted his family members to listen to his play by play online, and worked out a deal between the local internet company to get a local computer store to sponsor the broadcast. With this deal the Estevan Bruins were one of the first Junior Teams to have their games broadcast live online. 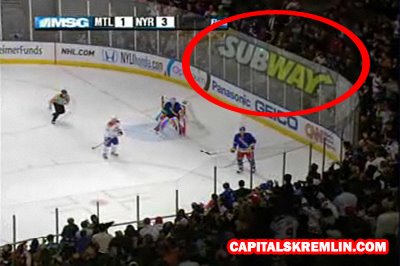 One of the points that Kerr stressed was that there is always a cost associated with new technology, and the usual way to recover that cost is through sponsorship. Those computer generated floating ads that appear on the glass in Sportsnet broadcast? They cost $250000 and Subway pays a lot to get their name there. If Sportsnet has that technology, then they at least have the technology to track zone time (just time how long the subway ad appears on each end of the ice) and could probably expand it to track players - but who will pay for that? Do you know any teams with a lot of money and an unused analytics budget?

I asked Kerr if he thought SportVU-style analysis would be coming to hockey. He agrees it will be, but is doubtful if it would be available to the average fan. Teams don't want to share their data with other teams, let alone the average joe hockey fan.

Kerr mentioned that the Flames use the PUCKS! system to break down game video into individual plays. If you wanted to say, watch Lundqvist's tendencies while stopping shots, you can query that and see a dozen videos of him facing similar shots. According to the PUCKS website 17 teams use their software. The Flames also have an analyst who uses his own proprietary formulas for proprietary reasons, but Kerr could not elaborate further because the Flames have become more tight-lipped about their analytics in recent years. Also depending on how much stock you put into Flames President of Hockey Operations Brian Burke's comments about hockey being an eyeball business, they may not even be using this analysis.

Kerr mentions that in the next couple years the format of the NHL's play by play report will be updated, to include things like offsides and icing information. This is because the teams themselves are parsing data out of this, and the data they get is only as accurate as what is on the sheet - and everyone and every team wants more and better data.

I also learned how the NHL tracks the shot and goal locations that Super Shot Search uses for data: 5 guys on laptops at pressbox level, at least in Calgary, work every game and diligently track every event. I would love to see how this data gets recorded live.

I will have a separate post on what I researched and presented. You'll never believe what I found out!

Sunil spoke about how to improve understanding and make progress in the field of hockey analytics by introducing it at the post-secondary level. It could make an ideal project for a Stats 101 course, to run linear regressions and find statistical significance in the data. I could also imagine some of the teachers at PPP teaching their students about Corsi or Fenwick.

The other thing Sunil stressed was that we need to have a sense of community and have open and shared data with everyone. He suggested that developers like me should open source our code and databases. There are at least two open source projects that can parse play by play and/or shot locations, and I'm pretty sure Tyler Dellow is using Muneeb Alam's open source code to do further analysis. I am hesitant to open source my code and data entirely though, for the following reasons:

On the other hand, if I were to share my database or code maybe other people could come up with new and improved versions of Super Shot Search, say, a Super Duper Shot Search (and at least this way the site might have a new feature more than once every 2 years).
So, hockey stats developers, what's your take on this?

Dan Haight - Adoption of Analytics (by the Edmonton Oilers)

Dan is analyst from Darkhorse Analytics who works for the Edmonto Oilers. He spoke about how to have successful adoption of analytics, you need several components on your analytics team:

(I think there was another component but I can't remember it) Dan mentions how a lot of management focuses only on the data butler or the automaton but not enough on the data explorer - you need to have the freedom to discover new things and take risks to create something of value.
One of the things Dan's group is working on is a model to predict who the Oilers should draft. His team worked through previous drafts and using his model showed that the Oilers should have drafted Logan Couture rather than Sam Gagner at 6th overall. His model would have picked better NHL players than the Oilers actually did - sadly I don't have his specific examples with me. His model is also completely proprietary, I wonder if it's better than "pick the player with the most points" model that Rhys J wrote about here? Another thing Dan mention was the vast majority of players drafted are very tall, however the average NHL player's height is only 6'1". In other words, height does not guarantee NHL success.
Dan spoke about some of the hits, misses, and failures his analytics team had this season.
It seemed like some of the Oilers fans in the audience were skeptical of Dan's claims - after all, they did pick up Gadzic on waivers.

Rob concluded the conference by asking us questions about how we'd like to proceed with these kinds of conferences. We decided:

This conference was a great way to meet people I had only spoken to online and build a sense of community. Why not come to the next conference in Alberta, or start your own?