It's Really Easy To Be A GM In Toronto

In Toronto, there's no consequence for spending a lot of money and getting no results. Just do a mediocre job in a shortened season, and you're set!

Share All sharing options for: It's Really Easy To Be A GM In Toronto 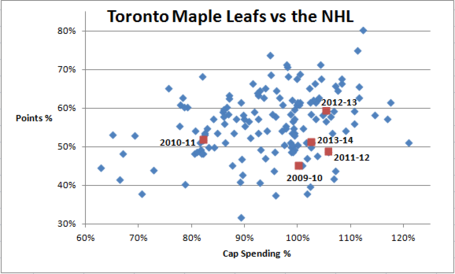 What you're looking at here is a graph of single-season spending against the cap relative to the season's points percentage (the team cap figures are based on the "spending" column from Capgeek's archived cap charts, the salary cap from the wikipedia page). This means it doesn't even account for the LTIR spending of guys like Savard or Pronger (relevant later). The higher the better, the further left, the less it cost you. You want to be away from the bottom right of the graph, because that means you're spending a lot of money and still not putting up a high points-percentage season.

Three of the Leafs' last five seasons have been there. It's important to note that the last Leafs' points percentage season to look respectable was the 2012-13 half season, which I've been assured was the True Representation of this front office's performance.

You're probably wondering: "sure, but what about those other little data points that are further right or further down?" Relative to the 2013-2014 Leafs, there are five years where a team spent a higher percentage of the cap and had worse seasons by points percentage. They were:

The 2013-14 Leafs that set the bar? They fired their assistant coaches without admitting any wrongdoing. Oh, and they hired a new supervisor, who was always going to be brought in, and was brought in with their GM's approval. But don't worry - I'm sure the Leafs' front office suddenly figured out how to maximize their return on MLSE's cap dollars. Have some fun sweating over this graph between now and July 5th. Maybe in the meantime, you can ask your boss for similar job security.

On to some links:

Mirtle: Next two weeks full of possibility, peril for Maple Leafs - The Globe and Mail
Leafs need to improve at C and D - this comment recycled from June 19th, 2013.

Blue Seat Blogs » Joe Thornton and New York an unlikely match
There's a rumor that the only place Thornton wants to go is the Rangers. Are they and the Sharks good trading partners?

What We Got Wrong in the NHL Playoffs
The latest from DGB.

Not really a link: There's a Sportsnet blog by Gare Joyce saying that it would take Kadri, the 8th overall, and one of Gardiner or JVR to get the top pick from Florida. I'm not linking to it because it's horrifically stupid. As if a team could reasonably expect to move two highly skilled, young, long-term-cost-controlled assets and come out ahead. It's sourced to an anonymous "senior exec," which may be Gare Joyce's coffee maker, because it sure as shit doesn't reflect the realistic market price of a first overall pick where neither of the top two draftees are expected to be a generational talent. Or who knows, maybe it's Dale Tallon himself. Just figured I'd mention it so you know it's out there and that you don't have to go look for it.