Milan Michalek? No Thanks.

Share All sharing options for: Milan Michalek? No Thanks.

It's being reported that the Leafs have shown some interest in signing former Ottawa Senator (ugh) Milan Michalek. There's nothing imminent, but there's also very little standing in the way of Dave Nonis making another terrible free agency misstep that could cost the team a lot of cap space going forward. I've already expressed my displeasure at this news in today's Leafs Links, but I thought I might flesh that out a little bit in a separate post.

Darren Dreger speculates that IF Michalek were to be brought in, Joffrey Lupul is the most likely candidate to be moved. Trading Lupul could work well, if done properly, but 1) I'm not sure how much confidence I have in that happening and 2) I don't really see Michalek as an improvement on Lupul. The talk of Keith Yandle in the same, above-linked video is such a crazy hypothetical, that I refuse to discuss it further. Anyway. The point is, if the Leafs want to replace Lupul, that's fine (in fact, more than fine), but I don't think Michalek is the best option, and here's why.

Michalek is only a little over a year younger than Lupul and has only once hit 60 points in his entire career. Sure, he had a 30-goal season a while back in San Jose Ottawa, but his production is slipping with the same kind of curve you'd expect from a guy who is about 30 years of age: 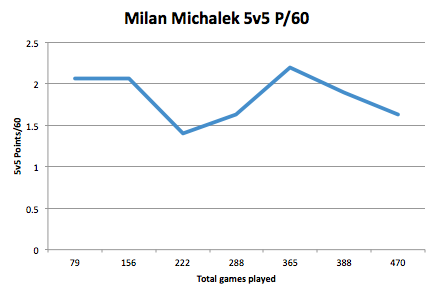 Production isn't a huge problem for Michalek yet, but if you're worried about Lupul's drop-off, you should also be worried about Michalek's. Last season he had an on-ice Sh% of 8.99, which, while not through the ceiling, can't be relied upon to be higher, either.

Behind The Net Numbers

The first thing that jumps out at me is that last season Michalek was 12th among forwards on his team in Corsi Rel, while starting his shift in the offensive zone 57.5% of the time. Let's take a look at his career:

So what do we have here? His Corsi numbers look OK on the surface, but he's had great offensive zone start numbers pretty much his whole career and he definitely wouldn't get anything like what he got in Toronto. His on-ice shooting percentage is generally high, though doesn't seem to drop off much. His penalty differential is pretty average.

Using data from Hockey Analysis In the last seven years, there have been 106 players with whom Michalek has played for at least a single Corsi event, and he's made 56 of those players better. That's a modest win for Michalek, but let's take a look at how that breaks down year by year.

It sure looks like, 2012-13's shortened season aside, that Michalek's ability to make his teammates better is dropping. Three of the last four years have seen him make the majority of his teammates worse.

Michalek is an aging forward, doing about what you'd expect of a guy his age, which is to say that he's producing less, possessing the puck less, and helping his teammates less. Is this a guy the Leafs want to bring aboard? The critical question, of course, is how much he's willing to sign for. If he wants a short-term, low-ball deal then fine. But is that what you'd expect of a pending UFA when the cap is set to rise due to increased TV revenue? Maybe he takes some kind of 1-year bridge deal, expecting the money to be better later, but I'm not sure this is a guy who can help the Leafs for very long.