Let's take a closer look at the deal.

Share All sharing options for: Carl Gunnarsson vs. Roman Polak

It didn't take long for us here at PPP to voice our displeasure at the Leafs sending Carl Gunnarsson (with $200k in retained salary), and the 94th overall pick in this past draft to the St. Louis Blues for Roman Polak.

On a Leafs team that has struggled to stem the flow of pucks heading for their own net, "Gunnar" was a guy who generally helped mitigate the damage. Not particularly flashy, and at times hindered by a hip injury, Gunnarsson was a quiet, calming presence on a Leafs blue line prone to panic.

It's not Roman Polak's fault that he is replacing a player we all thought rather highly of, so we might as well try to get to know the newest member of the team. In fact, comparing the two players' contributions seems easy enough, given they're the same age and play the same position.

I think it's telling that doing a YouTube search for "Roman Polak" yields a list of almost nothing but fights. In fact, one of those fights is against David Clarkson. By contrast, it's not hard to find a few (albeit modest) highlight packages of Gunnarsson making safe plays, laying a few hits, and generally doing the types of things you'd hope for in a "tough" defenceman.

Here, you can see Polak break a 121-game goalless drought. "Boy, that gives a team a lift when a guy like Roman Polak, who does all the little things [Darren Pang trails off]..." You can actually hear the broadcasters' collective amazement as he scores.

Afterwards, in an intermission interview, he says "I know it's not my job to score...". Have we heard that, before?

OK, so Polak is known more for his "toughness" than for his scoring. I guess maybe that's OK, if true.

Brendan Shanahan had a few things to say about Polak in this CBC article following the trade:

The 28-year-old Czech native has 79 points in 424 NHL games, including four goals and nine assists last season. Nonis said Polak would probably "play in the [No.] 4-5 hole" on defence.

"We envision him having a pretty significant impact on our back end," he said.

Despite his size, Polak can also skate.

So even the Leafs, the people who you would expect would support this deal more than anyone, say he's a 4th-5th defender on their own, defensively-terrible team. Given that they traded away a guy who was on the top pair of that same team, wouldn't you think they'd recognize a gap in ability? Isn't the "significant impact" going to be a bad one? For those watching, at least he can skate, I guess.

A quick look at production

Now, if a guy does "all the little things", maybe he won't score, but his teammates should, right? Let's look at his P/60 numbers (via Hockey Analysis) next to those of Gunnarsson's.

Gunnarsson has had a higher P/60 every single year he's been in the league. Gunnar's had more primary assists in his las three seasons, too. OK, so again, Polak's not a scorer, that's... well, it's not good, but I guess we'll accept that and move on. It's not like Gunnar's an offensive dynamo, anyway.

Behind The Net Numbers

Polak is coming to the Leafs from a St. Louis team that is, quite frankly, better defensively.The thing is, it doesn't look like he's the reason why.

His Corsi Rel is bad, his Corsi Rel QoC is ugh, well, it's not quite as terrible, and the thing is, his zone starts were a lot easier than he's going to get in Toronto. His shifts finished in the right zone more often, that's probably teammate-driven. His On-Ice Sh% is low, but we've already established he's not a scorer, so it doesn't really matter, anyway. The guy had a decent on-ice Sv%, so it's not like we can expect him to prevent many more goals than he did last year. The last item is that he took 2-3 times as many penalties as he drew, which I suppose isn't crazy, given that he's a conservative D-man, unlikely to be drawing opposing defenders to him.

Hm. Well, his Corsi Rel looked OK until last season, where it fell off a cliff. Despite that, however, his Corsi Rel QoC looks pretty darn good, so we can tell that he was sheltering a few players who were probably not as defensively capable. His On-ice Sh% and Sv% were both a bit high last year, but I rather expect this to be less of an issue when he plays with the Blues. Moreover, Gunnarsson was working with terrible offensive zone start numbers and those are definitely going to rise after leaving Toronto. Much like Polak, Gunnar took far more penalties than he drew, but as I said above, conservative defencemen don't often draw that much heat.

Overall, the BtN numbers tell a story of two conservative D-men, one of whom looked mediocre on a great team and who will look WAY WORSE on the Leafs, and another who looked mediocre on a TERRIBLE defensive team, and will probably flourish under less pressure in St. Louis.

But let's keep going with this analysis.

Do these players make others around them better? Let's look at Polak, first:

Oh my, Roman Polak does not make things better. He makes things much, much worse. I guess on a bad team it's possible he'd make fewer people worse, but we're clutching at straws, here.

And our dear Gunnarsson? Let's see how many players he's made better:

Woof. Still bad, but definitely not as bad. Gunnarsson improved the possession stats of the same number of player Polak did in two fewer years.

Just look at these charts!

WAY higher competition, significantly worse zone starts, still not quite a big of a hole as Polak. 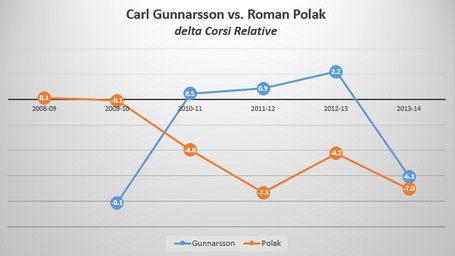 Glove tap to Chi-town Leafs for posting this in an earlier thread, but it looks like dCorsi isn't Polak's friend, either.

"But Gunnarsson's hip is done!"

A lot of people wondered whether the Leafs were simply selling Gunnarsson off while they still could because the defenceman's well-documented hip troubles were supposedly getting to the point that he couldn't play. I sent James Mirtle of The Globe & Mail a quick e-mail if he knew anything about this, and I guess Dave Nonis addressed this point head-on:

Nonis said yesterday he thought he would recover fine:

"The last couple years he’s had issues with his hips. He had that taken care of this summer. He’s a tough kid. He’s a pretty unassuming quiet kid but he played through some pain the last probably three years. He could manage it over the course of the summer and during the season it would flare up as it moved along and by the end he was pretty sore. So you’ve got to give him credit for what he did. I think the surgery’s going to definitely help him long term. I would expect he’ll be pain free all year and that’ll help his play."

I don't think anyone knows for sure.

So as far as we know -- as far as anyone knows --Gunnarsson's hip is going to be better next year than it was this year, and anyone claiming otherwise had better be a medical doctor who has personally diagnosed the issue.

Carl Gunnarsson may not be a top-pairing defenceman on most teams, but he sure as heck is a better defenceman than Roman Polak, who is expected to play 4th or 5th on this team's defensive depth chart.

Gunnarsson was outmatched last season against very difficult competition, but managed to do better against it than other defenders on his team, which in turn helped shelter players like Morgan Rielly and Jake Gardiner.

He didn't make many of his teammates better last season (as measured by WOWY numbers), but over the course of his career, he's helped as many teammates as Polak has in two fewer seasons.

If you heard about this trade and assumed that that Leafs made a terrible defence corps worse, the numbers will tell you that your assumption was crushingly accurate. Maybe the Leafs are tougher, but they're worse at hockey for it. Maybe Polak can fight David Clarkson again or something. That might be fun to watch.

On a comparatively optimistic note, the Leafs' defence corps may not actually be the worst in the entire league, with Buffalo buying out Christian Ehrhoff yestreday. Of course, the off-season in still young.