How did the Leafs forward corps do at gaining the zone with possession in 2013-14?

Share All sharing options for: 2013-14 First Half Zone Entries For Leafs Forwards

One of the more interesting developments in hockey statistics over the past few years has been the tracking of statistics that attempt to tell us how teams and players performed in the neutral zone. Former hockey blogger and current undisclosed-NHL-team big shot Eric Tulsky discovered that performance in the neutral zone appeared to be a more repeatable measure of real talent than offensive or defensive zone performance was. The primary stats that we look at right now to determine what contributions players are making in (and entering) the neutral zone are zone exits and zone entries.

Earlier this month I looked at zone exit stats for Leafs defencemen and forwards. Now it's time to take a look at zone entries. My zone entry posts will also be split in two, one post for defenceman and one for forwards. I'm starting by taking a look at forwards, since they're the ones who are responsible for the greatest volume of zone entries. As with zone exits, this zone entry data covers the first 46 games of the season, is for 5v5 play only, and was lovingly collected by stat-tracking robot Corey Sznajder (@ShutdownLine).

If you're not familiar with the zone entry stat you may be wondering why we track it. Well it turns out that once a player is in the offensive zone, his skill level has very little bearing on the rate at which his team generates shots. Goons and stars alike generate shots at the same rate after a carry-in, and the same is true on a dump and chase. The primary thing that determines the rate at which shots are generated is the ability to enter the offensive zone with possession, either by carrying it directly in or by passing it across the blue line to a teammate. So a player who consistently allows his team to enter the zone with possession has a lot of value in terms of offensive production.

[Note: The "Entry Fail %" column was originally titled "Carry Fail %", which was incorrect.  It is the % of all entry attempts that failed, not just failures on controlled entry attempts.]

A controlled entry is any entry where the player with the puck skates it into the offensive zone or when they successfully complete a pass across the blue line into the zone. Because it was discovered that shots are generated at the same rate on passes and carries into the zone, they're combined for simplicity. Plays where the player dumps the puck and the whole line goes for a change are not included in these totals.

Phil Kessel has an extremely high success rate on his carries and has a low turnover rate relative to the other forwards. This was also true of his zone exits. And Kessel's stats are not just good compared to other Leafs. His 79% success rate is higher than anyone on Philadelphia or Minnesota in 2011-12, or LA or Carolina in 2013-14. Kessel isn't quite at the top of the league but he's 2nd only to Ovechkin among wingers and is generally in elite company.

Nazem Kadri has the next highest success rate, which shouldn't surprise anyone. His rate of failed entries is also rather high though, as it was on his zone exits, which may lend credence to the belief among many Leafs fans that Kadri makes too many risky plays. His failed entry rate stands out pretty starkly among the other top 6 forwards, all of whom have a similar 14-15% failure rate.

After that the team clumps into predictable ranges, with the rest of the top 6 hovering in a band at 51-56% controlled entries, the third line players bunching together below that, and the fourth liners having less success.

Orr and McLaren come off looking particularly bad, as they did with zone exits, although this shouldn't surprise anyone as they're pretty evidently terrible. It does surprise me that D'Amigo looks so bad here, but I have some more thoughts on that to get to once I show you this next chart.

I think this chart has some pretty interesting details that the previous chart didn't. It's even more apparent here just how much of the offence runs through Phil Kessel. No one else is even close to his prowess. One interesting detail about Kessel is that, on a per-60 basis, he has the highest amount of turnovers on the team. It's pretty clear that that's because he plays the puck so often, but it's the kind of thing that can falsely give the impression that he plays risky hockey; he doesn't, he's just got the puck all the time so there are more opportunities to remember his turnovers.

One thing that stands out to me here is how highly Mason Raymond ranks. He had a lot of zone entries last season. He was also one of the better forwards at zone exits. That all suggests that he's a pretty useful player as far as moving the puck up ice and generating offensive opportunities.

David Clarkson looks much better by these measures than he did when I looked at zone exits. He's still only a middle-of-the-team player, not the kind of guy you give premium free agent money too, but he at least comes across looking like a capable NHL forward here, which was absolutely not the case with zone exits.

Tyler Bozak's results are really something else. I'll delve into that in a bit more detail in the next section.

That brings me to Jerry D'Amigo. While his controlled entry rate was very low, he has a very high volume of entries overall. He seems to be doing a pretty good job of getting the puck to the opposition zone, but rarely maintains control once he gets there. This is a situation that we might be able to sort through in greater detail with video breakdowns. Was D'Amigo simply being coached to dump the puck in regardless of his opportunities?  Were other teams pressuring him because his 4th line linemates weren't good enough to provide adequate support?  I don't know, but those are the kinds of things I'd be looking into if I was D'Amigo's team (or if I had a Gamecenter subscription, which I didn't get last year). His zone exit stats were also pretty good, so I think he may have talent that was supressed by his linemates and usage. 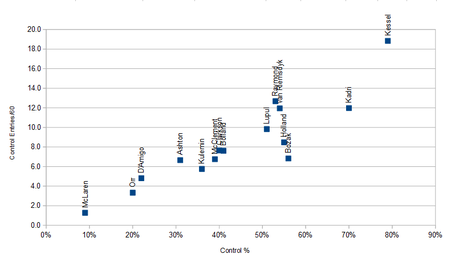 Here's one last way of looking at the data. I've combined number of controlled entries with the success rate to try to indicate how much of Toronto's offence is generated by these players. Kessel is in a league of his own, as I said above. Kadri is also a lynchpin for Toronto's offence.

There's a pretty tight cluster of the rest of the top 6 players after that. Tyler Bozak is an interesting case. He seems to have some skill at entering the zone with possession, having the second highest success rate among Leafs centres and 3rd among all forwards after Kessel and Kadri. The problem is that he just never seems to play the puck. His limited involvement in play was also evident in the zone exit numbers.

I know that people will suggest that Kessel likes to carry the puck (which is true) and that Bozak is simply deferring to his more skilled winger, but I strongly believe that your #1 centre has got to be involved in advancing the puck and generating offence, and Tyler Bozak isn't. Maybe Bozak could contribute more than he does; his success rate suggests that he does have some skill at zone entries. But whatever the reason for his limited involvement, it's pretty evident that Kessel and JVR are doing the heavy lifting on that line and Bozak is just along for the ride. That's a problem.

One other detail that I notice in that chart is Peter Holland's placement. Despite playing limited minutes with lousy linemates, his zone entry numbers suggest that he's a player with a top 6 skill set, at least as far as generating offence through the neutral zone is concerned. His zone exit stats were also solid. Combine this info with Holland's strong junior and AHL scoring, and I think there's a strong case to be made that he deserves a chance to show what he can do in regular minutes with capable linemates.

I don't really have a particularly compelling concluding remark to wrap things up with, so instead here's a video of a whole bunch of Phil Kessel's goals, where some of his zone entry prowess can be seen: