Zone exit stats for Toronto Maple Leafs defencemen through the first 46 games of the 2013-14 season.

Share All sharing options for: 2013-14 First Half Zone Exits For Leafs Defencemen

[Note: Before I begin, I just want to say that most of the heavy lifting for this post was done by Corey Sznajder (@ShutdownLine) who is engaged in an insane effort to track zone exits and entries for all 30 NHL teams for the entire 2013-14 NHL season, which amounts to 1230 games.  If you appreciate this post, you should go chip in to the All Three Zones project where Corey's raising a bit of money to support his work.  I couldn't have written this post without hours of work from him.]

Throughout the 2013-14 NHL season it seemed impossible to have a conversation about the Toronto Maple Leafs without someone mentioning Corsi and whether they thought it was indicative of the team's play.  We all know how the season turned out and at this point I think most people accept that getting heavily outshot every night was a big part of the reason the Leafs lost so many games.  We know that the Leafs didn't get enough shot attempts and allowed too many, so the next thing to start trying to figure out is why they got outshot so badly.  One step in that process is to start looking at some of the events that can lead to shots, like zone entries and zone exits, and see what contributions specific players are making as far as getting the puck up the ice and into better position to score.

Corey Sznajder was kind enough to share with me the zone entry and exit data he's tracked for the Leafs so far, which amounts to the first 46 games of the 2013-14 season.  There's a lot of information across that data set, so I'm going to split this up into a few posts to try to keep it from becoming an info dump.  In this post I'm going to look at zone exits for defencemen.

Let's start with a chart that shows how successful each player on the Leafs was in terms of percentages (all numbers throughout this post are for 5v5 play only):

The most important stat is the one for zone exits that resulted in the Leafs maintaining possession.  By that measure one player clearly stands out - Morgan Reilly's touches resulted in the Leafs exiting the zone with control of the puck at a much higher rate than anyone else on the team.  And the rate at which he carried the puck out of the zone himself is remarkable - it's 40% higher than the next closest defenceman, Jake Gardiner!

The gaps between the rest of the players aren't as big, though Jake Gardiner is clearly the second best player in terms of zone exits with possession, while Cody Franson, Dion Phaneuf, and Carl Gunnarsson all have nearly identical results.  Paul Ranger's results look pretty bad, but Mark Fraser's look abominable.  The Leafs were only able to exit the zone with possession once out of every ten times Fraser touched the puck in the defensive zone.

The Leafs were only able to exit the zone with possession once out of every ten times Fraser touched the puck in the defensive zone.

One other thing that jumps out to me here is the turnover percentage.  The lowest rate of defensive zone turnovers on the team belongs to Jake Gardiner, and by a fairly wide margin.  Dion Phaneuf, Morgan Rielly, and Cody Franson all bunch together in the 8% range, while the highest turnover rates belong to Paul Ranger and Mark Fraser.  While the sample size here isn't enough to draw broad conclusions about the entire NHL, it looks at a glance here like the players often thought of as "risky" like Gardiner and Reilly aren't making a lot of mistakes in the defensive zone, while "stay-at-home" defenders Paul Ranger and Mark Fraser turn the puck over fairly frequently.  This is another little bit of evidence that puck-moving defencemen may not be the defensive liability they're often said to be.

Zone exits are typically displayed as a percentage of touches, but a conversation I had with Steve Burtch on Twitter got me thinking about this data in another way.  We can look at the Possession% to see who's leaving the zone with possession efficiently, but another question that we might want to answer is "Who is better at gaining control of the puck in the defensinve zone?"  After all, if Morgan Rielly is great at skating out of the zone with the puck but he never actually has the puck, maybe his zone exits look less impressive.  So here are some of the exit numbers recalculated to be rate stats rather than percentages:

Cody Franson also looks very good by these metrics.  He gains possession of the puck in the defensive zone more frequently than any other player on the Leafs and his rate of exits with possession is a shade better than Jake Gardiner's.  I've spent a lot of time boosting Cody Franson over the past few seasons and these numbers enhance my belief that he's a good defenceman who looks bad to many people because of the system he plays in rather than because of his talent.

The one thing that really jumps out here is how rarely Dion Phaneuf played the puck in the defensive zone.  His 56 touches per 60 minutes are far lower than almost anyone on the defence, even Mark Fraser.  There's a lot of debate over Phaneuf's value among Leafs fans, but I have to say that I find it hard to believe that anyone believes that Phaneuf is the least defensively capable player on the team, so I'm finding this result very puzzling.

Draglikepull measured puck possession with a stop watch. You won't believe what happened next.

Something wasn't sitting right with me after looking at the data in the above chart.  Sometimes when the data doesn't match what we see it's because there's something we're not seeing that we ought to be, but other times there's a problem with the data or our interpretation of it, and it's worth trying to find a way to double-check the result to see if we can produce a more clear answer.  My initial thought was that having a lot of touches in the defensive zone would correlate with skill at gaining possession in the defensive zone, indicating defensive acumen.  But there was a problem with that: I knew that the Leafs allowed more shot attempts when Morgan Rielly was on the ice than any other defenceman.

I decided to see if there actually was any kind of correlation between shot attempts and touches or exits.  So I put together some charts based on the shot attempts for and against the 6 Leafs defencemen who had at least 500 minutes of 5v5 ice time in these first 46 games.  Here are the results (click for full size): 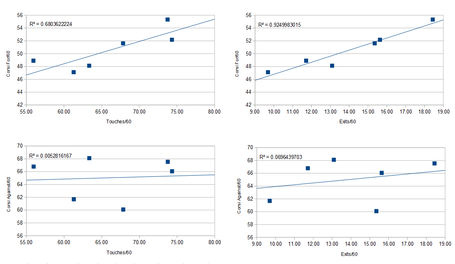 You don't need to look very closely to see something that's pretty clear: both exits and touches correlate far more highly to Corsi for than Corsi against.  The correlation between exits and shot attempts for is extremely strong, as we would probably expect.  But the correlation between touches and shot attempts against is virtually zero.  Gaining the puck more often in the defensive zone seems to have almost nothing to do with shot prevention.  Why not?  I don't know.  I'd love to hear any ideas that people have in the comments.  It's possible this is just a sample size issue (only 6 defencemen for half the year) but I don't think so.

So where does that leave us?  I can't say.  While Dion Phaneuf doesn't have very many puck touches on a per-minute basis, that stat doesn't seem to have very much to do with shot prevention, so I don't think we can use it at this time as a basis for describing defensive capability.  Indeed, in general there seems to be little relationship between the defensive zone stats we have here and shot prevention.  These numbers correlate very strongly with offensive output so I think it's safe to say that, for example, Morgan Rielly's play in the defensive zone is creating more offence than anyone else's.  But as to how any of these players are doing defensively, none of this data is pointing us in a useful direction.  We'll have to find other ways to determine defensive skill.