Yes, it would be more fun if I meant shots of tequila, but no.

I meant charts! Below, you will see the Leafs D, arranged by time on ice per game, lowest to highest, and showing all the types of shots they are on the ice for.

For the offence chart, simply substitute for for against, and there you are. 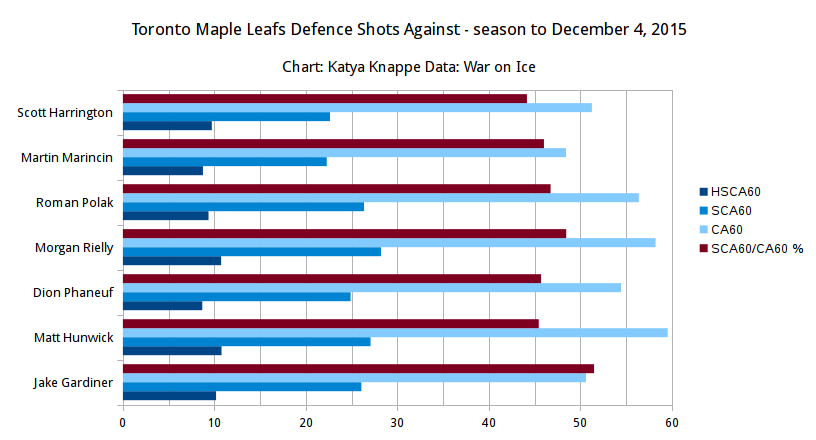 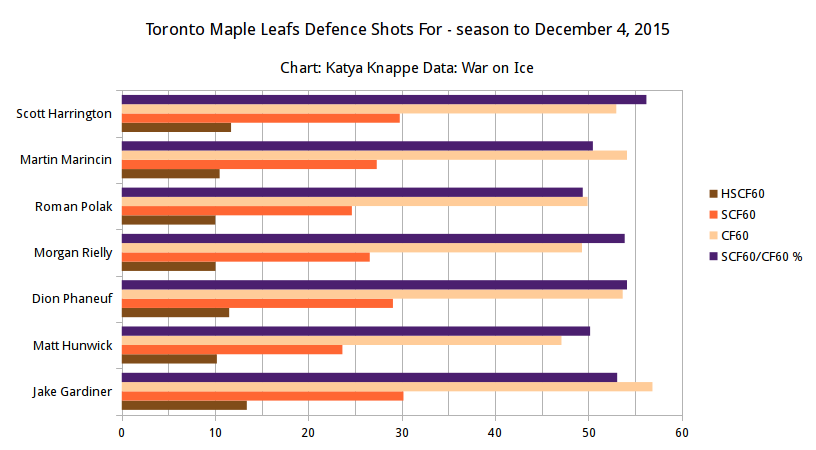 There are some red flags here. I think the high percentage of scoring chances against for Jake Gardiner and Morgan Rielly is one, as is Rielly's and Matt Hunwick's large amount of high-danger shots against. Concerns about Gardiner's defensive play are genuine, but often dramatically overstated.

Everybody needs their total shots against lower, but Dion Phaneuf and Martin Marincin both look pretty good here. Marincin has a lot fewer total minutes on the ice, so use more salt with him. Rielly and Hunwick look very bad, but remember the forwards they are on the ice with, which I think is more meaningful than who they play against.

The low percentage of scoring chances against for Phaneuf and Hunwick may be one numerical value for what Mike Babcock sees in those guys that so many fans don't. Shot differential tells you how much time the guy spent in the defensive zone, this percentage tells you a bit about how effective it was. Think about that when you imagine Gardiner and Rielly on one pair and Phaneuf and Hunwick on the other.

The offence chart, which is here mostly just to show who is helping to generate scoring chances, shouldn't surprise anyone--Gardiner and Phaneuf are the drivers there, with Rielly on ice for a very high percentage of scoring chances, perhaps due to his own shots.

What would I do to improve this D corps? Ignore Hunwick, Roman Polak, Marincin, Scott Harrington and especially Corrado and go looking for the next Barrett Jackman.