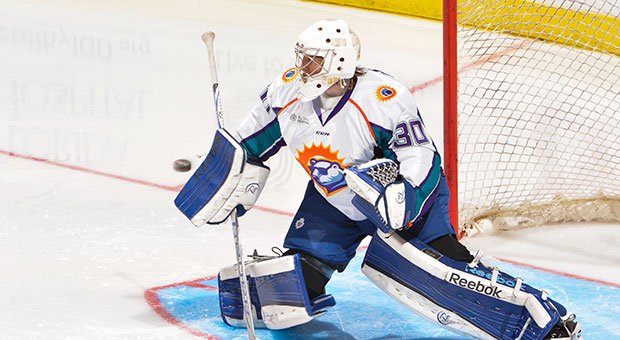 For those of you who follow the SUPER AWESOME Orlando Solar Bears, you will recall that Leafs prospect and goaltender Garret Sparks spent the first part of December feeling pretty miserable. Not only was he sent down from the Marlies out of training camp because two goaltenders were doing better than he was, he was forced to sit out of nine games due to a lower-body injury.

"No big deal," you might think. "He can recover." Sadly, the poor guy had to recover as best he could while bouncing around in the back of a tour bus on a 13-game road trip. Kylethereporter covers Marlies and Solar Bears news, and wrote about his rehabilitation:

"It’s nice to be at home, it’s a different environment," Sparks told reporters after returning to Florida. "Rehabbing the injury on the bus was a difficult thing to do.

"There wasn’t much time for me to practise and get my legs under me. It wasn’t a favourable situation. I pushed it, tried as hard as I could to make it a smooth transition but it was something that just took time."

With limited practice time, the Leaf prospect returned to action and showed evidence of rust as he was pulled in his first start after allowing five goals on 17 shots in 22 minutes of action. (Source)

Sparks was so happy to return to Orlando that he's been doing well ever since.

After a meh December that saw the Solar Bears go 4-5-1 in ten games, the team ended January tied for 5th in the Eastern Conference, East Division with a solid 5-2-0 showing. January had a shortened schedule due to the ECHL All-Star game, hosted by the Solar Bears at Amway Arena. (ECHL Standings here!) (My lazy recap of the All-Star Game here.)

January was newsworthy for a few reasons. Sparks recorded his second shut-out of the season on January 30th over the visiting South Carolina Sting Rays (4-0). The teams came into the game with Carolina one step ahead in standings, and ended tied for 5th. Sparks' record for the season is 9-3-1, plus some air guitar.

Sparks had 40 saves to improve his record to 9-3-1. It was his second shutout of the season.

"This homestand has helped me out," he said. "But to be honest, it has become second nature for me now."

Also notable in January was the go-ahead from Winter Park to break new ground for the Solar Bears' new training facility and community center, someday to be named the Orlando Hockey Center.

The center will be smack-dab in the middle of one of the poshest neighborhoods in Orlando, and will boast two rinks and MUCH nicer front offices for management. The Solar Bears are currently renting training space from RDV SportsPlex in Maitland, and (to be honest) the place is fine for the community but not for a well-heeled professional hockey team.

If you feel like reading about each game in glorious detail, the Orlando Sentinel covers them over here, and Kylethereporter covers them in his ECHL tag here.

I will leave you with this inspirational photo of Shades, the relaxed southern brother of Carlton. 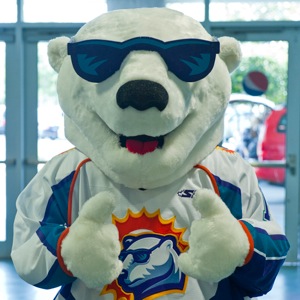