I'm tired of being grouchy, and critical all the time. Sure, I’m a Leafs fan, and what we've seen both on (and off) the ice hasn’t been pleasant this year.

But I’ve decided. I'm going to change my approach.

But still. Rather than simply doing negative analysis stuff and hacking my way through stats toward a conclusion that just makes me want to vom, I’ve decided to do some work that is...

No, not really Shanny. I’m a blogger. And thus, lie for effect.

Anyway. Cramp or no, I’ve decided to harness my massive forehead (seriously Shanny, my head's like a fucking streetcar tied to the top of my spine, and it's chockfulla brains.)(Chockfulla.) Anyway, where was I, oh yeah... brains... harnessed... to the task of producing constructive advice.

And so, today’s 3 thoughts are offered for your eyes in the spirit of constructive goodwill.

Sorry. Back to being constructive. Had a bit of a spell there.

The hockey media says your friends amongst the playoff-bound GMs are frothing mad for Antoine Vermette.

But only warmish about picking up Daniel Winnik.

Let's move a few relevant facts about Winnik out into the wider media, just to... you know... drive up Winnik's value.

See, the media mouthpieces all say that Vermette is a pretty high-scorer, and a centerman who’s great on face-offs. Say those two things often enough, and NHL media types basically topple onto their backs and start kicking their legs with glee.

Anyway. I did up a little chart to help people compare the two. 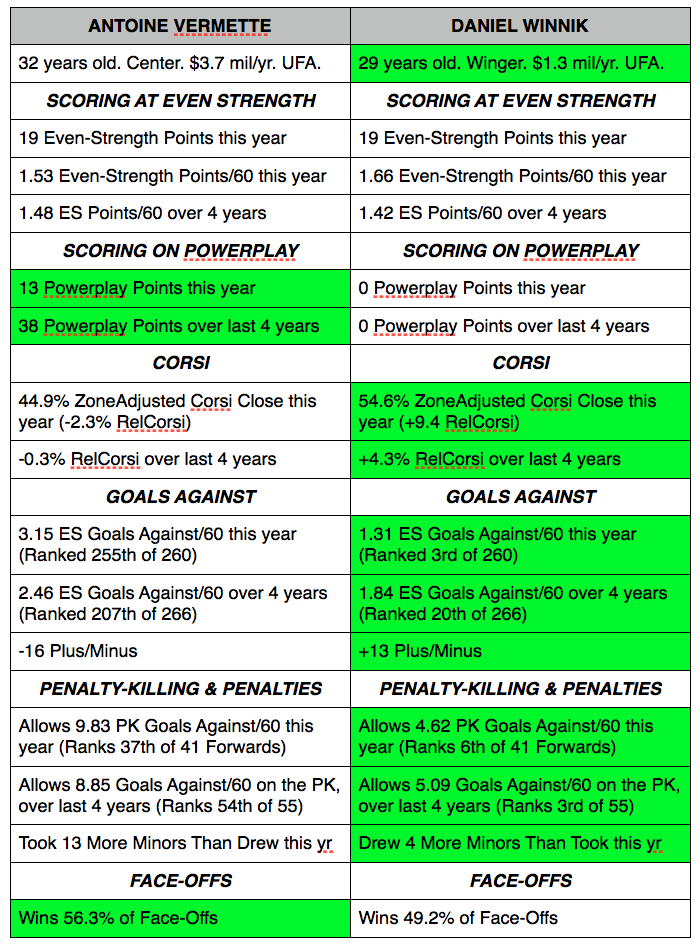 There's a lot in there, so let's walk this one through.

Vermette makes $3.7 million per season, Winnik makes $1.3 million. Both are free agents at the end of this season. Another win for Winnik.

Vermette has 34 points this year, versus 22 for Winnik, which would seem to say Vermette is a much better offensive player.

The only problem being that Winnik is actually doing better than Vermette this year in terms of even-strength scoring, with 1.63 points per 60 minutes, versus 1.53 for Vermette. And in fact, going back over the last 4 years, the two are effectively tied, at 1.48 versus 1.42.

Which is to say, Vermette’s only going to outscore Winnik IF you’re prepared to give him some big minutes on the PP. And ahhh, while I don’t want to do tooooo much research for the league‘s GMs, Vermette isn’t actually... very good on the powerplay.

As in, over the last 4 years, Vermette has only scored 3.32 points/60 minutes on the Powerplay. That ranks a really quite bad 115th out of 125 Forwards. And - just to help set the bar here - Vermette's powerplay prowess ranks just 6 slots above David Clarkson.

You other league GMs might wanna think on that.

Now. When it comes to the defensive side of the game, the hockey media are positively drooling over the fact that Vermette is so good at face-offs. And he is. He’s winning 56% of them this year so far. He’s Top 10 on the draw this year, and most years.

Now. the thing is that winning face-offs is supposed to translate into more goals scored for your team, and less for the other guys, right?

Except with Vermette, it’s not quite that simple. Just compare him to Winnik. Vermette’s face-off prowess is NOT leading to more goals scored at even-strength, right? And on the powerplay, it’s NOT making him better than other team’s forwards.

So how abut we look at Vermette’s defensive play? Surely, winning all those draws must mean he has a better Corsi (because they possess the puck more), and give up fewer goals against, right?

Well, Corsi says no. Winnik wins. Even Zone-adjusted, Score Close RelCorsi says says Winnik wins, and by a long yard. Winnik is a whopping 11.7% better this year, and 4.6% better over the entire last 4 years than Vermette.

And how does that translate into goals against? Well, when Daniel Winnik is on the ice, the Leafs have allowed just 1.31 even strength goals against per 60 minutes this year. That makes him the 3rd best forward of the 260 in the NHL. And that’s as a Leaf.

Antoine Vermette has allowed 3.15 goals against, a terrible record, placing him 255th of 260.

So Daniel Winnik is gonna keep waaaaaaaaay more goals out of your net over a season than is Antoine Vermette.

EVEN THOUGH VERMETTE IS WINNING ALL THOSE FACE-OFFS.

Want an old-timey stat? That kinda shows this? Remember Plus/minus?

One last category. Penalties and playing on the PK.

Killing penalties. Useful in the playoffs.

Plus, salt in the wound, Vermette has taken 17 minors this season, a whopping 13 more than he’s drawn... while Winnik has only taken 7, but has drawn 11.

So. What do we have here?

Vermette can play the powerplay, just not very well. And he’s great face-offs, which is fine, except that his wider game then basically throws that advantage away.

So. Shanny. Try to make sure the league’s other GMs understand they are being sucked into, once again, over-paying for a guy (Vermette) who is hugely over-rated... while ignoring a guy who is hugely under-rated (Winnik.)

Then tell them we want a 2nd AND a top prospect.

#2. READING BETWEEN THE LINES.

Now, on this next thing Shanny, you may need to read between the lines a bit.

Josh Gorges, defenceman for the Buffalo Sabres, has a 34.5% Zone Adjusted Corsi this season.

Amongst regular players, Gorges’ Corsi is the worst in the NHL.

In fact, it’s the worst Corsi rating going back, ohhhhhh.... as far as the stat goes.

Remember how bad Holzer was a few years back?

I know, you think it’s just because of the Sabres, don’t you?

I can see you scrambling around, looking for something to defend him with... how about maybe that whopping 6 assists in 46 games.... no, hmmmm..... or maybe that -28 plus/minus.... ok, not really.... so, errrrm, maybe, hey, how about when he was with the Habs? He was quite good then, right?

In 7 years with the Habs - who weren’t what we Leaf fans would in any way understand as a "bad" team during that time - Josh Gorges played roughly 450 games. And had just 88 points. That 12 or 13 points per season is actually what we’d describe, in the vernacular, as "sucking." To be more statsy, he ranked 155th of the 186 most regular D-men over that period for offence, as measured by Points/60.

So... maybe Gorges was good defensively?

Corsi-wise - and this is playing for the Habs remember - Josh Gorges had a 7 season overall Corsi of 47.1%.

That’s 163rd of 186 D-men. Just behind Mike Komisarek, and just ahead of Jack Johnson.

And at the time Nonis tried to get him, Gorges had 4 years remaining on his contract, at $3.9 million a year.

Whereas Cody Franson was 27. And was entering his last year on a $3.3 million contract.

Like I said, Shanny. You may need to read between the lines a bit on this Gorges thing.

On April 11th, Shanny, the Leafs close their season at home against Montreal.

that game will suck.

It will also suck because Dion Phaneuf will have turned 30 the night before. And the commentators will talk about it endlessly, and it’s likely to be one of the last facts mentioned about a Leaf player as the televised regular season ends.

And this is important because turning 30 is a big deal. It’s a big frigging round number, easily the most important one when GMs and fans and such evaluate where a player is in his career. Because after age 30, you’re almost certainly going down the slope, in terms of overall durability and performance.

Which is why we need to trade Dion Phaneuf NOW, Shanny, BEFORE the deadline.

And not wait til Summer.

Now, as a player, Dion’s been a war-horse. He has played his guts out.

But. He also has 6 years left on his contract, at $7 million a pop. Now, a bunch of people out here are Dion fans. And good for you. But from where I sit, I’ve never much liked him. He just doesn’t... move me. It’s partly the shoes,and partly the INTENSIFIER FACE he always wears.

But even when there’s a player I kindof don’t take to, I can still be impressed as hell by him, and what he’s accomplished. Like Dion.

Because Dion Phaneuf has accomplished a tonne. Let’s tote up a few:

I think you see where I’m going, Shanny.

That’s a heck of an achievement.

Think about the physical and emotional toll that would pile onto a human being.

Now. I think you can see why there’s really only one Dion-relevant question in play, which is... When best to trade him?

If you wait too long, you risk being stuck for years 3 or 4 or 5 or 6 years of that $7 million a year payload, which you may be shifting to a guy who has really, seriously, slowed.

And so, my friend, if you’re thinking you’ll trade Dion this Summer, in addition to all that MILEAGE, remember this one other thing:

And obviously, other teams have lots of good reason to want a Dion. He’s a great guy to have for a playoff run. He can can play 20+ minutes, either side, can play the PK, work the PP, fight, block shots, play with rookies or veterans. And can handle the media heat.

But to make deal this Summer, with Dion having one less post-season run in him, and with a sticker price and mileage chart that reads NOW JUST 30 YEARS OLD?

IN THE FEW WEEKS REMAINING BEFORE HE TURNS 30.

I hope these thoughts have been helpful Shanny, and that we can continue our constructive conversations in the future.

Your friend, and a guy still quite a bit older than you,

Why Not Norm should be Shanny's new best friend.