The old hockey cliche of "A player you hate playing against but love having on your team" needs to be taken out behind the barn and shot but let me suggest that Brendan Leipsic is as deserving a final candidate for this complement as any. On the ice, Leipsic earned the nickname "The Little Ball of Hate" while he was a Portland Winterhawk, which is of course hyperbolous but captures the fact that he models his game after the infamous "agitators" of the 90's. He enjoys a good fight, throws many a hit and loves to interact with the opposing team in a variety of interesting ways.

Thankfully, unlike many of the players who are a shallow but accurate comparable to his skillset, he is not a douchebag.

(I'll give you a second to breathe a sigh of relief.)

In fact, he is about as far from it as possible (the above picture is a good example) and is as charming, fun and humble a person as you'll find in pro hockey. Additionally, it very much seems to have been a phase and Leipsic has gone from a 100+ PIM per 60 games player in the W to a more well rounded and composed player in Milwaukee while only recording 16 PIMs so far in 47 AHL games. This is nothing but exciting as the ceiling of Brendan Leipsic is a very promising one at NHL level. At very best, it seems like he could be a forward who could score 30-50ish points, play a very sound possession game and excel in defensive situations (A less vertically gifted Ryan Kesler ideally). His floor as an NHLer would be closer to a poor man's Leo Komarov. His speed, vision and skating ability are superb and he is a highly intelligent player who reads the game very well. 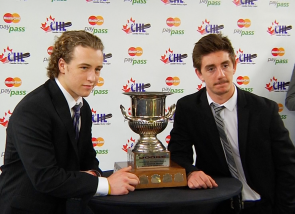 Petan and Leipsic sharing the CHL top scorer award in 2013.

Statistically, it has been hard to gauge exactly how good a player he was in junior as he has spent his entire WHL career on dominant Portland Winterhawks teams almost always playing with elite linemates. That said, he has produced at a highly respectable rate and ended his junior career with 302 points in 261 games (1.16 PPG). He was the leading scorer in the WHL (and CHL) in 2012-13 with 120 points (tied with linemate Nic Petan). For reference, here are a sampling of the forwards and defensemen he has spent the most time with from year to year. I can confirm that he spent the entire 2012-13 season beside Ty Rattie and Petan and 2014 seems like a swap of Rattie and Bjorkstrand but the other years are a mystery to me. Nevertheless it is a consistently Memorial Cup group of talent and should serve as an asterisk to his scoring rate:

It's impossible to tell exactly how much of his production comes from being simply talented and how much is aided by an awesome situation (the Winterhawks only lost 44 regulation games in his prime 3 years there) but the fact that he stepped into the AHL this past year as a 20 year and is among the rookie scoring leaders only bodes well. He has been one of Milwaukee's core contributors so far, leading them in assists and fourth in shots among a very good core of young forwards. His play has earned rave reviews from coaches everywhere and he was a strong candidate for a call up in the near future. To further assess exactly where Leipsic could end up as an NHL player let us examine forwards who scored at a similar rate to him in their age 20 season in the AHL:

An interesting group of players with a surprising amount of quality NHLers and even a former Leaf. At the end of the day, the future is bright for this young player and if all goes well he could be a highly valuable forward for the Toronto Maple Leafs for a long time. Just for fun, and to celebrate how awesome Brendan Leipsic is, here is a series of GIFs from the time that he drank from water bottle of the opposing goaltender in the WHL.

Yes, he was given a 2 minute penalty on the play.

Yes, hockey is run by people who are no fun.

Yes, Brendan Leipsic is here to change that :)