The main question when it comes to tanking in the NHL that inhabits the mind of General Managers is whether it is indeed worth spending 3-5 years at the bottom of the league, leaving your fans with little to root for on a nightly basis. I am writing this to prove that not only is it indeed worth it but it is a highly advisable strategy. Any team without a hope of future contention (The New Jersey Devils are a perfect example due to a mediocre old roster and a pathetic farm system) would be wise to drop down to the lower reaches of the NHL in order to give themselves massively increased odds at the best talent available. Let us then look at exactly why it is an ideal strategy in that scenario through our bestest buddy in the whole wide world: Statistics!

I chose the time frame of 2001 to 2010, a ten year period recent enough to be familiar and long ago enough that even the youngest players involved in this study are entering their NHL primes. We will then look at all the data available from those drafts in order of determining exactly how crucial it is to have a pick within the top 5. To start, here are all the players selected within the top 5 of the NHL draft from 1-5 from 2001 to 2010:

The following chart shows the totals from those draft years, in terms of NHL games played by all draftees per year, sorted of course by Top 5 and 6-30.

The Top 5ers have accumulated 13,298 points while the rest of the entirety of those first rounds has accounted for 23,641 (aided by an insane 2003 draft class) which is amazing considering there have been Five times as many players taken from picks 6-30 in that span. Per player, the average Top 5er has tallied 266 career points while the average 6-30er has scored 94 for their career. This may not knock your socks off but consider this a foundational exercise, the meat of the study is imminent.

We will now dig a little deeper, looking at exactly where all 300 players in this study ended up, career wise and what exactly the value of picking in the top 5 is. Here is data showing the type of career of each drafted player:

As a helpful visual aid I made two charts to give a colourful idea of exactly where these picks end up. 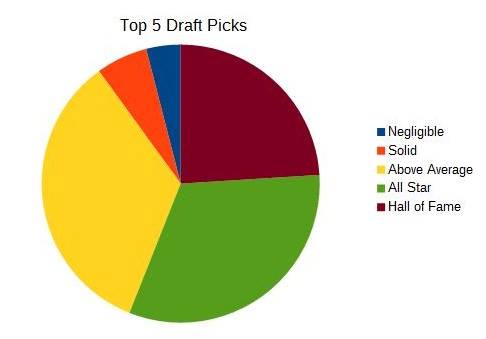 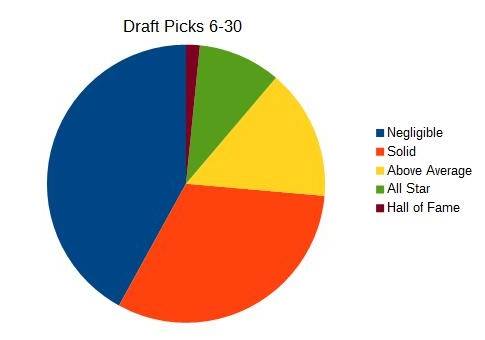 As we can see, the numbers are monumentally in favour of tanking in every sense. Some key points:

For reference, my list of HOF level players is as follows:

Interestingly the two Top 5 busts came from the same draft (Stan Chistov and Alexandr Svitov in 2001).

In Conclusion, we can see that Tanking in the NHL (Especially while employing a smart GM and a talented scouting staff) is as good a strategy as any in sports and should be used by any team with a bleak future and no hope of contention in the near future.