The following is the first story in a special series on past playoff games in a 'this day in Leafs history' type format. We encourage everyone in the community to submit FanPosts for storied playoff games they remember, from childhood, or otherwise. Let's celebrate the playoff hockey that is longingly missed.

A mere two days after trouncing of the Senators in game 7, finally ending that brutal series, the banged up Leafs made their Conference Final debut in Raleigh, sneaking in a much needed victory to start the series. 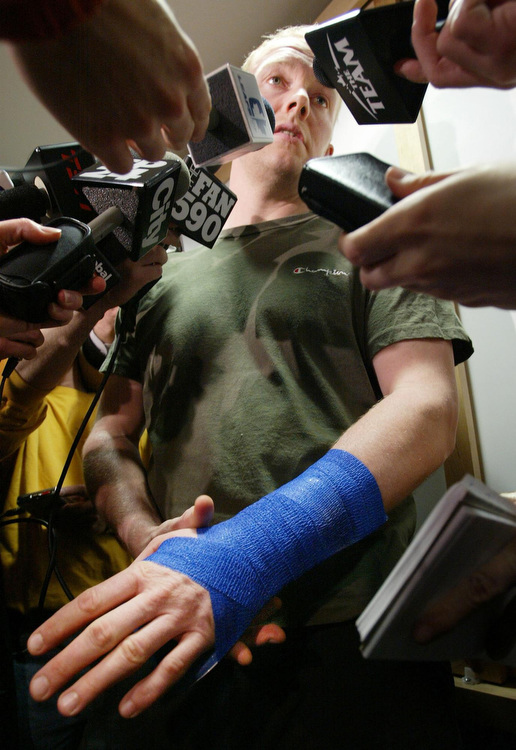 The team has now clarified he has a hairline wrist fracture, and may be done for the playoffs. Further evaluation will be done tomorrow.

Last night was the time for the the rest of the team to prove they can and will step up and push through in his absence. Pat Quinn was asked about the situation and said that he tries not to think about it. "You know, as a coach, you're one of the leaders of the team, so you can't show an emotion that indicates that we've lost some people; and therefore, what's the use.

Quinn added "We worked hard and long to get here. And look around, let's see if we can do it with what we've got and why can't we. I think that's just an attitude that you have to have when you're in team sports."

The first period started with a brutal hit on Tomas Kaberle by NHL rookie Erik Cole, sending him into the boards, and then falling with his head snapping back on the ice. Fortunately he appeared fine and didn't miss much game time, playing almost 30 minutes along with Brian McCabe.

The Leafs didn't make it easy on Cujo, an early penalty by Travis Greene for interference, followed by a holding call on Kaberle, which gave Carolina a 5 on 3 power play. Jeff O'Neill quickly scored giving the Canes the lead only 3 minutes into the game.

Just four minutes after the Canes scored, Mogilny beat Arutrs Irbe and the game was tied. The Leafs went on to take four more minor penalties in the first, but fended off the Canes power play each time.

In the second the Leafs took another three minor penalties in the first 10 minutes, then a call finally went their way and Aaron Ward was sent to the box for hooking. On the ensuing power play ex-Hurricane Gary Roberts set up Patrick Dempsey to make a beautiful shot that Jonas Hoglund tipped into the net.

Irbe immediately insisted Hoglund's stick was above the net and the play was sent for review, but the call on the ice was left to stand and the Leafs were up 2-1.

The third period saw the Hurricanes on the receiving end of the refs wrath, taking three penalties and giving the Leafs valuable power play time to defend their lead. Hoglund hammered a shot of the post, but ultimately the game ended 2-1.

Cujo was outstanding, posting a 0.961 sv%. Pat Quinn said post game he was confident in Cujo leading the team. " I think he's getting the feel back. He's always been, to me, not the kind of goalie you write the textbook on. His terrific ability to me is reading the play and he gets himself in the way and he makes the stops. That, to me is his big strength. I think he's getting that feeling back, or has it back."

Canes coach Paul Maurice didn't seem bothered by the game 1 loss. "It's a hockey series. There's teams deflating teams every game in the playoffs and you're not happy about it. But if you had a tough first game and wanted to call the series, you wouldn't be around very long."

Irbe elaborated on the first goal, still believing it was a high stick: "I made the motion to the ref and he said, "I'm going upstairs." So I know it was high and I saw the shot and I had my glove covering the net. The puck was going a little bit far and a little bit high, so from my judgment -- you know how the tennis players are. They always know if the ball is going to hit the baseline or it's going to be over or in. That's how the goalies feel about those posts and frame of the goal. They usually know if it's going in or not. Obviously, it was a heck of a tip. It was on the borderline and the call went their way, and the game went their way."

Irbe added "That's the way it goes, so hopefully wet get our breaks the next time."

With so many important pieces out with injuries, this was a huge win for the Leafs. If they can keep this up, and keep slipping shots past Irbe, it will truly feel like the Cup is in their grasp.