Sportsnet has heard your complaints about HNIC, and dismissed them

"You don't want to let the dozens of people on Twitter tell you what to do."

Share All sharing options for: Sportsnet has heard your complaints about HNIC, and dismissed them

Yesterday, Sportsnet and TSN got in a tiff over who was "Canada's number one sports brand". They both sliced and diced the ratings numbers many different ways, and published those that were the most favourable to their own network.

Chris Zelkovich at Yahoo does a great job of explaining the intricacies of how they can both claim such a title, but the reality is Canadians don't really care.

It's all about advertising dollars. Networks want to tell a good story to advertisers, and the best story is that they have more eyeballs on the screen than anyone else at any moment. Especially prized are the eyeballs located in the sockets of people with lots of disposable income.

While all this was going on, Scott Moore, President of Sportsnet and NHL properties at Rogers, got some quotes out to the media about what was going on with hockey coverage.

I think Strombo's settled in really, really nicely. The playoffs were terrific for him and we expect people to grow even more used to him next year.

You see, if you didn't like him, or criticized his performance, it was only because you weren't used to him. He's fine. You are the problem. Apparently they have forgotten Strombo scored only 5.7 out of 10 in a viewer survey.

I thought we found that right mix on Saturdays with the panel, which was our prime playoff panel, with (Nick) Kypreos, Kelly Hrudey and Elliotte Friedman. Are we there with that on Wednesday? I think we’re going to do some tweaking,"

That’s a fair criticism, that because we have so many games on so many nights, we just physically needed bodies to be on the panels. And I tasked the production guys with finding the best mix (or people).

As long as they are former players, right? Why are there still no women hockey players contributing to the panels. Why is two time Olympic hockey gold-medalist Cassie Campbell-Pascal relegated to a hallway in the arena asking players "Did you sports hard in that period?" What about a numbers guy like Travis Yost, who could bring an alternative perspective to that of a player who has been out of the game for more than a decade.

When you tune into a drama you want to know who the cast is. That’s a priority for next year.

Ah. Right. It's about drama. This isn't an informative sports broadcast. It's a soap opera. That's why we have to have silly arguing and shouting.

It's not hard to find complaints about all these issues with the Rogers broadcasts, unless you live in the fantasy world of a Rogers executive.

The big danger in our business is you're programming for millions of people — you don't want to let the dozens of people on Twitter tell you what to do.

You see, if you don't like what Rogers is doing, you're just one of the "few dozen" people who use that obscure Twitter thing.

Rogers says it has minute-by-minute tracking of the NHL viewing audience, likely through digital boxes and GCL, and that it doesn't show a drop in viewership at intermissions. If we believe that is true, it still can't catch people who mute the broadcast, go do something else for 15 minutes, or watch and vent about the stupidity on Twitter.

Perhaps Sportsnet would best remember the words of someone else who ignored his internet detractors that pointed out things were worse than he believed. I hear he's looking for a new job these days. 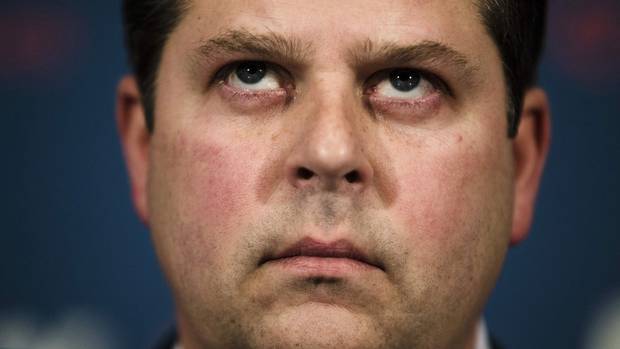