From the Branches: What is going on in Pittsburgh?

More than a month has passed since a group of investors was reported ready to make an offer for the Penguins in "one week."

Share All sharing options for: From the Branches: What is going on in Pittsburgh?

This summer's big news for Penguins fans was the acquisition of Phil Kessel in a blockbuster trade with (though not so much for) the Maple Leafs. The trade overshadowed some other big news that was announced a month earlier: TSN reported Penguin's owners Mario Lemieux and Ron Burkle hired investment bank Morgan Stanley to advise them on the sale of the team. The timing sounded right; with hype building from possible NHL expansion and half billion dollar expansion fees, it sounded like the league had nowhere to go but up.

In mid-July the Pittsburgh Business Times reported "A group of investors expects to make an offer to buy the Pittsburgh Penguins within the week." This was not just a purchase of the team, it also would include lucrative real estate holdings in central Pittsburgh. Things looked on track for a quick sale, and a big payday for Lemieux and Berkle, now but 6 weeks have passed and not a peep has come out of the Consol Energy Center.

No business deal of this magnitude takes place instantly, especially one involving real estate. There are contracts to be drawn, reviewed, red-lined, revised, reviewed again, and finally signed. All parties will take as much time as allowed to investigate anything remotely related to their investment: taxes; environmental concerns on site;  are there any city plan or zoning issues; does it make sense to borrow money to pay for it now, or will it be cheaper later?

These things take time to sort out, but it's surprising to hear nothing more in the time that has already elapsed.

Is it possible that the expansion process is having an impact? Do the rumours of NHL Governors' reconsideration of Quebecor's bid for a team, even at a US$500M expansion fee, indicate concern about the mid-term financial prospects of the league? Has the ~25% drop of the Canadian dollar over the past two years frightened them into reconsidering their purchase?

There are many questions, and, of course, no answers. No one in this league shows their cards unless they think it will help them get ahead. All we can do is speculate blindly; the most frustrating, but exciting speculation of all!

Anyway: it's too hot today. 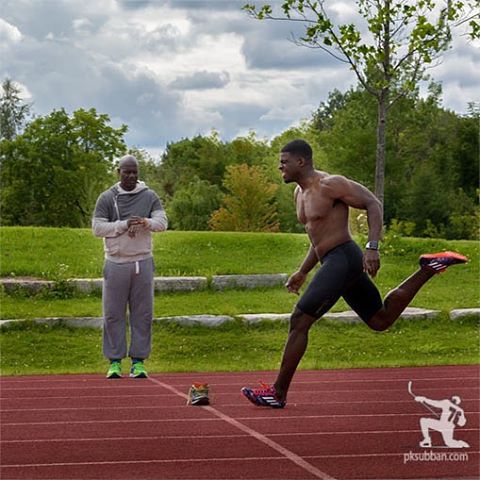 How NHL players rest, recover and rebuild over the summer to prepare for the long, grueling season - National Post: By the end of the season, players hobble off the ice with an assortment of nagging injuries — some may need surgery — and are physically drained

Subban sure looks in good shape for the season.

I assure you JvR is in top shape as well. He's been getting a lot of cardio.

Could Lundqvist return to Frolunda? Did you know he has an identical twin brother?

Maple Leafs' Top 25 Under 25 - #10 Martin Marincin - Pension Plan Puppets
Don't forget to comment on our Top 25 Under 25 Series. Number 9 will be revealed later this morning.