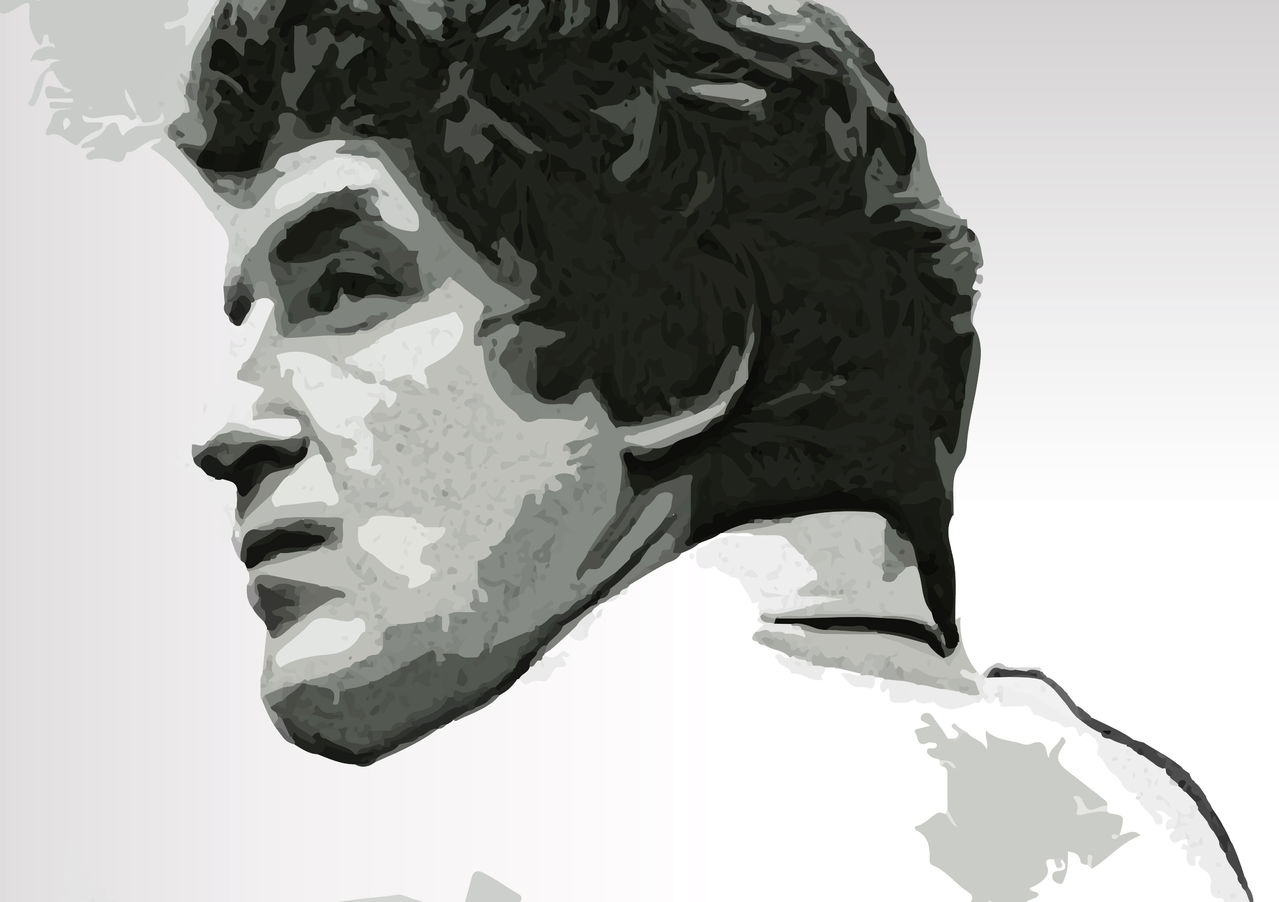 Opponents knew better than to provoke the wrath of Brian "Spinner" Spencer. Self-described as "genetically violent," he was known as a hockey player not to be trifled with. The Globe Magazine published an article in 1971 titled "A Capacity for Anger," in which author Martin O'Malley describes Spencer as "ruthlessly ambitious...with a mostly fettered rage." When circumstances allowed his pent-up emotions to become unrestrained, "Spinner" would become a relentless fighter. O'Malley would later pen Spencer's notorious life story in his biography "Gross Misconduct."

The former Swift Current Bronco was selected by the Toronto Maple Leafs 55th overall in the 1969 amateur draft. Not known for their fisticuffs in the early expansion years of the NHL, the pushover Leafs were seeking pugilistic talents for their team. The were attracted by young Spencer's aptitude for an aggressive, fast and rough style of play. His taut muscles and chiseled physique stood out in a time when physical fitness was not a hallmark of professional hockey players. 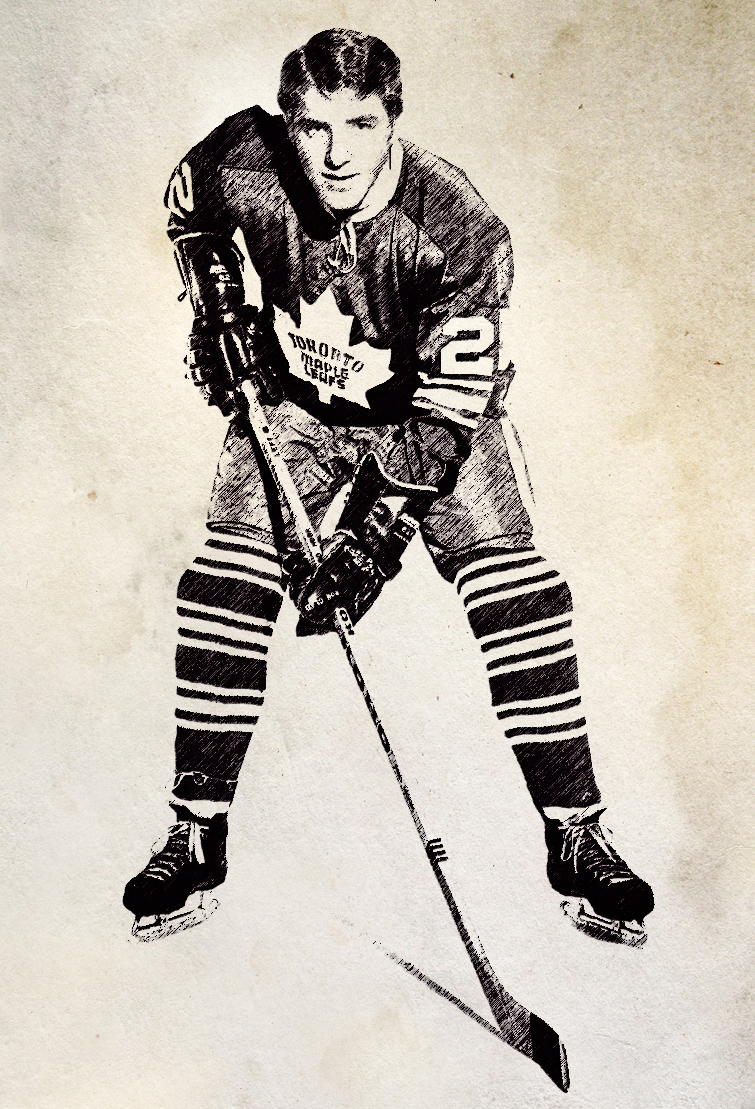 Tragically, Spencer's fledgling career with the Leafs was marred by the death of his father, on December 12, 1970. In his hometown of Fort St. James, B.C., Roy Spencer had been anxiously awaiting his son's first televised game. Brian had just been called up from the Tulsa Oilers, the Leafs developmental team. The game was against Chicago, on a Saturday night, and was expected to be telecast from coast-to-coast on CBC. Brian even had a first period interview lined up with Ward Cornell, the now-deceased host of Hockey Night In Canada.

That night, a network decision was made to instead broadcast a Vancouver Canucks game in British Columbia. Unable to watch his son play, Roy drove to a CBC affiliate in nearby Prince George, drunk on muscatel and deranged with anger. He was armed with three hunting knives, a .303 rifle and a 9-mm Belgium automatic pistol. Roy took eight station employees hostage, ordering the Canucks game off the air. One hostage managed to escape and call the RCMP, who confronted Roy as he sought to leave. The elder Spencer fired two shots from his gun, and was in turn fired upon by the police. Three bullets hit Roy, one puncturing his lung. At the same time that Brian was being interviewed on CBC, his father fell dead. 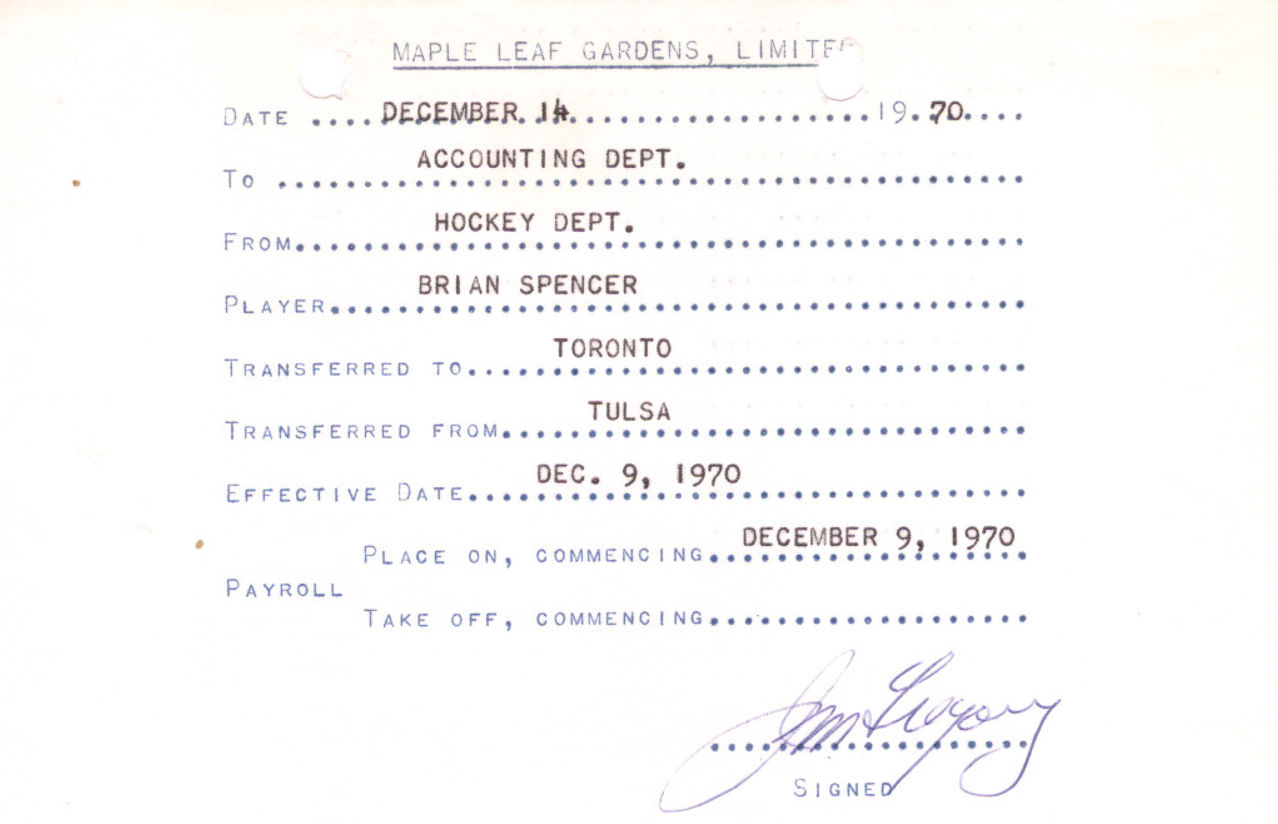 Paperwork for Brian Spencer's call-up to the Leafs. Signed by GM Jim Gregory.

Following his 10-year career in pro hockey, Spencer moved to Palm Beach County in Florida, and worked as a mechanic. He had by now been twice divorced, and made far less money than he did during his playing days. This led to a period of destitution, in which "Gross Misconduct" writer O'Malley describes him as a "vagabond...(who) stayed with friends, hung out at bars, washed himself in swamp ponds, relieved himself at gas-station toilets, living in trailers and motels."

During this period, he shared a trailer with a "friend with benefits" prostitute by the name of Diane Delena, aka "Crystal" of Fantacee Island Escorts. After a bad night with a stoned customer named Michael James Dalfo, "Crystal" sought protection, and found Brian at a local bar. In the early morning hours of February 4th, 1982, Delena claims she drove with Spencer to Dalfo's apartment. At noon, Dalfo was found by a passing truck driver, barely breathing and circled by vultures. He had bullet wounds visible on his face. An article by the Palm Beach Sun Sentinel states he died in hospital four hours later.

Five years after the killing, police offered limited immunity from prosecution to the now-former prostitute in exchange for testimony. She implicated Spencer in the crime. In January, 1987, he was arrested by Florida police and charged with kidnapping and murder. If convicted, he faced the death penalty.

During the trial, major fallacies were exposed in Delena's recollection of the night Dalfo was shot. No evidence existed that placed Spencer at the scene of the murder. At 3:29 in the afternoon, on October 16, 1987, a juror stood up in a West Palm Beach courtroom and said Spencer was innocent of first-degree murder. "Spinner" walked.

The Buffalo News later questioned Maple Leaf great Darryl Sittler on whether he believed Spencer was capable of murder. Sittler said: "Did I see where he had this split personality? Yeah. Could he have done it? Sure, he could've. But he was acquitted."

On June 2, 1988, Brian Spencer drove with a friend, Gregory Scott Cook, to a seedy part of Riviera Beach. Police claimed they had purchased crack cocaine. After parking their vehicle, they were approached by two men, who demanded money from the former hockey star. Spencer refused, and was shot. The bullet pierced his heart.

Shortly before midnight, "Spinner" was dead. His Leaf captain, Dave Keon, was asked by authorities to identify his remains.

According to the Orlando Sentinel, Leon "Lump" Daniels, 35, was sentenced to 18 years in prison for the crime. He pleaded guilty to second-degree murder, attempted robbery and robbery charges. Larry Willie Johnson, 35, was sentenced to 40 years in prison on the murder charge. He also received a 15-year concurrent sentence after pleading guilty to related charges of attempted armed robbery, armed robbery with a firearm and possession of a firearm by a convicted felon.

September 3rd is Brian's birthday. He would have been 66. 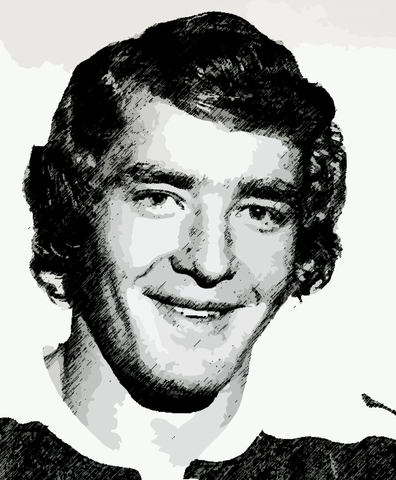