Are you about to pay for NHL GameCentre LIVE without knowing what you can watch?

Share All sharing options for: Are you about to pay for NHL GameCentre LIVE without knowing what you can watch?

Did you subscribe to Rogers NHL GameCentre LIVE last season? Were you aware that your account billing defaulted to auto-renew your subscription every October 1? FYI: That's less than 24 hours from now. 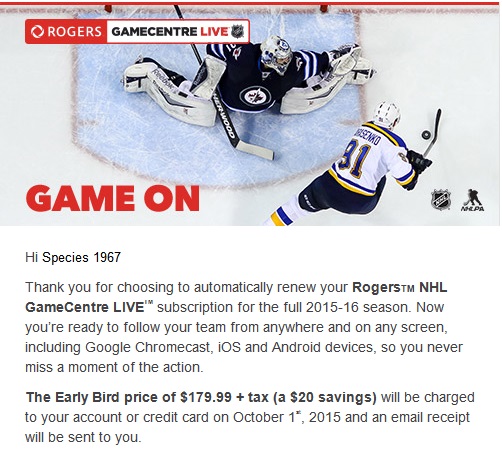 GameCentre LIVE has some well documented flaws: the broadcast is delayed, often more than 2 minutes; the apps have inconsistent features that are often not user friendly; and there is a lot of missing content a rational person would expect to be included like the All-Star Game and Skills Competition, NHL Draft coverage, and pre-season games.

All that being said, last season a Leafs fan in the GTA could watch in HD well over two thirds of the team's games, almost live; plus almost all other NHL games, and all of the Stanley Cup Playoff games; for only about $180. That's not a bad deal. It's especially good if you are one of the increasing numbers who do not bother with a cable subscription.

The only Leafs games blacked out in the GTA during the 2014-15 season were the 24 games broadcast by TSN through their regional rights.

What about this season? Will it be the same blackout rules?

Coming soon... but tomorrow they will charge your credit card anyway.

Last season GCL subscribers in Toronto could watch any Leafs game broadcast on Rogers Sportsnet, whether it was a national broadcast or not. What about this year? Sportsnet has published it will have 40 'national' Leafs games, and 16 'regional' Leafs games. Will the regional games be blackout this season? The website is ambiguous:

What is "TV Authentication"?

"TV Authentication" means that if a GCL subscriber is trying to watch an in-market game that would normally be blacked out they must also have the corresponding TV channel for that game within their cable TV package, which must also be through a "participating provider".

This implies that games broadcast on Sportsnet, but not nationally (Saturday games are usually national broadcasts) will not be available on GCL unless you go through the TV Authentication process to prove you have a cable subscription with a "participating provider".

Who are the "participating providers"?

With less than 24 hours until Rogers bills our credit cards for the 2015-16 subscription renewal they still can not even explain the logistics of their own product!

As a last resort, I contacted Rogers through the infamous "Live Chat" feature. Perhaps someone there would have this important information?

The live chat operator wasn't even exactly sure what GameCentre Live was, and asked me for the link to the website explaining the "participating provider" rules. Then he simply repeated the same non-information I had already found there, and finally suggested I call my own cable provider (Cogeco) and ask them if they knew if they were a "participating provider".

I asked him if this information would be published before I pay for the service on October 1 and the predictable response was "That information is coming soon."

NB: We are well aware of the existence of proxy services, and other means of circumventing blackouts. SB Nation does not endorse their use and comments linking to streaming sites will be deleted.