It's time to check in on another 2015 Leafs draft pick! My post on Mitch Marner starts with a bit of an introduction to my goals for these posts, as well as an explanation of my qualifications (spoiler alert: I don't have any). If you haven't already done so, give that article a read (if you are really opposed to reading about Mitch Marner for some reason, just read the first four paragraphs) and then head back here.

Today we'll be looking at Jeremy Bracco, the Right Winger who the Leafs selected with the 61st overall pick, which they received with pick 29 in exchange for pick 24 (which was used to select Travis Konecny).

Bracco started the season playing for Boston University, but after putting up 3 assists in 5 games there he opted to drop out and play for the Kitchener Rangers in the OHL instead. This prompted much debate and handwringing in the media and fan community for a couple of days, at which point people found something else to get worked up about.

Like previously-covered prospects Mitch Marner and Travis Dermott, Bracco plays in the OHL's ridiculous Midwest Division, where his team's 30-7-4 record is good for third place. Despite missing the first 12 games of the season because of his late arrival, he's currently third in scoring on his (very good) team.

So Bracco is a pretty good OHL player, but does he have a shot at being a good NHL player? And can he make me feel better about not having Konecny in the system? Let's see if we can't find out.

Note: Stats do not include the games played yesterday (Jan. 22)

We'll start with essentially the same exercise I used to start my post on Mitch Marner: compiling draft+1 season from the previous six OHL seasons (2009-10 through 2014-15) with similar scoring rates to Bracco's rate so far. Unlike Marner, Bracco isn't putting up one of the best scoring rates in the past 20 years, so instead of listing the 15 best seasons, we'll be seeing where Bracco fits in with the next 15 best. And some familiar names might just stop by to wish him luck:

Stats in this section are from eliteprospects.com

Well if it isn't our old friend Mr. McKegg, with a leg for an arm and an arm for a leg!

Along with former Leafs prospect Greg McKegg, this list includes current Leaf Peter Holland and current Marlie Jeremy Morin. In addition to their near-identical scoring pace (Bracco is ahead of Morin by 0.002 P/GP, which is a purely academic distinction), Morin and Bracco have a similar career path: both spent their draft year with the US National U18 Team, were drafted in the second round, then went to Kitchener for their draft+1 season. This is perhaps not the most encouraging comparison, as Morin is now 24 years old and hasn't been able to stick in the NHL, despite having NHL-ready size at 6'1" and 190 lbs.

Which brings us to the tiny elephant in the room: Jeremy Bracco is pretty small as far as hockey players go, standing only 5'9". That's slightly shorter than me, which is a bit worrying. I once met Drew Doughty and I'm pretty confident he could have crushed me into a basketball and thrown me around like the Monstars do to Michael Jordan in Space Jam if he wanted to. 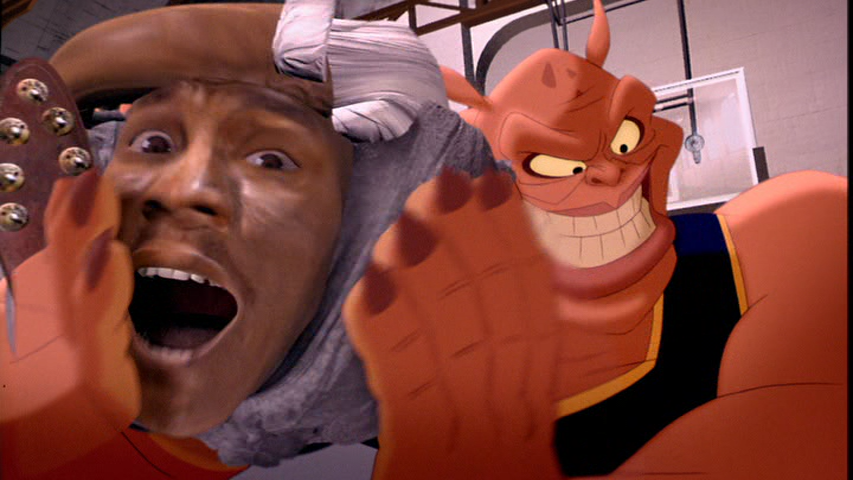 there but for the grace of God go I

Fortunately, being 5'9" is not an insurmountable obstacle. According to NHL.com there are currently 14 players with at least 10 points this season who are shorter than 5'10. And some of those guys are pretty darn good! Here's how Bracco fits in with some of their draft+1 seasons. I also threw in Mark Arcobello since we're a bit more familiar with him. Unfortunately the players weren't considerate enough to all play in the OHL, so I'm using NHLe to attempt to normalize the scoring rates between leagues. This is a far-from-perfect method of comparison, so please take these results with a generous helping of salt:

We shouldn't use this data to say that Bracco is having a better draft+1 season than Johnny Gaudreau did, but it does seem reasonable to conclude that Bracco's scoring rate is roughly in line with where it should be for him to make an impact in the NHL despite his size.

Jeremy Bracco vs The Present!

You may recall from the Mitch Marner post that Bracco is doing quite well compared to his peers this season. There have been a few games since I wrote that article, though, so let's see the most recent stats:

All stats in this section are from prospect-stats.com

Bracco still sits fourth in his draft class for P/GP. His shooting percentage is high at 17.56%, but that's just the ninth-highest in the OHL, and should be reasonably sustainable. He averages just 2.55 shots per game, which is the 23rd-highest rate among forwards in his draft class. Bracco is touted more as a playmaker than a goal scorer, though, so I don't find his lack of shot production terribly concerning.

Bracco is still fourth, but the gap between him and Konecny is small enough that 1 extra primary point for Bracco would move him into third.

Now for even strength primary points:

Bracco jumps to second-place for even strength scoring, although he's effectively tied with Konecny. If you're wondering why Marner has dropped down to fifth (he was fourth in this metric in the post on him), it's because Mitchell Stephens has just made the "minimum 15 games" cutoff. Stephens still has significantly fewer games played than the other players on this list, so it'll be interesting to see if he can keep up this pace.

Kitchener has had the fewest power play opportunities in the OHL so far this season, though, so perhaps Bracco's even strength numbers have been inflated by a surfeit of even strength ice time? Let's check out estimated even strength points per 60 minutes:

Bracco actually does even better by this measure, although Mitchell Stephens is ahead by a fair margin. If we were only including players with at least 16 games played, though, the Leafs would have the best and second-best players for ES Prim. P/60 in the 2015 draft class. Stupid Mitchell Stephens.

Jeremy Bracco vs The Future!

If Bracco can keep this pace up then he'll make me feel a lot better about not having drafted Travis Konecny. Right now it's looking like trading Konecny for Bracco would not be as lopsided a trade as their draft positions would make it seem; add in Dermott and Dzierkals and the Leafs come out looking pretty good.

And he should be able to keep up this scoring pace. So far he's improved his scoring rate every month, with 1.08 P/GP in November, 1.63 P/GP in December, and 1.75 P/GP so far in January. Even if he can't maintain the January pace, it's not unreasonable to expect Bracco to finish the season with a 1.5 P/GP scoring rate or better.

So what next? Bracco isn't dominating the league the way Marner is, but he's doing well enough to raise the question of how much good it would do him to spend another year in the OHL. Luckily, because he wasn't playing in the CHL when he was drafted, Bracco is eligible to play in the AHL or ECHL next season (thanks to WizardOfNaz for pointing that out in another comments section and preventing me from embarrassing myself here). It would be nice to get him into the Leafs' system, and playing in a pro league could make it easier to assess how much of a problem his weaknesses (size, skating) pose against better opponents.

Unfortunately, having Bracco play in a pro league would (to the best of my knowledge; let me know if I'm wrong) start burning years on his entry-level contract. If Leafs management thinks Bracco is still several years away from cracking the NHL roster, they may choose to keep him in the OHL for another season to maximize the value of his ELC.

Ultimately, Bracco looks like he has a pretty good chance of contributing in the NHL. We won't know for sure until he starts playing against stronger competition, but so far it looks like he was quite the steal at 61st overall.

Next time on Checking In With The Kids: Our first non-OHL prospect, Defenceman Andrew Nielsen of the WHL's Lethbridge Hurricanes!