It's time to check in on another 2015 Leafs draft pick! My post on Mitch Marner starts with a bit of an introduction to my goals for these posts, as well as an explanation of my qualifications (spoiler alert: I don't have any). If you haven't already done so, give that article a read (if you are really opposed to reading about Mitch Marner for some reason, just read the first four paragraphs) and then head back here.

For the ninth and final installment of Checking In On The Kids we'll be looking at the Leafs' 7th-round pick, Nikita Korostelev of the Sarnia Sting. Korostelev's availability in the 7th round of the draft came as a bit of a surprise, as he was ranked much higher on many pre-draft rankings. Scott Wheeler had him ranked 34th in his final rankings, and Central Scouting had him at #50 on their list of North American skaters (for comparison, they had Travis Dermott at 46, Andrew Nielsen at 52, Jeremy Bracco at 60, and Dmytro Timashov all the way down at 92).

NHL teams evidently had some reservations about Korostelev, but his offensive skillset had many Leafs fans thinking he could be one of the best steals of the draft. Unfortunately his draft+1 season has not been going terribly well, as his scoring rate has dropped noticeably from last season. So were NHL teams smart to pass on him at the draft, or might they all look foolish in a few years for passing on him? Let's find out!

Note: Stats include games played on Feb. 16 but not Feb. 17. Korostelev did play on Feb. 17, and recorded no points.

Let's get this out of the way up front: Korostelev is scoring at a rate of 0.74 points per game so far this season, which isn't very good for an offence-first forward in his draft+1 season. You may recall that Stephen Desrocher is scoring at a rate of 0.63 P/GP this season, and he's a defensive defenceman. Also of note, Frederik Gauthier scored at a rate of 0.96 P/GP in his draft+1 season in the QMJHL. Sure, it may be a bit easier to score in the Q than it is in the OHL, but Gauthier still outscored Korostelev's current pace despite being a defence-first centre who is not seen as having much in the way of offensive upside.

Who are our historical comparables? Well, over the previous six seasons (2009-10 through 2014-15) 33 draft+1 forwards scored at a rate from 0.7 to 0.8 P/GP. 16 of those players were undrafted, so I'm going to leave them out of this list to keep it from getting too long. So here are the 17 drafted players in the 0.7-0.8 P/GP range, plus two players who just missed the cutoff but who may be a bit more familiar to Leafs fans:

Stats in this table are from eliteprospects.com

This is a motley assortment of players, and remember that 16 other players scored in the same range but were never selected in the NHL draft. Some of these guys still have NHL potential, and there are some surprisingly high draft picks, but so far the most successful guy on that list is Richard Pánik, who has 43 points in 165 NHL games.

There's another comparable I'd like to look at in a bit more detail: 2014-15 Nikita Korostelev. Korostelev's scoring rate is down by about 0.25 P/GP compared to last season, which is not what we want to see. But maybe he had a similarly slow start last season and really turned it on toward the end? Or maybe he just had a stretch of good luck last season which he hasn't been able to replicate this year? I've prepared some graphs to compare this season with the previous one, so let's see what they say! 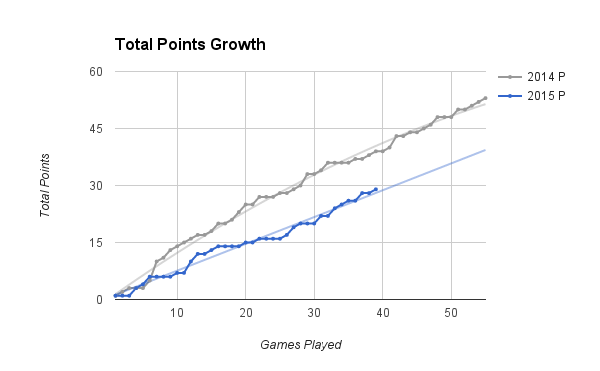 Stats in these graphs are from ontariohockeyleague.com

Korostelev did have a stronger start last season, but he also generally kept up a better pace throughout the season. He'll need to really pick up the pace if he wants to catch his point total from last season. Now let's see how his P/GP rate has changed throughout each season: 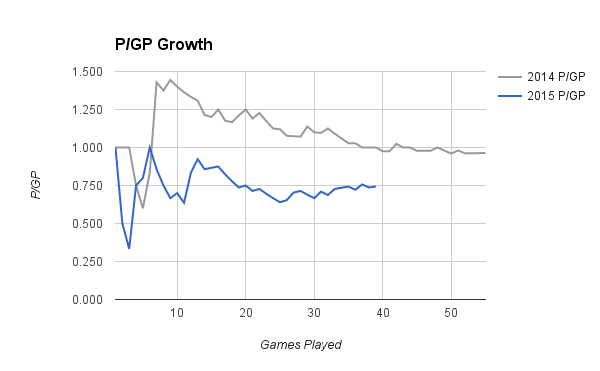 Last season, Korostelev started strong and then saw his production rate decrease a bit, but he still stayed around 1 P/GP. His lowered scoring rate seems to coincide with the injury he suffered in game 34, which caused him to miss 12 games before playing his 35th. His scoring rate had started to decrease before that game, though, so it's difficult to say how much of an impact the injury had. This season he was injured in his 36th game and missed 15 games before recently returning, so we'll see what sort of effect that might have.

Let's break down his scoring rates into goals and assists. First let's see how his goal scoring this season compares to last season: 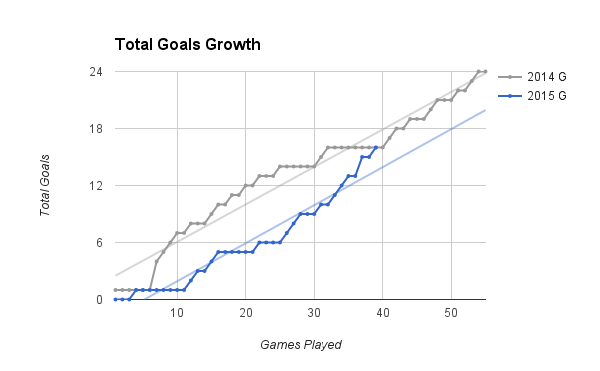 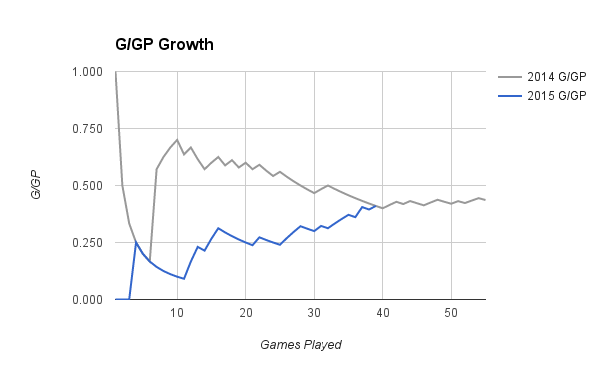 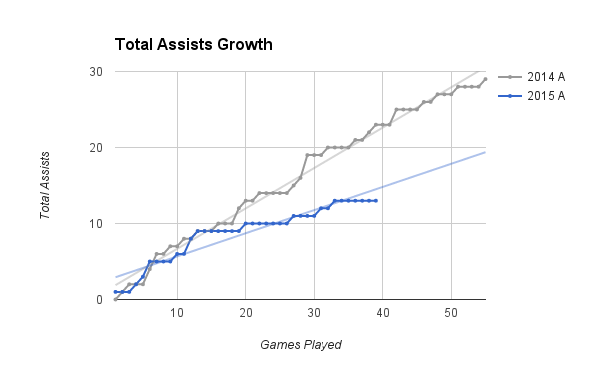 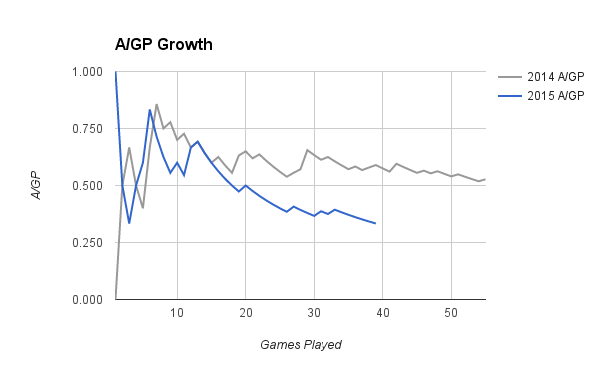 Yikes. Korostelev's assist rate started strong this season, but then his A/GP rate turned into what looks like a pretty rad snowboarding hill. Normally I'm in favour of rad snowboarding hills, but in this case it is not a good thing at all. He has recorded a whopping 4 assists in his past 26 games, which is just plain bad. Korostelev was never advertised as a playmaker, but he was able to record assists at a respectable pace last season so something is apparently off this year.

The main skill for which Korostelev is known is his shot, so it's probably better to see his assist rate down compared to last season than it would be to see his goal rate down that much. His value to the Leafs is as a goal scorer, so the most important thing is that he keeps scoring lots of goals. It would obviously be preferable to see him scoring more goals than he did last season, but his regression may not be as bad as his P/GP rate seems to indicate.


Nikita Korostelev vs The Present!

Korostelev's P/GP pace this season is the 24th-highest among draft+1 forwards in the OHL this season. He drops to 27th if we include defencemen, but we're not going to do that because defencemen aren't really comparable. Here's how Korostelev fits in with the 15th-30th best P/GP rates among his draft class:

Stats in this section are from prospect-stats.com

Of those players, the only ones who were selected in the NHL draft are Korostelev, Jeremiah Addison (Round 7, 207th overall), and Roy Radke (Round 6, 164th overall). That isn't the most inspiring group of peers, but Korostelev only has 5 secondary assists so perhaps he'll do better in primary points?

With apologies for the lengthy table, here's the top 25 draft+1 forwards for Prim. P/GP:

He comes in at 21, which is a small improvement, but is still well behind the "really good" prospects (I'd say Senyshyn is probably the cutoff there).

Now let's see where he fits in with the top 20 players for even strength scoring, sorted by ES Prim. P/GP:

Of course, we already knew that Korostelev's assist numbers are awful this season, so it isn't too surprising that he's had such a poor showing in comparisons that include assists. If he is purely a goal scorer, maybe it's more fair to just compare his goal stats. First let's look at all-situations goal-scoring:

Korostelev has the 15th-best G/GP rate in his draft class. Several other players have very similar G/GP rates, so Korostelev could easily move up or down a few spots.

Korostelev has the 18th-best ES eG/60, and also the 18th-best ES G/GP. A jump into the top-15 seems possible if he can continue to improve on his scoring rate, but top-10 is probably out of reach.

Finally, let's see how his powerplay goal-scoring rate stacks up:

If Korostelev is a one-dimensional goal scorer, we should expect to see him put up lots of goals on the power play. He kind of does, but only at the 9th-best rate in his draft class.

Korostelev's lack of defensive ability seems to have played a large role in his slide down the draft rankings. If he isn't producing a lot of offence, how is he affecting his team's goal differential? Let's take a look at this GF% numbers, along with 19 other players in the same range for GF%Rel:

So it doesn't look like Korostelev was a Timashov-esque steal. It's hard to be too upset about a 7th-round pick not panning out, though, and it's still too early to write him off completely. And if he can go on a goal-scoring tear to finish the season the outlook will be a bit better.

Nikita Korostelev vs The Future!

Korostelev was born in 1997 so he will not be eligible to play in the AHL or ECHL next season. Even if he were eligible, I doubt Leafs management would be in a hurry to have him join one of the pro teams. Another year in the OHL looks very likely, and is probably the best option for his development.

Hopefully this season will prove to be an anomaly and Korostelev will spend his draft+2 season wrecking shit. He came to Canada as a 14-year-old for the sake of his hockey career, so he clearly has NHL aspirations. Unfortunately his current pace isn't likely to get him there. A strong 2016-17 season could earn him a contract with the Leafs, but if 2015-16 is an accurate reflection of his abilities I would not be surprised to see him return to Russia.

And so concludes my look at the Leafs' 2015 draft picks! I hope you've found these posts entertaining and/or informative. I may revisit the subject in some capacity in the offseason, so let me know if there's anything in particular you'd like me to touch on.