It's no secret that the Maple Leafs current blue line corps is far from spectacular. It's also far from being set in stone for the next few years with only Morgan Reilly and Jake Gardiner being safe bets to remain long term. Looking at those two points alone, you would think that if you were a defenseman within the Leafs organization that you may have a chance to crack that line-up eventually.

And what if you were a defenseman who was in the top 5 scoring of your entire respective league, well surely there wouldn't be much stopping you from landing an NHL job at some point right?

Well as T.J. Brennan is learning the hard way, it's not that simple. He finds himself unable to make a lean Leafs blue line, despite putting up point per game numbers in the AHL and doing so for the last FOUR seasons. He has good size, respectable skating, and a booming shot from the point, so why has Brennan not had an extended run as an NHL defenseman? I'm going to look at the three most common answers I've come across for this question in the last few years, and dig a little deeper to see how much merit there is to each of them.

Here's probably the simplest answer I've seen. Brennan may be good in the AHL, but he just doesn't have what it takes to make it the NHL. Has he ever truly been given a large enough opportunity to determine if this is true though?

Of course, Brennan has had some playing time in the NHL, albeit quite limited. Let's take a quick look at Brennan's entire playing career across all leagues since 2007, the year he was drafted 31st overall by the Sabres from the QMJHL. 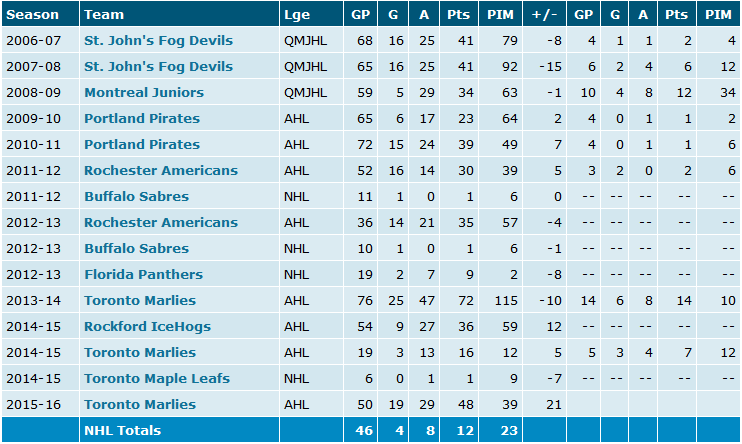 Brennan has had four separate stints in the NHL, with only one being longer than 11 games. That would be where he played 19 games for the Florida Panthers in the 12-13 season, where he managed to score 9 pts. That's nearly a 0.50 PPG as a 23 year old. I think it would be hard to argue that that's not NHL caliber production, especially as a bottom pairing defenseman.

In his other 3 stints he played 11, 10, and 6 games respectively. The latter being his only playing time with the Leafs which took place last year. He managed to score 1 point in each of those appearances giving him a total of 4 goals and 8 assists in 46 NHL games, or close to 0.25 PPG in total. Not amazing, but nowhere near dismal either. The longest stint Brennan had was when he was the most successful, providing evidence that perhaps he wasn't given enough of a chance in his other three stints. In the next section, we'll look at even more evidence that supports this in T.J.s HERO chart.

Probably the most common reason I hear for why Brennan seems bound to be an AHL lifer. But how much truth is there to this argument?

Brennan himself was actually asked about this here. His response:

"I try every time I look at the NHL, I try to [remember] that just because you're not there, doesn't mean you're not doing things right," Brennan said. The biggest lesson that I've learned is really controlling what I can. I think things happen for a reason"

So that was pretty vague, but it seems like Brennan knows what his skill set is and believes that it can help an NHL team.In another quote from March of 2015 in an interview with David Alter, Brennan said:

"In order to get to the next level, it’s about reading the play and reading what each situation is called for. I like to chip into the offensive side of things, but over the past few seasons I’ve really tried to work on my defensive game,"

It's obviously somewhere he knows he needs to improve, and it seems like he's been working hard to try and do so. He wants to help his team however he can, but when he actually has been on an NHL team, how much was he helping?

Since Brennan has such little NHL games played, finding data isn't easy, and finding that data for the AHL can be even more difficult. That's not to say there it isn't available though. Let's take a look at his HERO chart from his biggest sample size, his 19 game stint with the Panthers three years ago. 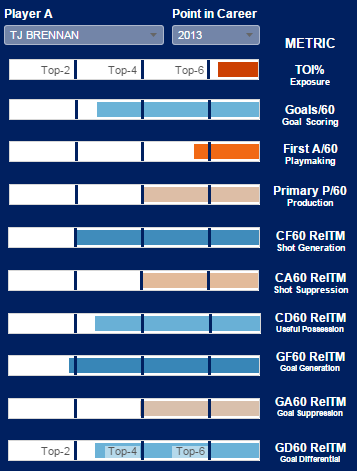 That's actually quite impressive, especially considering his ice time. I thought I'd look and see if there were any comparables to Brennan's 19 game season, and I found one that was pretty close in that of former Leaf Cody Franson this year. 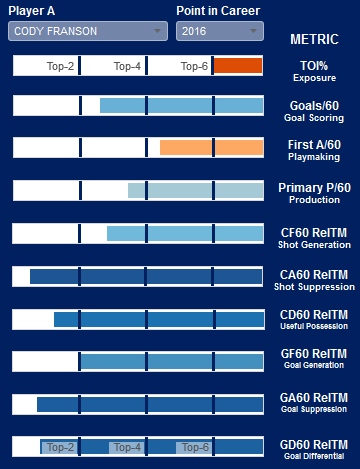 Franson does come off as better, but Brennan is not far from him. They're quite close in all categories besides shot and goal suppression, lending some evidence to the idea that Brennan might not be a defensive stalwart. However, you would never see Franson anywhere near the AHL. If you want to look at Brennan as a poor man's Cody Franson, I think one could argue that should still be good enough to make an NHL team. His possession numbers are decent, and given more ice time and more games played, it'd be interesting to see what he could do.

If nothing else, it's hard to argue that he's not a better option than maybe other bottom pairing defenseman. 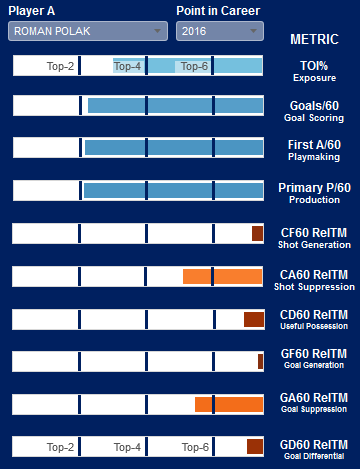 So is T.J. Brennan bad defensively? There's not a ton of evidence one way or another, and therefore average might be the best way to describe that part of his play. Is he great defensively? Probably not, but he's surely better than many other bottom pairing options who wouldn't be able to do much on the PP, unlike Brennan.

Brennan will be turning 27 in a month and a half. He's entering that awkward stage of a hockey players career where they can't really be considered that old, but they also may not have a ton of years left depending on a number of factors. He may be on the back end of his prime, which is fair I suppose, but there's something I find quite puzzling about this argument. He didn't just start scoring at his current rate this season, he's been doing this in the AHL since 2012-2013!

He was only 23 when he scored 35 pts in 36 games for Rochester. Even at 21 he scored at a 0.54 PPG pace over 72 games for Portland. If you put that 21 year old T.J. Brennan season up against the current group of Marlies blueliners, Valiev comes the closest to that pace at 0.38 PPG this season, which is still significantly lower. A handful of those current Marlies are pegged for at least a bottom pairing role in the next couple of years. Something Brennan himself has never been able to do.

Saying he's too old doesn't work for me, because he's been putting up great numbers since he was barely out of his teens. If this wasn't the reason then, then I can't see it being the reason now. What's true about this argument is that it will be harder for him to make a team as he ages, because management will be more interested in seeing what they have in younger prospects. (See Loov, Viktor and Percy, Stuart)

All of those players have experienced extended tenures on an NHL team or still are. Some of them push linesmen down too, but that's besides the point.

What I'm trying to say is that the 'Too Old' argument is a silly one, because Brennan has been putting up respectable numbers long before anyone could use that argument. Other current NHLers were given a chance and stuck with it after putting up similar production, Brennan is unfortunately not one of them.

So has Brennan just been met with bad luck? A never ending array of circumstances that are beyond his control that have kept him from cementing an NHL job, that as he gets older, make it even more difficult to overcome? I personally believe this may very well be a big part of it.

I think Brennan's unique skill set and perhaps mediocre defensive game has made it difficult for him to get an extended stint with an NHL team. The more time that goes on with less NHL experience he has, the more teams are going to be weary of putting him there. Kind of like that whole job hunting trope where you need experience to get a job but need to get a job to get experience.

Someone who comes to mind when I think of Brennan's situation is current Leaf P.A. Parenteau. He also slugged away in the AHL for years, putting up great numbers season after season before finally getting a legitimate shot and never looking back. Now he's a legitimate middle 6 forward and probably the Leafs best trade chip at the moment.

I personally hope Brennan gets a chance with an NHL team, even if it's not the Leafs. I think he's earned it, and I don't think there's enough evidence to suggest he's not good enough.

P.S. This was my first Fanpost and a lot of fun to do! I'm sure it was possible to dig even deeper but I just wanted to give a quick glance at his unique situation. Any suggestions on how I can improve in the future are welcomed!

What should the Leafs do with TJ Brennan?