At first thought, a sizeable increase in shot rate seems like a positive given that more shots will lead to more goals. And it can't be bad that Kadri ranks third this season for shots/60 just behind notable volume shooter Ovechkin for all skaters that have played greater then 500 minutes this season playing 5v5. Let's ignore Dustin Brown on the list.

The next ranked leaf after Kadri is JVR, a common linemate of Kadri, ranked at number 34 with 9.4 shots/60 whose is a tiny 1% below his career average shot rate. JVR's variability in shot rates is what we expect for NHL players as Eric T has shown that shot rates but not SH% tend to be repeatable. And what we see with JVR is his shot rates remain consistent even with a new coach (and even in line with his time with the flyers).

Eric T has shown here and here that shot rates are both more useful then SH% in terms of predicting point and goal production for he next season. And also that we expect shot rates to "regress" to career average and much more quickly then SH% (more repeatable/reliable).

You can self check the self reliability by looking at the entire leaf roster (and you will find no leaf has the same variation in Shot rate that Kadri has over their career). I'd bet that Kadri's S/60 (shot rate) will fall back to his career average next season. 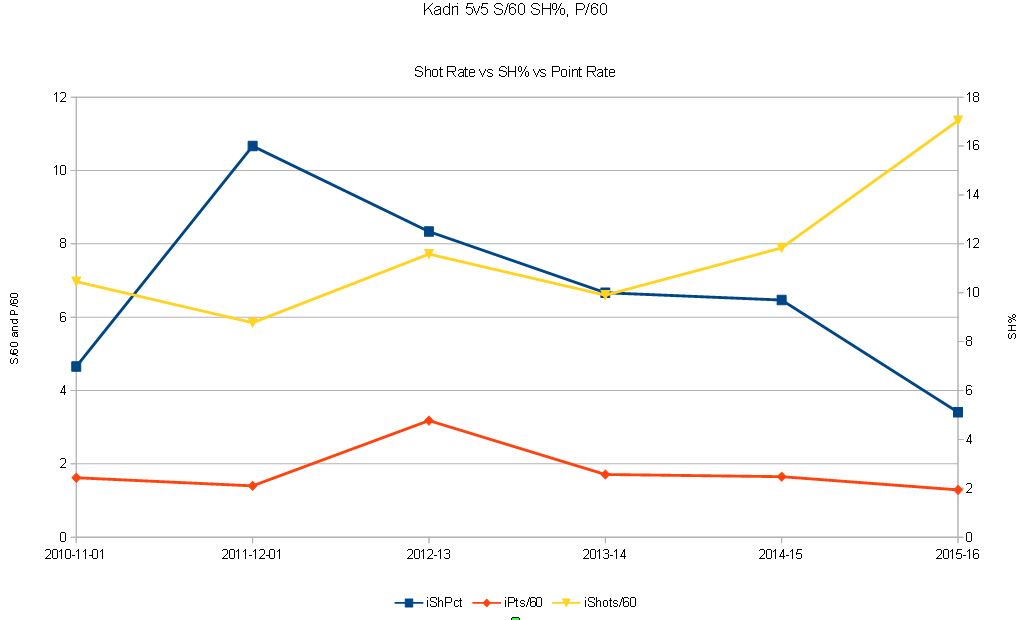 He shoots more, but what about high quality scoring chances?

Kadri's large 47% rise in shot rate suggests that something beyond random variation is leading to the increase. If this rise is not some extreme random variation, then perhaps the coaching staff is instructing him to shoot more (on par with league leaders like Ovechkin of the league).

Or perhaps Kadri finds himself forced to shoot because his teammates are not open to receive a pass (i.e. he needs better teammates). That said, a change in his shot rate may not be a negative unless this does not lead to similar 47% rise in the high danger scoring shot rate.

Below is a chart of Kadri's 5v5 shot rate vs high scoring shot rate. (To be complete, if we plot shot rate vs general scoring chances rate we do see an increase in scoring chances as expected). However this correlation and rise does not extend to these high danger scoring chances which suggests that Kadri is perhaps taking too many low danger and easy to save shots.

(Strictly speaking, the reader could argue that the work around high danger scoring chances is of too small a sample size and incomplete and so dismiss this analysis. Feel free to). 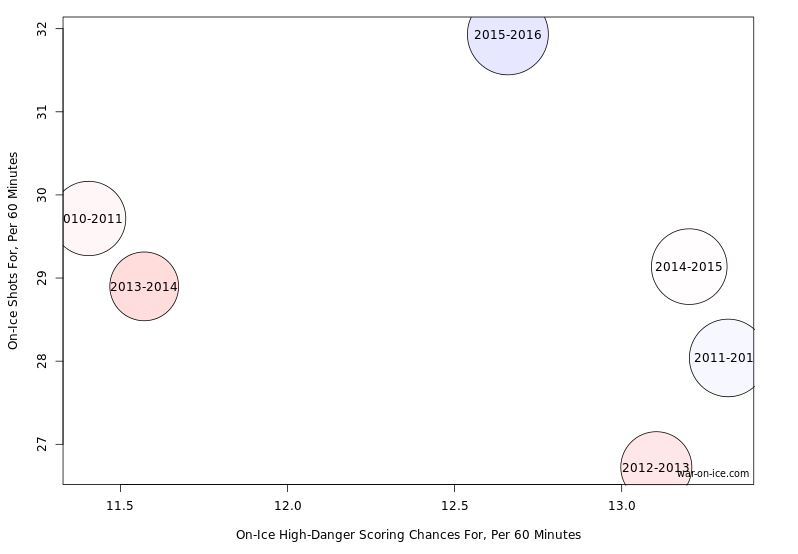 What do shot rates suggest about Points and Goals?

That could be co-incidence, though if the lack of high danger scoring chances are the source of the drop in his offence, then we would expect Kadri to currently have 12 goals to date or 15 goals pro-rated for the season. (Using this shot rate, I'd expect Kadri's 5v5 points to be 36 pro-rated this season). If however, we believe that kadri's 47% elevated shot rates is sustainable then you might expect him to generate 47% more goals (22 total for this season).

So Does Kadri Shoot much? Watch me sit on the fence.

Well Kadri is shooting more then his career average and at rate that is in line with the league's best players. If he is shooting too much, this would suggests he not far off his goal totals and it could also explain the reason for the drop in his play making assists and points.

That is, the scoring chances he is creating are not the high danger types so we should not expect his goal total to rise that sharply. And perhaps with more of playmaking and "pass first mentality" in place of low quality shots, Kadri will be better able to improve his assist and points total.

Then again, there is the possibility, that Kadri has happened on something rare that has enabled him to improve his shot rates. And now what he needs to do is convert those volume heavy shot rate by improving his "shot" this summer. And with more random luck going his way and better teammates who are able to actually get open, receive his pass and finish then things can be more positive. That's a bit too optimistic for me. 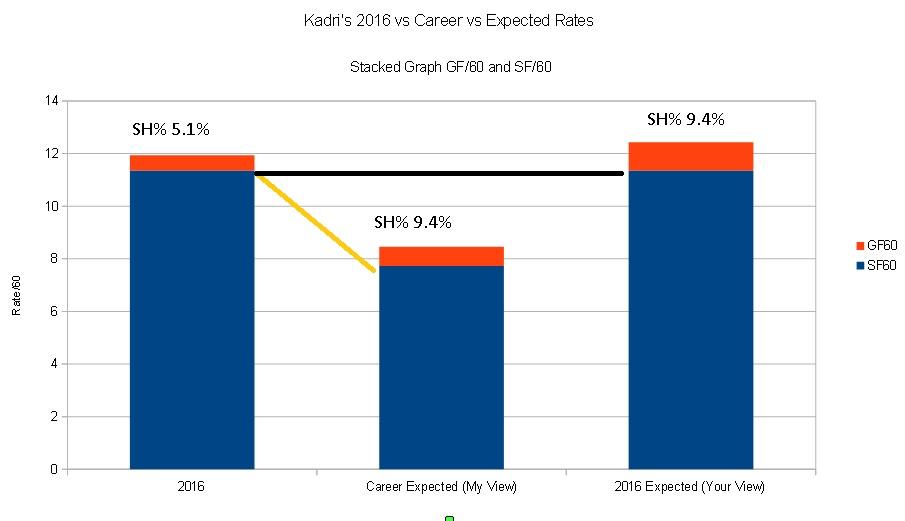