The premise behind P/60 is that players shouldn't be penalized for variables they cannot control (TOI). A scoring metric which controls for TOI allows us to compare players with varying levels of icetime. In this piece, I'll be looking to examine the impacts of even strength time-on-ice (TOI) on even strength points per 60 minutes (P/60).

The argument against P/60, in this case, is that TOI actually affects P/60 and that just because a player achieves a certain P/60 in limited minutes, does not mean that player will achieve the same P/60 in increased minutes.

Using this set of data, I tested the relationship between P/60 and TOI in a few ways.

Despite these non-relationships, it's still possible that TOI has a marginal impact on P/60. My next test was to separate delta TOI (changes in TOI from year 1/2, 2/3) into quadrants. The lil guy who runs the symmetry program in my brain was very pleased to know that I had 216 players in my sample, and therefore 54 players per quadrant.

The data for 14/15 and 15/16 was a little weird - everybody lost P/60. Perhaps scoring was down leaguewide, or just with this sample of players. Either way, the relationship still hasn't reared its head. The guys who gained and lost the most TOI both lost the most amount of P/60. The guys whose icetime was relatively stable saw more stable P/60s. 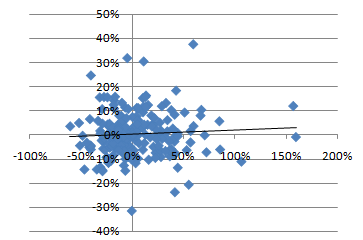 The Y axis is changes in TOI from year 1/2 as a percentage, the X is the same but P/60. The spikes in P/60 output from certain players are a topic I'll touch on later. As the line of best fit indicates - the relationship between TOI and P/60 continues to elude statistical analysis.

We'll now be taking an intermission. Please peruse these puppy and kitty gifs while relaxing to some dope Chopin tunes. Help yourselves to the alcohol and possessions of whoever's house this is.

Welcome back! I hope you found the gifs as soul-affirming as I did. I also hope everyone was able to drink in moderation, as we will be escorting any obnoxious drunks off the premises of whoever's house this is.

I think both sides of this debate can offer some individual cases in support of their arguments, so I figured I'd include a few.

First up for the defense is Mr. James van Riemsdyk. JVR was traded to the Leafs in the summer of 2012. By virtue of the trade, he saw his TOI/GP increase by about 30%. Given that in my entire sample of data, only three players saw bigger increase of TOI from year to year, I would consider this a very significant change. However, despite getting significantly more icetime, his P/60 was relatively stable, increasing by only 10%.

This leads me to a difficulty in my methods: it's very difficult to isolate growth/shrinkage in point producing true talent as a product of age. The 10% increase could easily have been growth. Tom Wilson, Blake Comeau, Matt Belesky, Benoit Pouliot, Vlad Tarasenko, Alex Galchenyuk, Trevor Lewis, Kris Versteeg, Torrey Mitchell, and Dominic Moore were all guys who saw at least a 10% increase in TOI and at least a 10% increase in scoring. Different levels of ability, different levels of icetime, different locations on the aging curve, but all were able to maintain scoring despite getting more TOI.

On the other side of the coin are guys who gained icetime and lost production. With the same 10%/10% requirements, we get a list of Kyle Chipchura, Michael Raffl, Carl Soderberg, Patrick Maroon, Kyle Palmieri, Matthew Perrault, Riley Nash, Tomas Tatar, Nail Yakupov, Andrew Desjardins, Artem Anisimov, Matt Belesky, Nikita Kucherov, Tyler Toffoli, Mark Letestu, Troy Brouwer, Brad Richardson, and Shawn Horcoff. If you're aware of a good case study, let me know in the comments, I'm sure they exist.

What's particularly absurd about this is that if I flip the scrip and look for guys who gained/lost TOI and gained/lost P/60, I can come up with a list just as long as the two above. Why is there no order in this world, you ask? For the same reason we saw those huge P/60 spikes in the scatter chart: we're dealing with small-ish sample goal-based metrics. Every year one or two teams drastically outperform their shot differentials.

Those teams are constituted of players who are drastically outperforming their historical shooting percentages, because an 82 game sample allows this. It's difficult to do it over an entire career, but over a single season, players can explode in scoring. Given that P/60 is a descriptive metric, it follows that we should expect that volatility to show up in the data.

For this reason, we see guys at every end of the spectrum with every possible outcome for TOI and P/60. Guys gain TOI and lose or gain scoring. Guys lose TOI but lose and gain scoring. Seeing this data suggests to me that single-season P/60 should be taken with a grain of salt, and should be considered a record of what happened, not necessarily what is going to happen.

However, given that shooting percentages seem to normalize over a few seasons of data, this conclusion does not implicate P/60 over large samples as a good estimation of what will happen. We should be cautious to use Jason Zucker's formerly 2.0 P/60 as an estimation of his true talent, and much more willing to take JVR's 2.0 as gospel (aging curves permitting, of course).

The other major conclusion we can draw from all this data is that there is no relationship between TOI and P/60. If we could control for unexpected--and undeserved--spikes in SH%, perhaps we'd find that QoC, QoT or ZS% have an impact on P/60.

A few notes before I let you go:

1. HA has given me problems with data in the past. I used the site in this case, but I'm not totally confident that individual numbers are correct. I am confident that the macro data is fine, though.

2. In today's FTB, Katya mentioned a much more legitimate criticism of P/60: it includes secondary points. Secondary points are not nearly as repeatable as primary points, and therefore inject noise into the data sample. If I were to repeat this experiment with primP/60 instead of P/60, I'd expect to find even less of a relationship with TOI.

3. Another criticism I've seen of P/60 is that it's used as a catch-all. I dunno who's using it as a catch-all, but that's on them, not on P/60. P/60 is not a catch-all of absolutely anything other than points/time. Like any stat, if P/60 is used improperly, it becomes less meaningful. Comparing three-year scoring samples of two players to determine who is the better scoring would be an applicable... application.

A big thanks to Charlotte's Webster for helping me think through some of the methods here.

I ran a regression using my dataset. I've been taught several times to read these bloody things but it's still a mystery to me. If you understand any of this, I'll surrender the laser pointer to you and go back to begin doing my assignment that's due on Monday.

Is P/60 a good estimation of true talent scoring ability?