Share All sharing options for: It's official: PPP Loves the AIHL's Perth Thunder!

Off-season can get weird around this blog. When we aren't having heated arguments about the best hot dog condiments (green olives and hot sauce), or the coolest Star Trek species (Species 8472), we argue about arguing itself.

Last week the management of PPP decided we needed something to cheer for over the summer, so we can have less (non-hockey related) arguments. Stanley Cup of Chowdah sent Zdeno Chara to our homes to force us charmingly invited us to join them in supporting a team in the Australian Ice Hockey League for their season, which conveniently coincides with the NHL off-season.

Two days ago we conducted a very scientific and totally ballot stuffing proof poll to determine which AIHL team we should support, and now the results are in!

After an avalanche of enthusiasm and support from the team's fans, staff, and even players, our choice was clear.

PPP is proud to support the Perth Thunder!

Step 4: Watch for game news and recaps here on PPP.

The AIHL regular season starts April 23. Games are on Saturdays and Sundays.

We will have more details about how you can listen to the games and see the results soon.

Where is Perth, and what time is it there?

Perth is located on Australia's western, Indian Ocean coast. It's a big city with a population of about 2 million.

Time zones can sometimes be a pain to figure out, but this one is easy if you live in Toronto. Perth is exactly 12 hours ahead of Eastern Daylight Time. If you are in another time zone you can use this handy clock!

I love the Perth Thunder!
Which teams do I hate?

The Chowderheads are supporting TWO AIHL teams. TWO! How can you cheer for two teams in the same league at once? I don't know. But I do know WE HATE THOSE TEAMS: The Newcastle North Stars and the Melbourne Mustangs.

We'll have much more on the team, players, and management soon. For now, let's have a GIF party to celebrate our new hockey friends, the Perth Thunder! 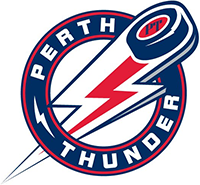