The 2016 NHL entry draft is coming up in less than 2 months, which means it's high time to argue over who the Leafs should select, only to have them take someone unexpected and deprive us all of the chance to gloat. As you are probably aware, the Leafs won the first overall pick in the draft lottery (if you weren't aware of that, I have some good news for you!), so we can't argue about who they should take 4th overall anymore. Fortunately for us the Leafs have 11 other picks in this year's draft, including 3 more in the first 2 rounds.

Scott Wheeler got the "who should we take with one of the later picks?" ball rolling with his piece on Adam Mascherin. In this Fanpost I'll be looking at another player I think the Leafs should be strongly considering: Swedish left wing Jonathan Dahlén.

Jonathan Dahlén is a Swedish left wing. I just told you that. Please try to keep up.

Eliteprospects.com has him at 5'11" tall and 176lbs, which makes him roughly the same size as every other Leafs forward prospect not named Frédérik Gauthier. He was born on December 20, 1997, which puts him on the older end of this year's draft class. His father is Ulf Dahlén, who played 966 games in the NHL and now coaches HV71 in the SHL. Jonathan spent the majority of his draft season in Sweden's Allsvenskan league, where he scored 15 goals and 14 assists in 51 regular season games with Timrå IK. He followed that up with a very impressive playoff performance, scoring 6 goals and 1 assist in 5 games.

Allsvenskan is Sweden's second-tier pro league, below the SHL. Apparently it's officially called HockeyAllsvenskan now because there's also an Allsvenskan soccer league, but I'm not going to call it that. If you're not sure whether I'm referring to the hockey league or the soccer league at any point in this piece, please run head-first into a wall and then continue reading.

All of which is to say that while Dahlén did not face the highest level of competition in Sweden this season, he was still playing against men in a pretty darn good professional league.

What are the scouts saying?

There aren't many detailed scouting reports on Dahlén. In fact, the only good one (ie. not on hfboards) I've found is this one from Jimmy Hamrin at Hockey Prospectus. Some choice quotes:

An agile skater who can fool the defense with quick, surprising turns. He has big upside in his ability to quickly get himself and the puck from the boards to a great shooting position.

Quick release from almost any angle and he shoots accurately. He doesn't shoot particularly hard. Most often he needs to be within the circles to score.

He adds great hands to his agile skating and can create something out of what seems to be nothing.

Dahlén is a constant threat for defenders with his great vision, agility, puck skills and quick and accurate wrist shot.

That all sounds pretty good! In addition to his need to be "within the circles to score," Hamrin feels that Dahlén needs to work on his physicality, his top speed, and his defensive play.

Despite his apparently high skill level, Dahlén tends not to appear on top-30 lists for this draft. Hockeyprospect.com has him at #26 in their most recent rankings (published Feb. 29), and Craig Button has him 52nd on his top-60 list, but other than that he hasn't received much attention from the online scouting community. He did not appear in the most recent top-30 lists from ISS, Future Considerations, Ryan Kennedy (of The Hockey News), Damien Cox (autoplay video warning), or McKeen's. He also did not appear on Bob McKenzie's February top-60 list, which attempts to predict the actual draft order by polling NHL scouts. Our own Mr. Wheeler had Dahlén ranked 55th overall in his November top-60 ranking. Finally, NHL Central Scouting has him ranked as the 11th-best European skater, which makes him the 4th Swede on that list.

So it certainly seems possible that Dahlén will be available late in the first round, and maybe even in the second.

Bigwhite06 made a couple of Dahlén highlight videos: one for the regular season and one for the playoffs. If you don't feel like watching those videos, I've taken the liberty of making some gifs from them (with apologies to mobile readers because I don't know how to make these resize automatically) to help us answer the important questions I'm sure we all have about every forward prospect.

Does he have a wrist shot? 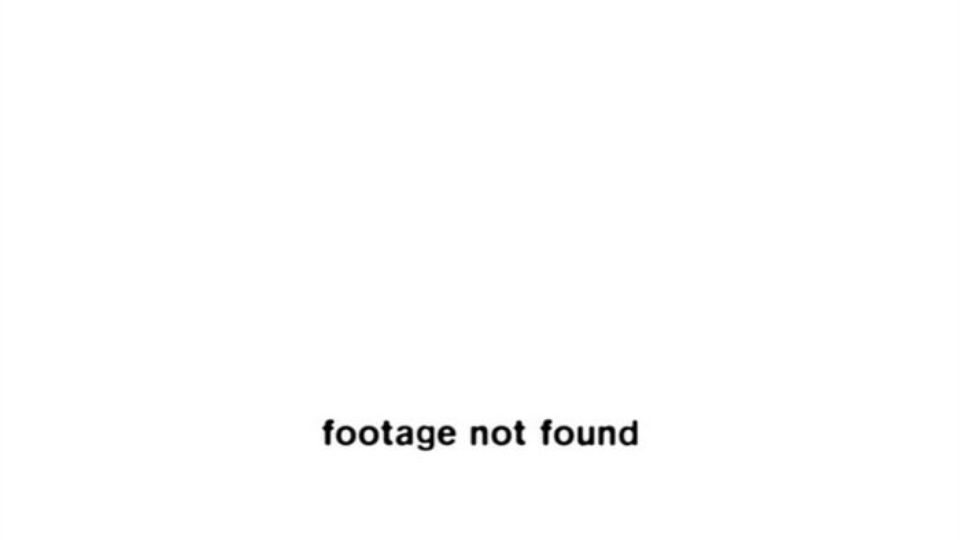 Can he pass while diving to prevent the defender from getting the puck?

Can he go end-to-end and thoroughly embarrass the other team in a playoff game?

You best believe it.

Can he make running into the crossbar look kind of fun?

Now you're talking! To put Dahlén's performance in context, we'll compare him to other players in their same seasons (relative to their first year of draft eligibility) from the past 11 seasons (starting with 2005-06).

First, let's go back to last year, when Dahlén scored 50 points in 40 games in Sweden's Superelit league. How does that compare to other Superelit players in their draft-1 seasons (with at least 20 games played)?

Dahlén's points-per-game rate is the 8th-best on the list. Of the players ahead of him, one is eligible for this year's draft, two are eligible for the 2017 draft, and the other four were all high draft picks, including three top-10 picks. Several players just below Dahlén went undrafted, but there are still some impressive names below him including Filip Forsberg, André Burakovsky, Jakub Vrána, and Alex Nylander (a likely top-10 pick in this year's draft). If we were to extend this list, we would see some more recognizable names such as Kevin Fiala (0.848 P/GP), David Pastrnak (0.806 P/GP), and Andreas Johnson (0.762 P/GP).

If we were to sort by goals per game, Dahlén would be tied with Jakub Vrána for 4th, behind only Grundström, Andersson, and Berglund.

Moving on to his draft year, our pool of comparable players shrinks considerably. Apparently just 38 forwards recorded at least 1 point in Allsvenskan in their draft year since 2005; if we only include those who played at least 20 games, our pool shrinks to 18 players. Let's see where Dahlén's season fits into that group:

Dahlén has the 4th-best drat year scoring rate since 2005. It's true that it's a small group, but Dahlén is still in very good company. There is a noticeable drop-off after the top 5 players, and there are some very good players even after that drop-off.

So this kid is comparable to David Pastrnak and Filip Forsberg?

He's a bit smaller than those guys (although not by much in the case of Pastrnak), but so far the numbers seem to indicate he's at a similar level. Let's dive into that a bit more, though, shall we?

First, let's compare how they got their points in Allsvenskan. 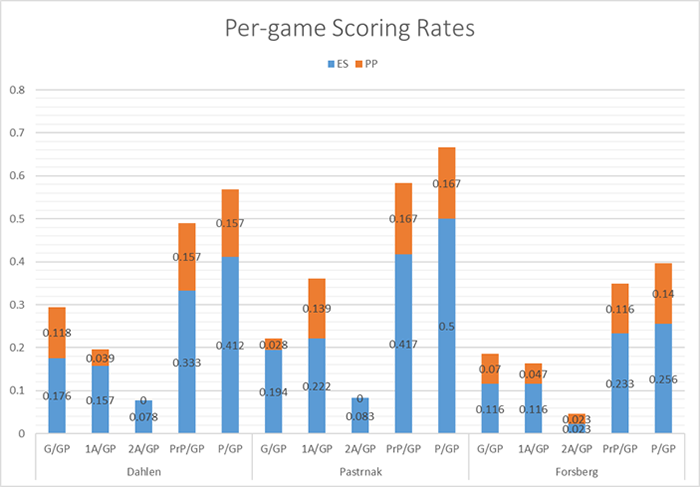 (I should note that we're dealing with fairly small sample sizes here. Dahlén's 29 points in 51 games is the largest sample; Pastrnak had 24 points in 36 games, and Forsberg had 17 points in 43 games. Once we start breaking those points down we get some very small numbers. I still think it's informative to compare them in this way, but it should all be taken with the requisite grain of salt.)

Dahlén's edge over Pastrnak in goals is largely due to his scoring on the power play, but Pastrnak got significantly more power play assists than Dahlén. Forsberg's power play production was comparable to the other two players, but his even strength numbers are quite a bit lower.

Pastrnak has a clear advantage over the other players at even strength, again thanks largely to his primary assist rate. It probably bears mentioning that Pastrnak received what scientists refer to as "The Nylander Bump" later in his season, when Nylander joined his team and they played on a line together. 5 of Pastrnak's 13 primary assists and 2 of his 8 goals came on plays on which Nylander also got a point.

Let's take a look at how the three players' primary scoring rates changed over the season: 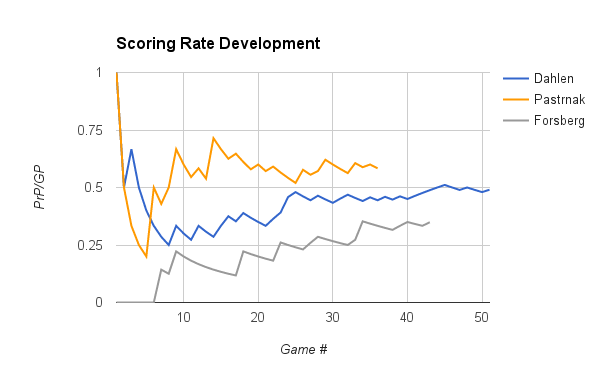 Nylander joined Pastrnak's team on game #26. You can see on the graph that Pastrnak's PrP/GP rate was in decline since game #14, but then recovered when Nylander came on board. Unfortunately his season was cut short by injury, so we don't know how his scoring rate would have looked if he'd had an additional 10 games with Nylander. Forsberg may have benefited from more games played as well, although he just missed the occasional game throughout the season rather than a long stretch of games in a row. Still, he showed the most drastic improvement after a slow start, and may have been able to catch up to Dahlén with more games played. Of course, he may not have scored in those games, in which case his scoring rate would be even lower.

For Dahlén's part, he showed steady improvement in his point production as the season progressed. His scoring rate has a sudden jump up between games #23 and #25, and impressively he was able to maintain that increased pace for the rest of the season. If we factor in his excellent playoff performance, it really does look like Dahlén just got better as the season went on.

Finally, let's compare how much these players contributed to their respective teams. To do this I'll look at their scoring per team goal (I use "tG" to refer to team goals; if there's already a different abbreviation for this that is commonly used, please let me know). The idea is to see how many of their teams' total goals each player directly contributed to. I'm only including team goals from games in which the player appeared. 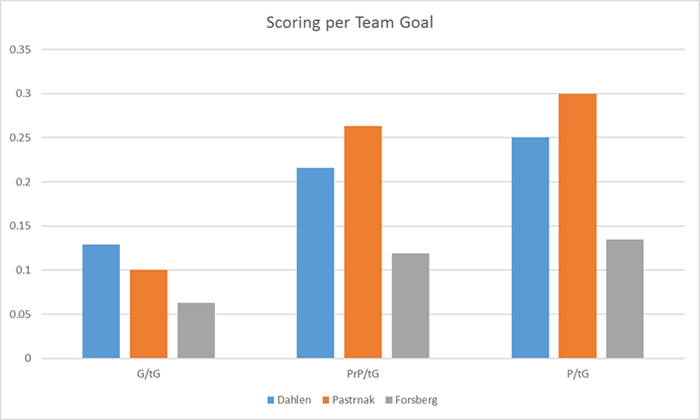 So Pastrnak made the biggest proportional contribution to his team's scoring, but Dahlén wasn't too far behind. Evidently Dahlén was not just a passenger on a high-scoring team (in fact his team had the 3rd-worst goals for total in the league, although that's according to Allsvenskan's official standings which include shootout wins as goals) but was rather a driving force of the team's offence, especially later in the season.

So this kid is better than Filip Forsberg?

Probably not. His scoring numbers are certainly better than Forsberg's in his D-1 and D-0 seasons, but offensive numbers only tell part of the story. Scouts evidently saw ability and potential in Forsberg that they don't see in Dahlén, or else Dahlén would most likely be in the discussion for top-10 picks.

But the Leafs should still probably draft him?

Dahlén may not be as good as Pastrnak or Forsberg, but the fact that he compares so well to players of that calibre makes him a pretty intriguing prospect. The few online rankings that include him indicate that he could go in the late second round, but many of those rankings were written before his excellent performance in the later part of the season and the playoffs, so he may rise on final rankings. So if the Leafs don't trade any of their picks they'd probably have to use the 31st overall to get Dahlén, as there's a pretty good chance he'll be taken by the time Washington's pick comes around.

I'll leave the question of whether he's worth a 31st overall pick to more qualified people. Keep in mind, though, that the Leafs have drafted an "undersized" Swedish forward in the past 3 drafts, and that's gone pretty well so far. Why break that streak now?

Where should the Leafs select Jonathan Dahlén?