I arrived at Staples Center after an odyssey of determining whether I could make my commuter train to LA (I couldn't, for reasons that don't need to be explored at this juncture, but involve road construction), driving into LA, finding a parking spot at Union Station (success!), and figuring out the great mysteries of LA's Metro system and "Tap cards".

(Why not park at Staples Center, since I'd driven all that way? The last couple of exits to Staples would have taken another half an hour, and parking there would have cost $40. Parking at Union Station and taking the Metro cost me $20 total.) 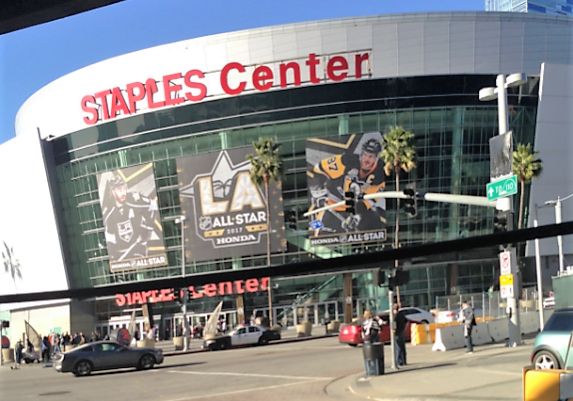 During my trek, I had chatted with a number of fellow hockey fans; and even though I had expected it, it was still a bit of a thrill to approach Staples Center and see so many fans of so many teams converging in one place.

I arrived at about 3:15 PM, met up with my friend who had my ticket, and then went to acquire sustenance. I've been to Staples Center before, both for hockey and concerts, so I know that one of the best places to eat is the BBQ place on the upper concourse. Unfortunately, all the other Staples regulars knew that, too--but management had staffed too few people there, and so I finally slid into my seat with 30 seconds to go before player intros started.

My friend and I were in the ADA section of the 300s (so, the bottom of the nose-bleeds--she rolled her ankle badly a couple weeks ago), so we had a bird's-eye view of things. 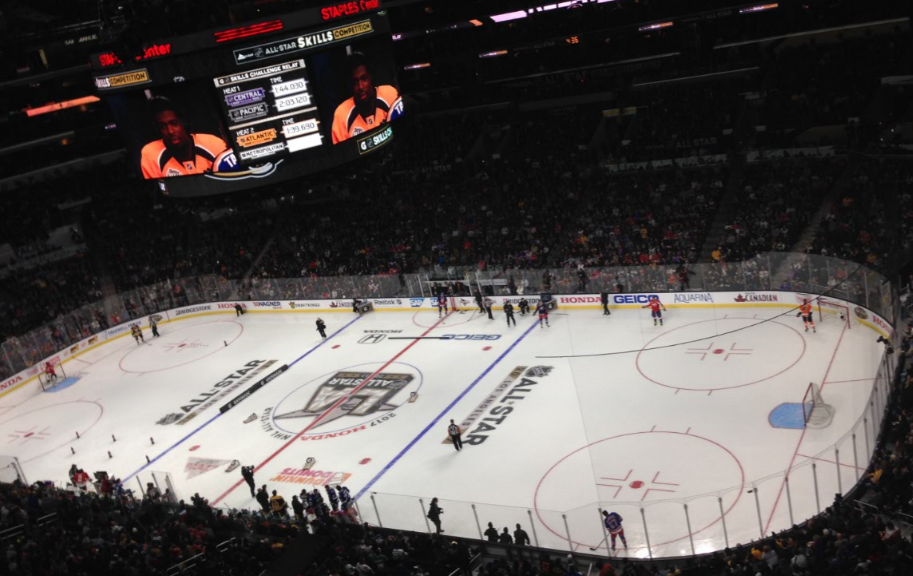 For the record, I cheered very loudly for Auston Matthews. My photo of him skating out is very blurry, though. It took a while for me to notice that the members of the NHL 100 weren't out with the rest of the All-Stars (I was actually busy being irritated that no one had told me that Crosby had backed out of the game again, but then I realized that I also hadn't gotten to booooooooooo a Certain Other Player and figured out what was going on).

In-house announcing was done Jim Fox, because Bob Miller had to be taken to the hospital in the morning. Hopefully, he will be okay. In his absence, Fox did a pretty decent job, except for identifying Carey Price as "representing the Metropolitan Division."

I won't give a blow-by-blow recap of the competition, because it was televised. However, having watched it live, and then watched parts of it on TV later in the day and this morning--it is definitely an event that is better live. Live, it has much less of a feeling of a circus side-show.

We couldn't hear the interviews (except a couple with Roenick), and we didn't have to listen to the commentators. It was great live--you saw players interacting with each other away from camera, giving each other grief, and joking around. You also get a much better feel for the skill it takes to do the things they were doing when watching it live.

The best example of "it was way better live" (and yes, I'm biased--but I took an informal poll of Kings, Canucks, and Sharks fans who were in my immediate vicinity, and they agreed) was Sidney Crosby's performance in the Shooting Accuracy event. On TV (at least, on NBC) the commentators were talking about something else, and seemed to resent having to drag their attention back to the actual competition. In the building, you could see jaws drop--even among the players--as Crosby took each pass, aimed it, and shot it. It was so calculated and deliberate--he knew exactly what he was doing, and it showed.

My favorite non-player moment came when Brent Burns Did A Thing, and a nearby Kings fan yelled "Yeah, Burnsy!", and several other Kings fans cheered with him--and then they all exchanged these "We shall never speak of this again" looks. One of them actually said, "I never thought I would say that. Or cheer that."

Auston Matthews report: Auston Matthews hung out with Frans Nielson while he was sitting on the bench, and was chatting with Kyle Okposo and John Tavares at one point. He seemed a little nervous, but was grinning pretty much every time I could see his face.

Side note: Mike Smith, stop being so adorable with your baby girl.

After the Skills Competition, we headed over to LA Convention Center to see the Fan Fair. It was pretty much as advertised: a massive space with a lot of games, memorabilia, etc.

We arrived two hours before the fair was going to close, so it was a little less crazy in there than it had been earlier in the day. Rumor had it that it had been pretty low-key Thursday and Friday, and a complete mad-house on Saturday morning. The line to see the Stanley Cup was still an hour and a half long, even in the evening. In the morning, it was much longer.

In the Upper Deck Memorabilia area was this utterly creepifying manikin. 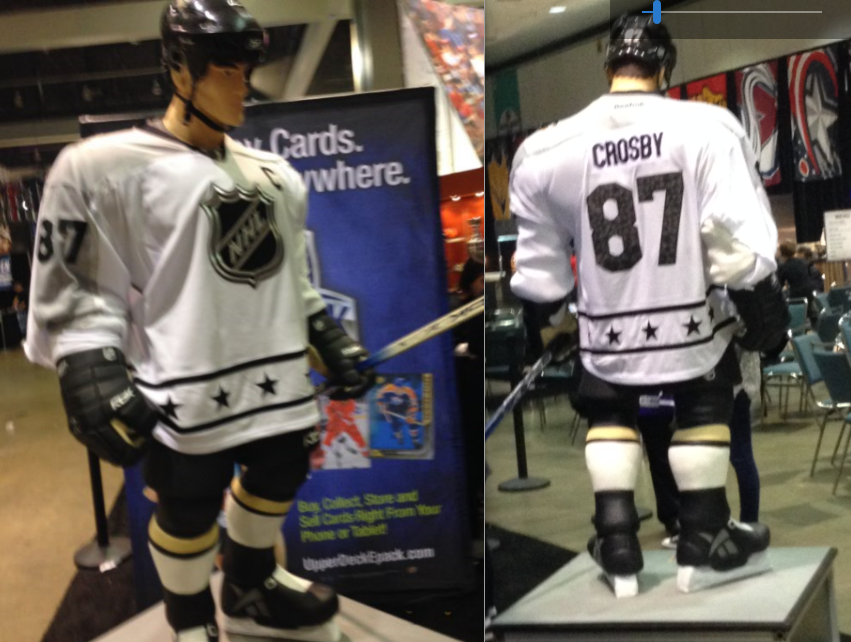 In case you can't tell, they had to rip the All-Star jersey to fit it over the improbably-bulging muscles of the manikin. I can't even.

In less disturbing areas of the fair, there were two of the early Zamboni machines, which was kind of neat to see. Also, the Hockey Hall of Fame exhibit on the Kings and the history of hockey in Southern California. They had one of the original Burger King jersey's on display (horrifyingly, the Kings wore replicas for warm-ups once earlier in the year AND you can now buy replicas--I saw two, yesterday).

We finished up in the souvenir store, where I bought a Crosby shirsey, but not the women's version, because it was of significantly lower quality than the men's one. I also bought it too large, because they were out of everything that wasn't a Small, XL, or XXL. I was told that if I went to the Team LA store that they'd probably have the right size.

My mission to get the right size shirsey brought us out to LA Live, the area across the street from Staples Center (and, in this case, in the street in front of Staples). 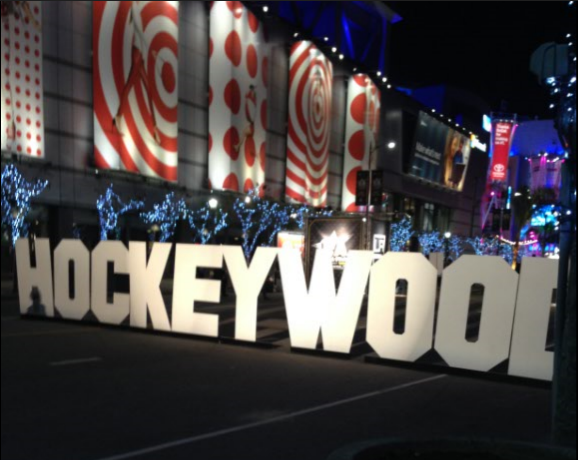 In honor of All-Star weekend, the ice-rink that is there for the holiday season was resurrected. 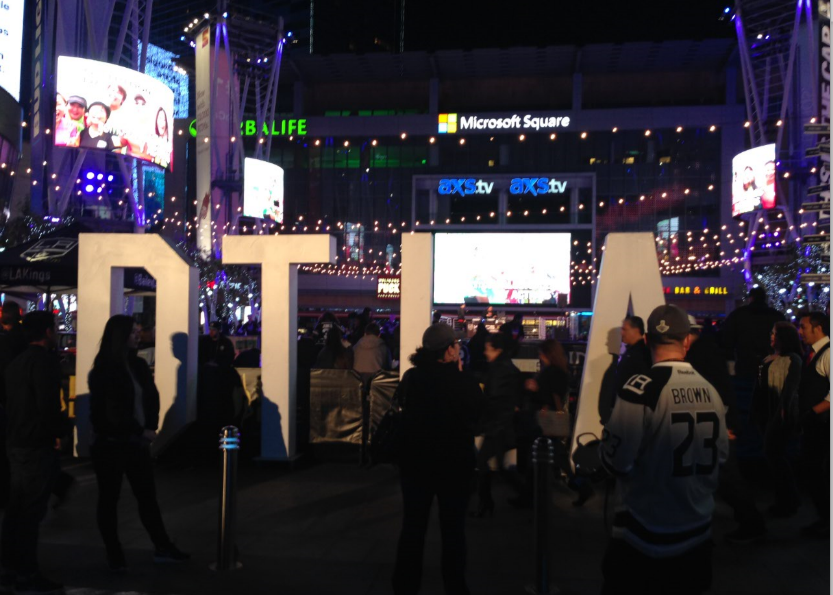 There was also this awesome sandcastle. I've helped build a couple of precision sandcastles before, and they are Not Easy to create. 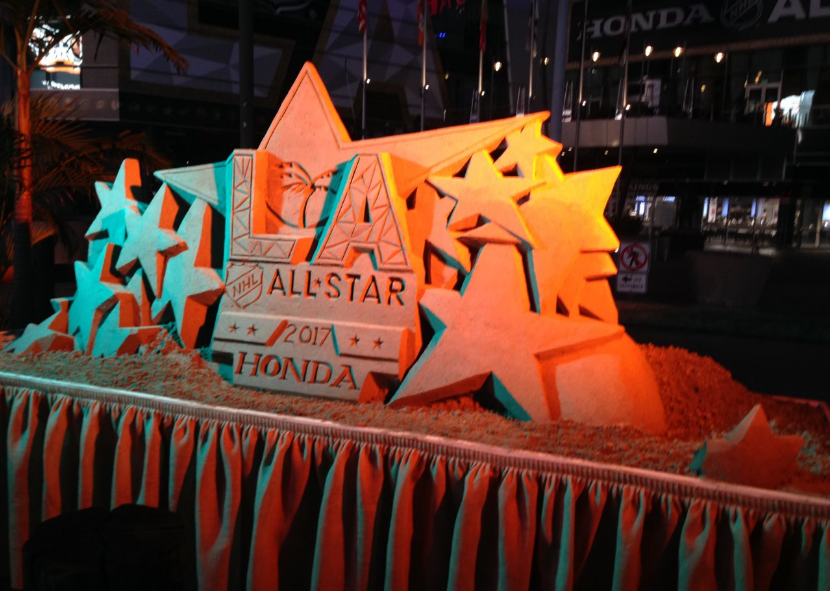 The lighting on this is pretty neat, too

And then, finally, I have to mention the pucks. There were giant, five-foot pucks with pictures of all the All-Stars on them scattered around Staples Center. 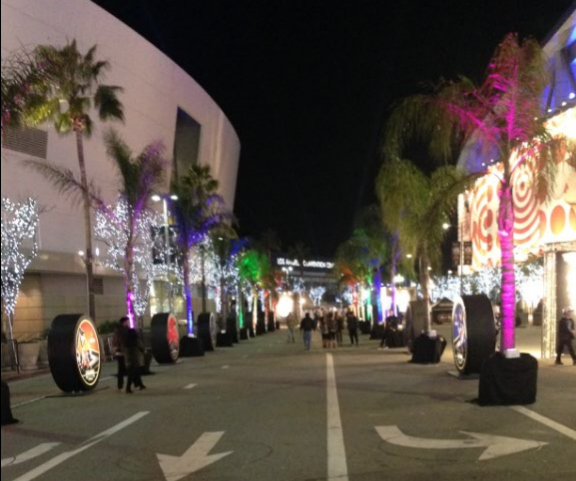 Those things between the palm trees are the giant pucks

So of course, I had to find Crosby and Matthews. It took a while (there were a lot of pucks, and they were double-sided) but I finally found Crosby's! 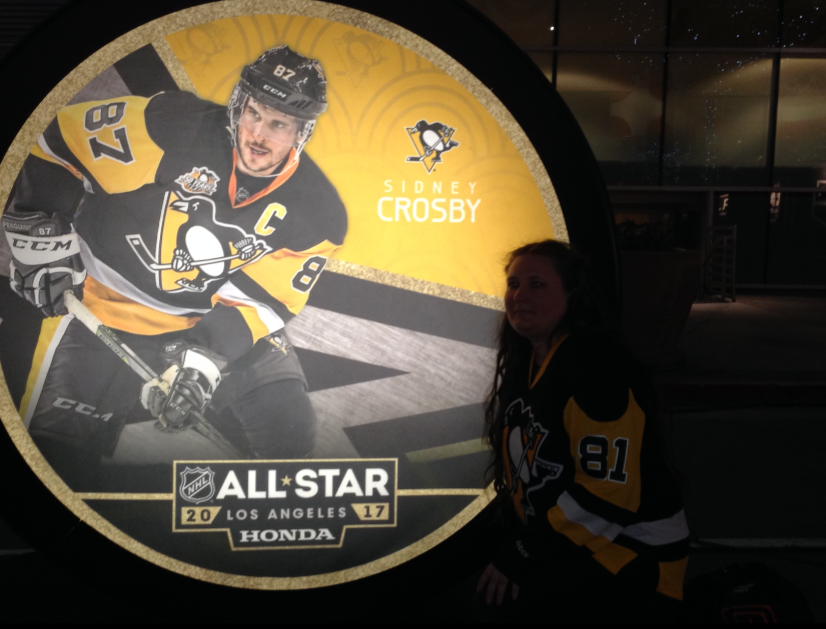 And then, after a further hunt, I found Matthews'! 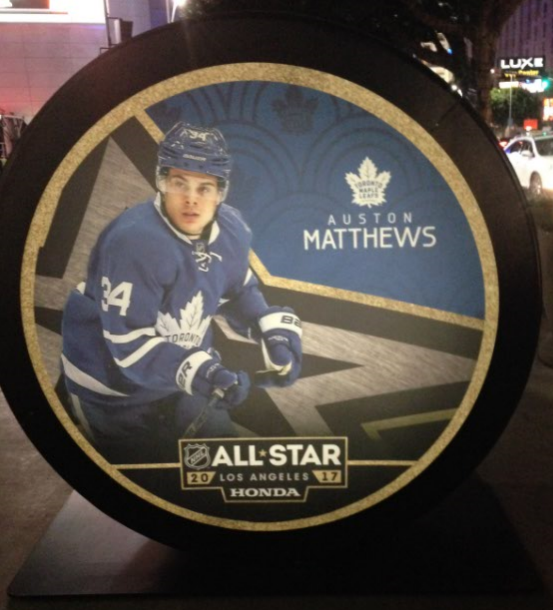 My friend refused to take more photos of me with my camera because of the lighting issues, and she hasn't sent me the ones she took on her camera yet.

At last, we ended up at the Team LA store, where I was able to exchange my Crosby shirsey for one that actually might fit. While there, we ran into a couple of Canucks' fans who were looking for anything--anything--with Horvat's name on it.

We pointed them to the Horvat shirseys, and they almost wept with relief, especially after I said "I think I saw some Bo Horvat stuff over here." The woman said "You're the first person that knew who we were talking about. They didn't even make any All-Star jerseys with his name and number. They said that they ran out of Rs. His parents couldn't find his jersey."

Come to think of it, I don't think I saw his puck, either. Poor Bo Horvat.

If you've stayed to the end of this, I admire your fortitude. My friend and I caught the Metro back to Union Station, and chatted with an older gentleman who asked who won, so we tried to explain the Skills Competition format to him. Finally, my friend just said "Today, they were just showing off, really. The games are tomorrow."

That seems like the best description of it yet. It's fun to watch people who are good at something show off, though.