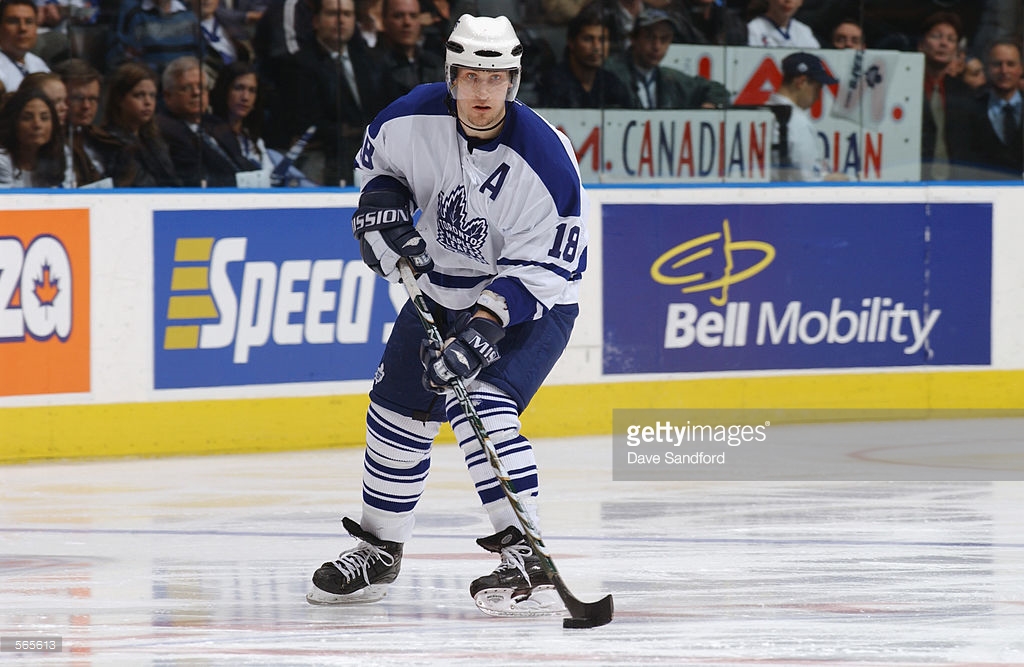 One of my earliest memories is my best friend at the time sleeping over during game 6 of the conference final between the Leafs and Kings. I would have been 6 years old. It was the first time we were allowed to stay up so late, and we were in my parents' basement (foreshadowing my blogging mentality perhaps?) on the pullout couch we used for sleepovers.

We were jumping on the bed, losing our shit while our parents watched upstairs losing THEIR shit. Unfortunately, we were six years old. We fell asleep before the end of the game but DID wake up during the overtime. I can't remember if we saw the end of the game or not, which wound up being an OT loss. My family got a VHS tape that recapped the 1992/93 season and the playoffs. I wore that tape out, listening to Joe Bowen narrate their first great season in a long time (not that I really knew or appreciated that at the time).

I can't really say that my parents were what made me a Leafs fan. Maybe a casual fan to start with, but they've only ever been casual fans themselves. We mostly watched playoff games, seldom regular season games. It was a topic talked about in the same way you share water cooler talk with co-workers. "So.... how about that weather?". That sort of thing. It's probably more accurate to say that being around the Leafs so much is what made me a Leafs fan, like Stockholm syndrome - appropriate, given the constant presence of great Swedish players I've always loved.

I remained a casual fan for years after that series vs the Kings until the Pat Quinn era, when I started to really turn into a hardcore fan. The likes of Sundin, Kaberle, McCabe, Thomas, Berg, Joseph, Belfour, Berezin, Mogilny, Roberts, McCauley, Nolan and others were the players that captured my heart and brought me into hardcore Leafs fandom. All those playoff series against the Senators, all those helmetless rushes by Berezin, all those big toothy smiles by Sundin, all those intimidating glares by Roberts, and so on.

But even then I did not watch many regular season games and I don't remember many moments even in the playoffs. I might listen to sports radio and read newspaper articles about them, but that's it. (Side note: yes, I was once one of those people who believed as the media told me to a lot of the time).

It was the another conference finals that cemented me as a hardcore, rabid hockey fan. This one against the Hurricanes. I was at my uncle's cottage, watching the game 6 last second tying goal to send it to OT on an old CRT monitor with 9 channels and bunny ears to pick up the CBC broadcast. When they tied it late I lost my shit. When they lost in OT I was crushed. But I was a hardcore fan from that day. That whole playoff run is the first I can really remember in detail. I remember Sundin getting hurt, the Leafs having a gruelling series vs the Islanders. I remember Tucker low-bridging Peca. I remember the one goon the Isles had that would hit anything that moved but only for games that were in New York - he was invisible during the Leafs' home games. I remember the series vs the Sens after that, when Roberts and McCauley took over and carried the team. I remember McCauley was my favourite player after that, only for him to be traded soon after.

The next two seasons I was all in. I watched many regular season games. I had an old walkman that played cassette tapes and had an AM radio built in. I used it to listen to games when I was on the bus to and from school, I listened to their huge comeback vs Buffalo - IN BUFFALO - during their stretch when they won only like twice in 10 years in Buffalo while I was working my first job as a cart retriever at Wal-Mart. I listened to their playoff games when I was at a boy scout camp, funnily enough when we had an exchange camp with scout troops from Pennsylvania, so we had some good trash talk with the Flyers fans among them.

After the lockout we all know the rough years the Leafs had, but I was with them the whole way. I was hooked as a hardcore Leafs and hockey fan. My dad always raised me to cheer for the underdog, and that might be why I stuck with the Leafs the whole way. And as we all know, I've always preferred things on the bottom.

P.S. I wrote this specifically because Katya said no one would. :P