Straight up, Luke's an upgrade on Moore. Not huge, but an upgrade.
Thing is, getting Glendening frees us up to make a 2nd deadline deal.
Here’s why.
We’ve all heard that Glendening is better at face-offs than Moore, and has won a whopping 58% this year. And that’s particularly important in one context - on the PK. Glendening is not only better than Moore on the PK, and can eat more minutes there - but he also brings that face-off skill to those added minutes on the PK.
And here’s a thing about that.
If Glendening can win face-offs and play lots of PK, he slots in as the replacement for Leo on the PK. Because Hyman is bad at face-offs, so whoever plays with him has to take most of them. Which is usually Leo.
So you need someone who can not only play the PK as much and as well as Leo, but take faceoffs.
Like Luke.
And since Leo’s regular 5 on 5 role now seems to be as a 4th liner, if you can also replace his PK role - which Moore doesn’t seem able to do - it could give the Leafs [Babcock] the peace of mind they need to upgrade their wingers.
Say, by adding a Rick Nash.
So. Glendening may only be a slight upgrade over Moore during 5 on 5. But by replacing Leo on the PK, that could help the Leafs feel less exposed defensively if they go all in for a Nash.
You can then run Glendening and Hyman on the PK... and during 5 on 5, play Glendening-Kapanen with one of Brown/Hyman dropped down to the 4th line.
More widely, it’s worth remembering that a deep playoff run is a brutal test. Glendening is a decade younger than Moore, and not only happier playing more minutes, but capable of playing a bit heavier/grittier if need be.
e.g. If it’s the playoffs and the Leafs are defending a lead, and it’s grunt-work in front of the net, he’ll help people more than a Moore.

As for next year, salary-wise, sure, Glendening costs $1 million more than Moore. But he’s $1 million less than Leo.
I’m a Leo fan, and would love to see us keep him for this playoff run, say, as the13th man. But you can see both short-term why Glendening might work, and longer-term how he’d help us fill Leo’s role.
[Also, I tend to like having this ability around in various places -> Luke vs Ekblad.]
Twitter summary: "Luke + Rick Nash > Moore + Uncle Leo."

They're The Real Thing.

You may not like it, but the real rising rivals for the Leafs are... the Jets.
Because if you match up their kids with ours, the resemblance - both in age and output - is freaky.
The twinning keeps going, down into the defence.
More kids?
Somewhat older forwards? 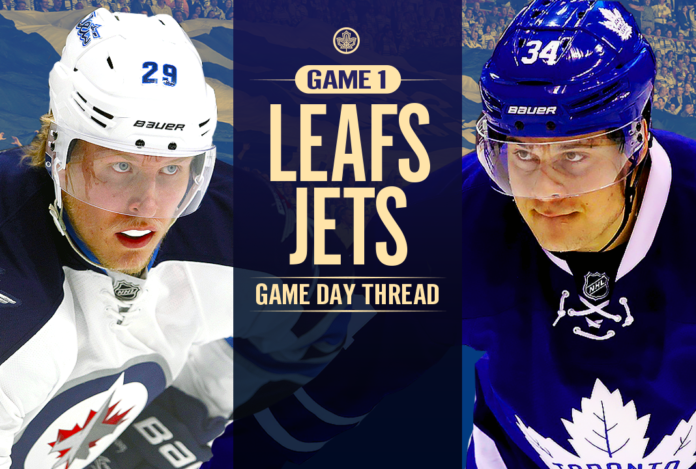 Now, if you ask me to pick, well…
So while we Leaf fans can all enjoy the Oilers wasting their rebuild… and the Habs and Sens and Canucks imploding…. it’s the Jets who have become the obvious, rising challenger in the West. And it looks like they're running just ahead of us.
Twitter summary: "Leafs v. Jets? Get used to it."

The Thing Is Deep.

The scoring wealth of the Leafs is best seen not in the top individual scorers [where Powerplay artists tend to dominate], but in the sheer number of players the Leafs have amongst the top tiers of scorers.
Not only have the Leafs scored more 5 on 5 goals than any other team this season, but the breadth of the attack is stunning.
For example, if you took the Top 3 scorers on each team ranked by 5v5 Points per 60, the Leafs have 6 players make it.
In short... the Leafs are running two top lines.
Look deeper, and the Leafs have 8 forwards scoring at the pace of the Top 4 forwards of other teams - plus Connor Brown is just behind.
On defence, the Leafs have 6 of the top 73 [if you make allowances for the kids having played fewer minutes.] Rielly and Jake are near the very top of the league, but Dermott and Borgman are scoring very well, and even Hainsey and even Polak are not scoring badly during 5 on 5.
Twitter summary: "Babcock's secret? Running two first lines."

And yes, HANDS IN THE AIR should be the Leafs new goal song. And YES, OBVIOUSLY, the whole thing.

At 5 on 5, Zach Hyman will allow roughly 62 shot attempts against per 60 minutes, and 1.9 goals against per 60. When Hyman is killing a penalty, that number rises to 102 - and his goals against rises to 4.5 per 60.
Ron Hainsey sees his shots against soar from 62 to 105, and goals against from 2.4 to 5.9.
And… we all understand why. When you’re killing a penalty, the other team gets more shots on your goal, and scores more often.
Simple.
Except, it’s not so simple in the transitional 10 seconds or so when your team’s penalty against is wrapping up and your 5th team-mate is still getting back into the play.
During which time the other team often controls the puck in your end, with all their top offensive guns out, and - to make things worse - your penalty-killers are often exhausted.
And so, during those 5-10-15 seconds, the other teams often turn those advantages into more shots on your net, and more goals against.
Which is why we tend to see players give up 120 shots against per 60 minutes during the PK, and 60 shots against during full 5 on 5… but with the rate only slowly falling back from 120 to 60 during the transition seconds.
The statistical problem this creates is that, for the PK skaters, those excess transitional shots against - and goals against - are registered in the official stats as having taken place during "5 on 5" play.
Now, when PK and PP minutes are shared evenly across team-mates, these statistical differences don’t matter that much.
But in Toronto, this year… they matter. Because Mike Babcock is absolutely loading PK time onto a very few players.
And in particular, onto two defencemen - Ron Hainsey and Nikita Zaitsev.
For example, Zaitsev has seen more than 4 times the PK minutes of his partner Jake Gardiner - 139 to 29 minutes. Each night, Zaitsev sees 2:30 more time on the PK than Jake.
These ratios are then reversed on the Powerplay. Jake has 136 minutes, Zaitsev has 13. So Jake gets ~2:00 more per game.
Which is as it should be - based on their skill-sets and the team’s needs.
But it also means we shouldn’t put too much weight on the 5v5 differentials in shot attempts & Corsi between defensive partners Hainsey vs Rielly, and Jake vs Zaitsev.
For instance, Jake’s 5v5 Corsi is 48.6% while Zaitsev’s is just 45.7%. Quite a gap. And Hainsey’s is 48.3% while Rielly’s is 50.0%. Another real gap.
Except that that Jake vs Zaitsev gap, when you look at it, consists of just 75 shots. So when you take into account that Zaitsev has been out there for the end of perhaps an extra 50 penalties or so…. he's going to eat a lot more shots against. And they'll recounted as "5 vs 5." And Jake’s been on for those extra PP seconds as many as an extra 50 times. And well... I’m sure others have done the math already. But the Corsi gap shrinks pretty quickly when you take account of these transitional periods.
And the same for Hainsey and Rielly.
The nice thing about this understanding is that it helps us understand the other quite outrageous Corsi results we see from certain defensive pairings - like Zaitsev and Hainsey. Apparently, they’ve had 71 minutes together this year, but with a disastrous 32% Corsi.
Which would mean Babcock must be insane to ever put them on the ice together.
Except… much of that 71 minutes actually includes those nasty spill-over seconds, from dozens upon dozens of penalties.
The point here being that while it’s immensely useful to start with Corsi and to look at WOWY’s, it’s also necessary to look more widely, and in particular, at how players are being used to fill special teams roles. [And yes, it also applies - but in a reduced way - to forwards like Hyman, Leo and Connor Brown.]
Twitter summary: "Zaitsev & Hainsey - Not as bad as their Corsi."

Is that you, Zaitsev? Zaitsev?!!

Auston Matthews should win the Lady Byng this year.
Just 4 penalty minutes, the lowest of any major scorer.
All that while taking an incredible number of hacks, and all without a goon on his wing.
And I know, I know, it’s just the Lady Byng.
But it’ll look nice next to the Conn Smythe.

Stupidest thing you ever heard of: