Mason Marchment - from the ECHL to an NHL contract - Christian Bonin - TSGPhoto.com

As a Toronto transplant to St. John’s, speaking about ‘The Community’ will always ring a bit hollow. You see, no matter how long I live here, I will perpetually still hold the title of Come From Away (CFA). Be it my height (I tower over most native Newfoundlanders), my unusual surname (in that it’s not one of the ten common surnames on the island), or the way I "butcher" the pronunciation of this province’s eclectic towns (seriously, how does Bauline become ‘Baleen’ or Pouch Cove become ‘Pooch Cove’), I inevitably out myself to a native Newfoundlander as a CFA within the first ten minutes of meeting them.

You see for all the ink spilled about how kind and generous Newfoundlanders are – and I’ve never met a group of friendlier or more giving people – there is still an insular, protectionist streak that runs through the rock that I think informs the very muted enthusiasm to hearing about the return of hockey to St. John’s.

The St. John’s Maple Leafs were little more than an abstraction to me growing up; a place where Nathan Dempsey was perpetually banished and where storms were a bigger obstacle to call ups than talent. They left the city well before my arrival, leaving only the slightly terrifying statue of Buddy the Puffin at the children’s hospital, so I can’t speak firsthand of the impact to the city.

Originally founded in 1991, after moving from Newmarket, St. Catharines and Moncton, it was one of many minor league affiliates of Canadian teams that cropped up Atlantic Canada in the 80s and 90s, ostensibly so that the players could travel quicker, but more likely so that minor hockey league players could be paid in the cheaper Canadian dollars (which sounds perfectly like the Ballard era Leafs).

However, as teams moved towards more central, in-house development of their players, it made less sense to have their minor league team in a far-flung location, and so one-by-one the minor league teams started moving out of the east. St. John’s was the last of these relics, which is truly impressive when you realize that St. John’s was likely the most difficult city to travel in and out of.

On a peripheral island, with no road access, and with weather that ranged from ‘winter annoyance’ to ‘frosted hellstorm’, it is not uncommon to have flights delayed multiple days while waiting for winter weather to clear out, which can start as early as October and end as late as May (as I write this, the forecast is calling for 15 cm of snow and freezing rain tomorrow).

Of course, these months also being the months hockey is played, it made team and player travel more than a little difficult. Moreover, in the 90s, the economy was still reeling from the cod moratorium, a disruption of a major industry in the province which lead to an unemployment rate of over ten percent. Even twenty years out, it’s effects are still being felt here in the province, and more than a few locals still hold bad blood for the outsiders in Ottawa who destroyed an economic and cultural tradition in the province.

But in spite of those obstacles, the team continued to thrive, maintaining a steady attendance and popularity with the locals, despite only one Calder Cup appearance.

Now, stop me if you’ve heard this one before –owner of sports team claims that without a new stadium the team just won’t be financially viable and they’ll be forced to move. Well, St. John’s was no exception, and a new stadium was constructed on the public dime to house the Baby Buds. Unfortunately, once the Roadrunners, Edmonton’s AHL affiliate moved out of Toronto, and with a shiny new Ricoh Coliseum in the wings, it was only a matter of time until St. John’s would also be a casualty of relocation.

Ignoring that since the opening of the new stadium attendance had risen by an average of 1200 people, MLSE cited the new location making "more economic sense" for the teams. Never mind the economic sense of saddling the city with 4.5 million dollars in debt for a stadium that now had no tenants, the Leafs would do what’s best for them. One more set of outsiders shaking up the economy of Newfoundland for their own good.

Danny Williams, native son, ex-premier, and businessman who has made a career out of rabble-rousing with non-Newfoundlanders, negotiated to bring back an AHL team to St. John’s, relocating the Manitoba Moose once the Thrashers moved to Winnipeg, though they continued to be owned by TrueNorth Sports Entertainment, the Winnipeg based consortium that owned the Jets.

Again, the team was embraced by the locals – attendance numbers in every year of their existence surpassed any previous years of the St. John’s Maple Leafs, and they even reached the Calder Cup finals in 2014. And what was their reward for this success? Relocation back to Manitoba, citing – you guessed it – travel difficulties and a desire for their minor league team to be closer to the parent club. Another day, another CFA dangling the promise of something nice, only to have it snatched away when it is no longer convenient for them.

Danny managed to get the Habs to bring their AHL team over from Hamilton for two years, but there are only so many times you can cry wolf before people start to catch wise. Attendance was never the same, dipping below 5000 people for the first time since 2004, and enthusiasm had finally waned for a team that, even when they were moving over, had rumours of subsequent relocation.

They weren’t helped by the downturn of the oil industry, an area that had been a major source of income from the province. The second iteration of the IceCaps lasted two years before relocating to Laval, to (all together now) make travel easier and bring the AHL club closer to the NHL club.

I was there for the final home game of the IceCaps, ironically against the Marlies, and despite all the flowery speeches, gushing tributes, and declaration of admiration to the city and the province, the whole evening had a somber sense of finality to it; the last chapter in the history of hockey in St. John’s. 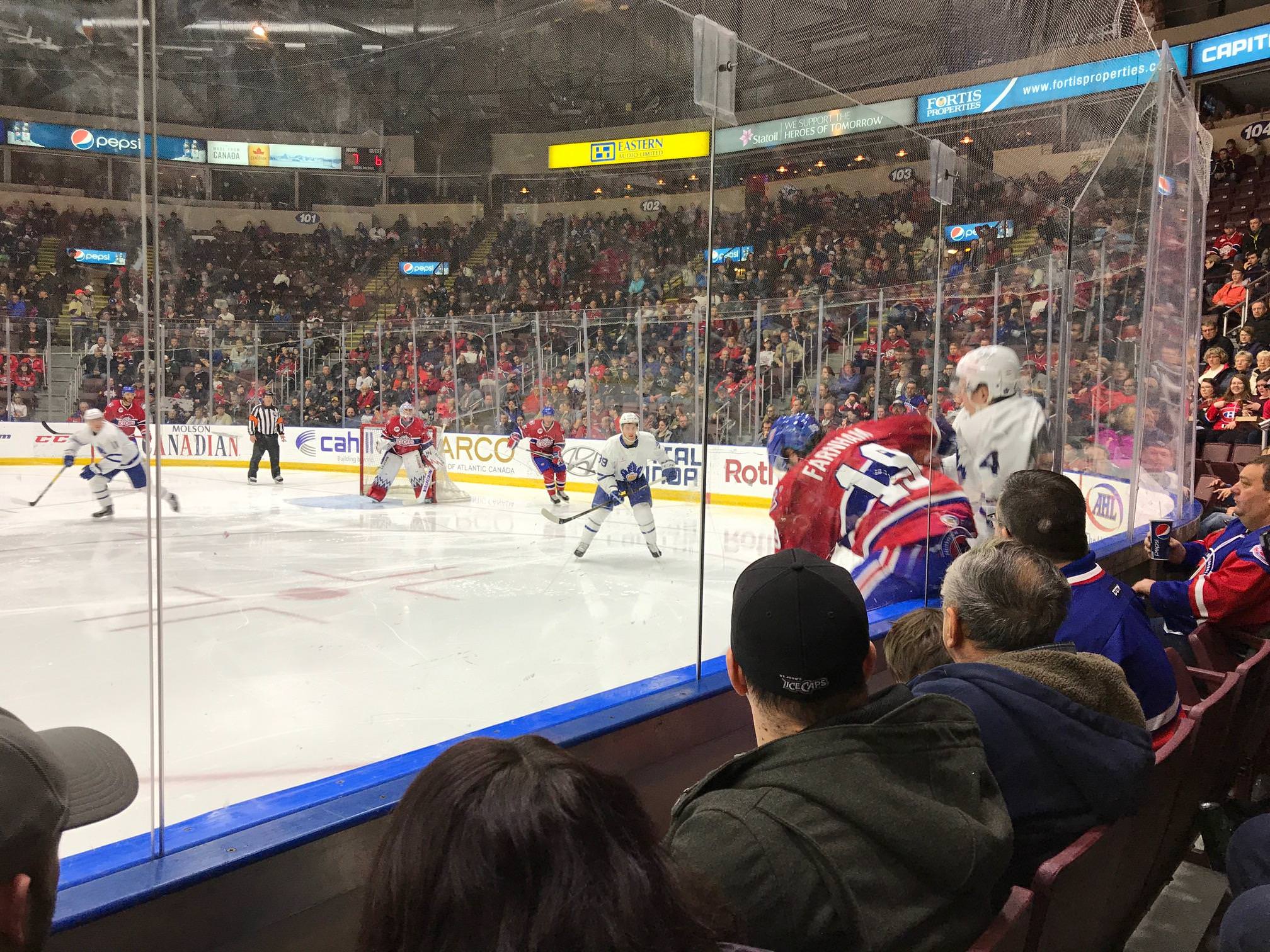 Last Game at Mile One

With this background, you can understand why the announcement of the new ECHL team has not been met with great fanfare. There has been little buzz in the streets about this team, and outside the initial announcement, there’s been little press about it either.

After all, this is one more example of another group from the mainland – one that’s already burned the city before – promising that this time they are totally dedicated to the city….at least until it stops being useful for them.

So even though can’t possibly speak to the psyche of the province the way a true local can, I understand why people here have their misgivings about CFAs. Be it the federal government, petroleum industries or sports conglomerates, the history of Newfoundland with the outside is one of use and abuse, of taking what is needed and then disengaging when it’s no longer an advantage.

I’m hopeful that this new ECHL team can stick in the city (and if the success of the Edge basketball team shows anything, it’s that this is definitely a sports hungry city) but it has the weight of decades of mistreatment to overcome. I know this CFA will be eagerly awaiting hockey’s return, and is excited to see some connection to my hometown Leafs back in St. John’s. 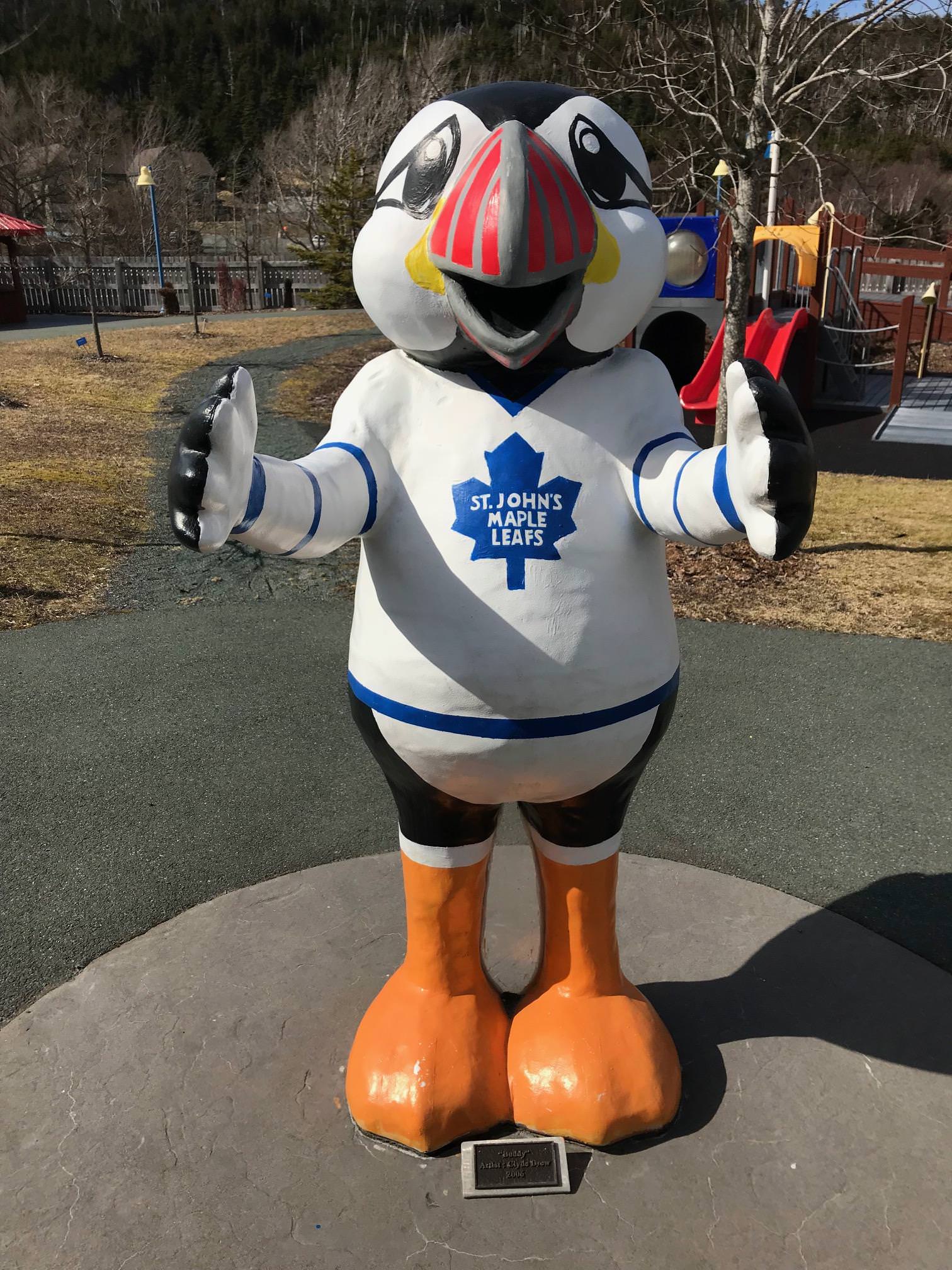 Buddy is still terrifying though