One of the biggest questions facing the Leafs in the 2018 offseason is William Nylander’s contract. While it is likely that Marner and Matthews are also signed this summer, both have another year of ELC remaining, while Nylander’s expires July 1. With the announcement that Lou Lamoriello will not return as GM, the Leafs new general manager will have to decide how to approach the negotiations.

There is a decision whether to bridge Nylander with a deal that would end with RFA status (somewhere in the 2-3 year range) or sign him to a long term deal. I personally don’t see much of a debate on this issue – Nylander is an elite talent and core piece of the team, both now and moving forward, and the team owns his rights for the foreseeable future. Long-term contracts for core players like Nylander, assuming they are not negotiated poorly, generally provide more value than bridge deals. Given what we know about player's prime years, the more the contract covers a star player's 20s the better the value, in general. Such a contract would also fit with the vision of this team as a long-term contender and the goal of being dynastic in the Pittsbugh/Chicago mold.

So the only question remaining is what does a long-term contract look like for Nylander? The answer is found in his three closest comparable players – Nikolaj Ehlers, Filip Forsberg, and David Pastrnak. All three players were first round draft picks who signed long term contracts out of their ELC at the age of 21 or 22. Equally important, all three players produced at a comparable output to Nylander and played in similar roles on their respective teams.

Many factors go into contract negotiations for restricted and unrestricted free agents, but when the player in question is an RFA the discussions are less about what the player wants than what both sides can agree is fair. In that way, RFA negotiations are fundamentally similar to a salary arbitration, in which the arbitrator bases their decision heavily on which side’s selection of comparable players rings truer.

The thing to remember is that in any negotiation, showing one's work is a good way to strengthen one's argument. It would be both easy, and possibly accurate even, to say that Nylander deserves anywhere from $6M to $7.5M on his next contract. However, presenting the exact way that you arrive at your number shows thoughtful analysis and takes away the wiggle room in a negotiation. Moreover, framing your position in this way presents a stronger argument by narrowing both the range of options and the issues to be decided.

Given that all these players were first round picks with established roles on their teams, we can focus the comparison on their respective baseline stats. 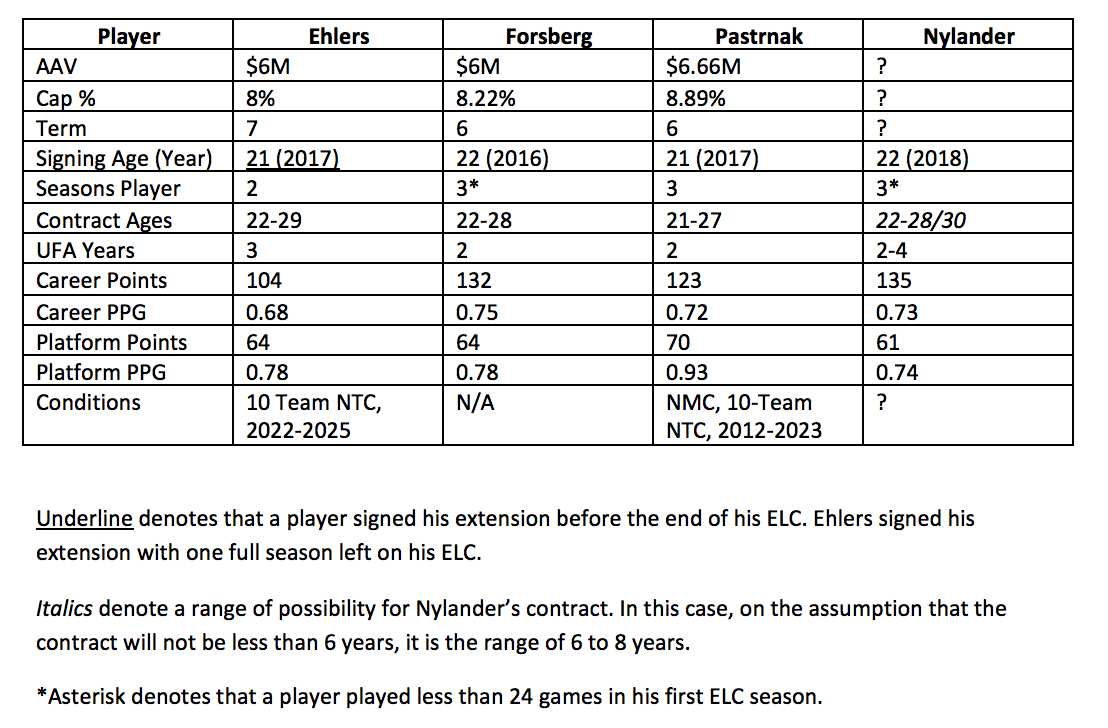 The biggest drag for Nylander is that lower platform year production. It’s the lowest of our comparable group, and the only one not to progress from the previous season. That said, it’s a difference of 3 points all season.

It appears that Forsberg is the closest comparable for Nylander, so the easiest call to make is 6 years at $6 to 6.2M (taking into account that Nylander had a slightly lower career and platform PPG, so we don’t have to give him 8.22% like Forsberg). That said, Nylander’s numbers track closer to Ehlers than Pastrnak, which is good for the Leafs if they want to negotiate a longer deal.

The length of the deal, and therefore the number of UFA years, is the largest variable in these negotiations. A 6 year deal buys 2 UFA years, but an 8 year deal buys 4, and would raise the AVV significantly. That's where you'd want to look at Ehlers' deal for a closer comparable. Even with that third UFA year it's cheaper than the other two, which one could argue is a result of him having the lowest career PPG of the group.

If I'm the Leafs, I'd use Ehlers' deal in the negotiation to anchor the price of a third and fourth UFA year in the deal. Given that Nylander would have a lower platform season PPG than Ehlers, but a better career PPG, I'd make two offers.

The first would be a 7 year contract at 8.22% of the cap. This is a mixture of Ehlers’ and Forsberg’s contracts given that Nylander’s career and platform season production places him somewhere in between those two players, and acknowledging that if Nylander was to only take a 6 year deal, he would get Ehlers’ cap percentage as an AAV. With that number as an anchor, the Leafs can offer Nylander a contract with Forsberg’s approximate cap percentage for Ehler’s seven-year deal. With the cap likely to be set at $78M, this would mean an offer of $44.8M over 7 years for an AVV of $6.4M.

The transition from a 6 to 7 year deal is relatively simply given that we have a 7 year comparable in Nik Ehlers. However, the transition from a 7 to 8 year deal is comparatively complex. There are very few good 8 year comparable contracts for us to use. The comparable 8 year deals - Mark Scheifele, Vladmir Tarasenko, and Leon Draisaitl - are all over the map. Scheifele's is likely a steal, Draisaitl's is an overpayment, and Tarasenko's is fair, but he also had better numbers than Nylander. And of course, the question of center vs winger complicates both these comparable contracts, and Nylander's own contract.

The other option is to use the progression from 6 to 7 year deals to price out an eighth year. Essentially, we are trying to figure out what the price of a UFA year would be. There are a number of methods we can use, but remember that we’re trying to plan out a negotiation, not creating a scientific model.

The first method is to simply take what we did when transitioning from a 6 year to 7 year deal. Remember, we concluded that given Nylander’s place between Ehlers and Forsberg, the logical 6 year deal would be 8% of the cap (Ehlers’ AAV), and the logical seven-year deal would be 8.22% of the cap (Forsberg’s AAV). Given that an extra UFA year comes at a cost, it is logical to say that it would cost 0.22% more – bringing the AAV to 8.44% of the cap ($6.58M for a $78M salary cap).

This is probably a fair contract given our comparable players, but it rests on a somewhat shaky assumption. I’ve presumed that the minimum contract will be 6 years, but the only reason for that is that it five or less years would be closer to a bridge deal. However, the Leafs could sign Nylander to a deal spanning one to four seasons in length without buying any UFA years, and therefore if we are going to be more scientific we should see what each UFA year costs.

Pricing Out RFA vs UFA Seasons

So what would Nylander get in bridge deal that buys zero UFA years? It’s very difficult to say, because most of the time a bridge deal would only be in the two to three year range, and rarely do players with Nylander’s draft pedigree sign these types of bridge deals out of their ELC contracts. Subsequently, most of our comparable players signed their first RFA contracts at older ages than Nylander will. That said, a brief glance at the comparable contracts indicates a fairly low AAV, generally around 4-5% of the salary cap. I think we can safely set an RFA price for Nylander at $4M per year (roughly 5% of the $78M cap).

So what about UFA years? I think when we’re talking about negotiating extra years, remember that Nylander is giving up potential future earning for security now. That means that it doesn’t make sense to price out what Nylander would earn when he goes UFA at 26, but rather what he would earn right now as a UFA. That is a pretty tough task, as teams have gotten a little wiser to the fact that when they sign UFA players, they generally are not getting their prime years, whereas Nylander would be entering his in the next few seasons.

To put it another way – many players who put up the kind of numbers Nylander has in the last two seasons earned somewhere in the realm of $5-6M per year, with the acknowledgement that their contracts will likely diminish in value each season. Nylander’s value is likely going to increase each season of his next contract, so this skews our comparable contracts. With that in mind, let’s peg Nylander’s UFA price at $9 million, even if it’s a bit of a wild guess. Here then is how an eight-year deal would shake out. 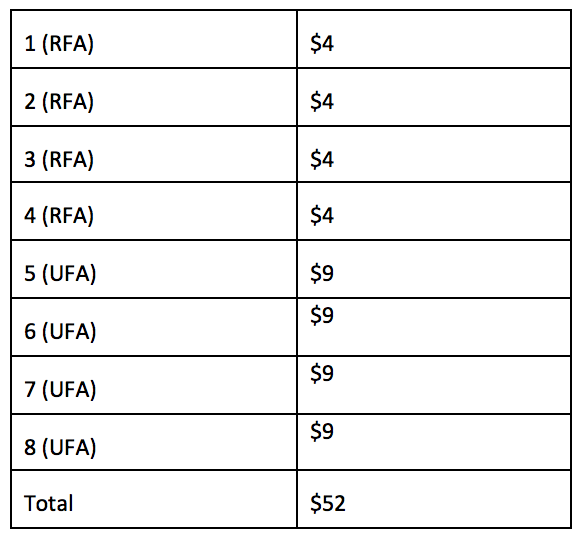 This projection actually comes in at a lower AAV (of $6.5M) than our previous method, which is advantageous for the Leafs. Now, I think comparable contracts tend to play a larger role in negotiations than the kind of speculative analysis that this method would employ, but even so that’s a fairly tight range.

Here’s how those respective RFA and UFA prices affect the contract at different lengths: 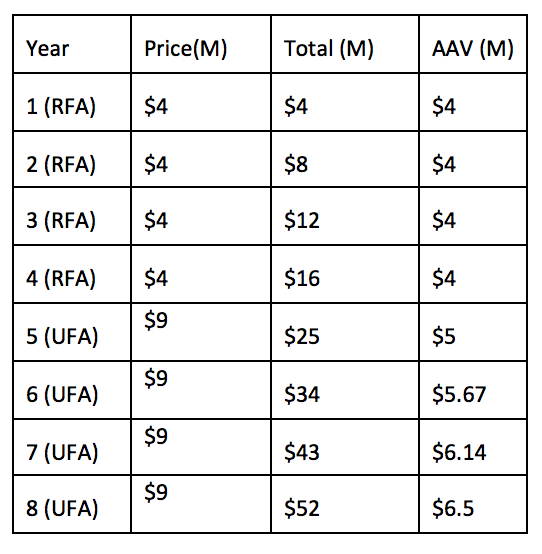 Under this method we get a lower AAV than our previous method the fewer years we put on the contract. Taking that into account, I’d stress that negotiations are more likely to be based primarily on comparable contracts rather than this sort of mixed salary model.

As I said, I think that the comparable player analysis is the likely starting point for any negotiation, but pricing out Nylander's RFA and UFA seasons gives another dimension for negotiating his contract. Both methods give a fairly small range for an 8 year contract, although the difference increases in the 5-7 year range - this could also reflect that Nylander's UFA price could be higher than I set it. It would be difficult to imagine Nylander accepting an AAV below $6M on a 6 year deal, because a comparable player like Ehlers is going to present a much more poignant argument than the relatively vague prices used in the second method.

Nonetheless, if the Leafs are aiming to extract as much value as possible out of this contract, they are better off swinging for a 7 or 8 year deal, even if it is slightly more expensive than a 6 year contract. It's also worth remembering that these methods are arguments in a negotiation, and the strategy for the Leafs could be to mix the two approaches. They could start off by offering a 6 year deal at $5.67M, and later offer a more enticing 8 year deal for $6.5-$6.6M, or a 7 year deal at $6.4M.

Regardless of the specific path they take, the Leafs' end target for Nylander's extension should be a 7-8 year deal with an AAV of $6.4-$6.6M. Such a contract would not only recoup excellent long term value, but it would also serve to anchor both Marner and Matthews' long-term extensions as well, allowing the Leafs to lock in their core for the next decade at great value.