The AHL All-Star Classic Skills Competition was held at the Toyota Center in Ontario (the one in California, not the one in Canada) on Sunday. It's the first such AHL event to be hosted by a team in the new Pacific division, and, as Ontario Reign season ticket holders, we've been hearing about it for a year and a half, so it's good to end the anticipation and get on with the event.

The first event of the day was a mini-carnival, with the usual ring-toss style games, along with food trucks and more "spin the wheel for a free prize" booths per square foot than I've ever seen.

At 2:40, though, the players were scheduled to arrive and do a red-carpet "high-five line", so that's where I set up camp. Unsurprisingly, the bus was running about ten minutes behind, but eventually, the red carpet event began--starting with the AHL mascots (I got a hug from Tux, the WBS Penguins mascot, because of my jersey).

Then, finally, were the players. The MC of the red carpet read out names (with highly questionable pronunciations) very, very quickly, but here are a few of the players that I am at least fairly sure that I identified correctly. (Sidenote: BaseballAnnie, there were some Looks and some Suits out there, if you want me to get some of the photos to you.) 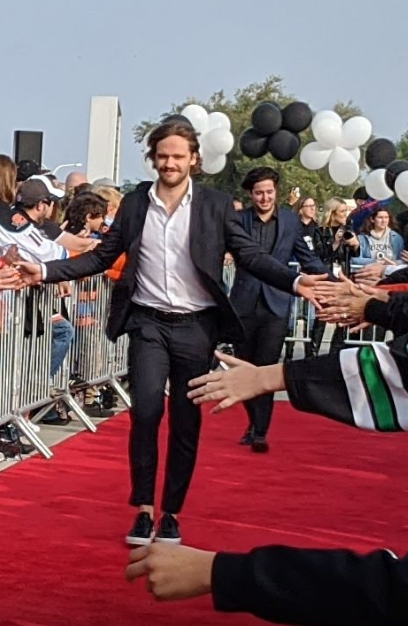 Timothy Liljegren arrives on the red carpet at Toyota Arena ahead of the AHL All-Star Skills Competition, January 26, 2020. 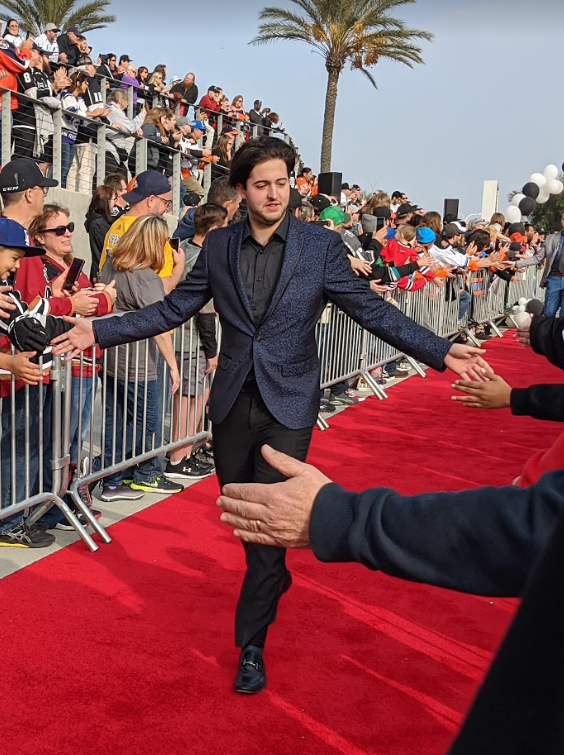 Jeremy Bracco arrives on the red carpet at Toyota Arena ahead of the AHL All-Stars Skills Competition, January 26,2020. 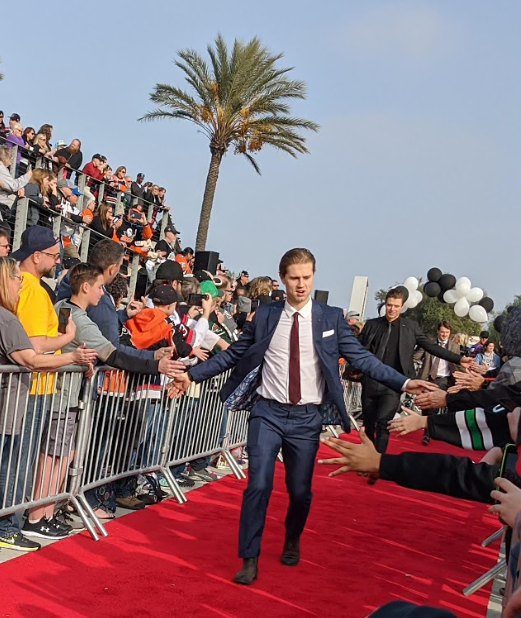 Kasimir Kaskisuo arrives on the red carpet at Toyota Arena ahead of the AHL All-Star Skills Competition, January 26,2020.

(I was going to say "pre-game", but there was no game)

After the red carpet, everyone headed inside the arena, where we discovered that the glass at center ice had been removed, allowing fans access to the players. Fortunately (given where my seat is) the glass was left up around the goals.

An interesting thing I noticed: proving that companies are looking for places to put ads all over the place, a short strip was added to the bottom of the glass (where the glass was present, at least) with an ad for Ontario Airport, the primary sponsor for the All-Star Classic.

My seat is next to the Zamboni tunnel, so I was able to grab a birds-eye view of the mascot group photo. 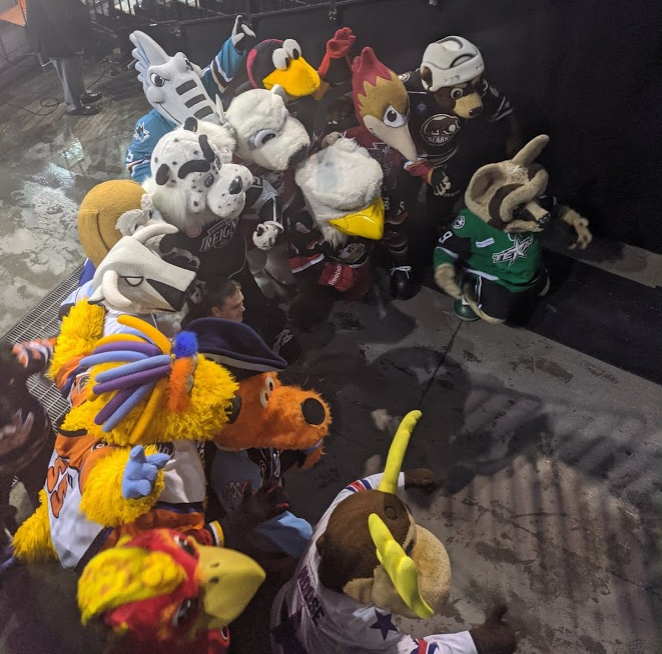 AHL mascots pose for a photo at the AHL All-Star Skills Competition, January 26,2020

During warm-ups, I accidentally captured several short videos instead of photos (because I have a new phone, and technology is confusing) but I was able to get a few stills, too. For instance, this one of Bracco and Alex Barre-Boulet, chatting with one another during warm-ups. (Yes, I blanked out the face of a minor--I don't have a photo release and I am paranoid.) 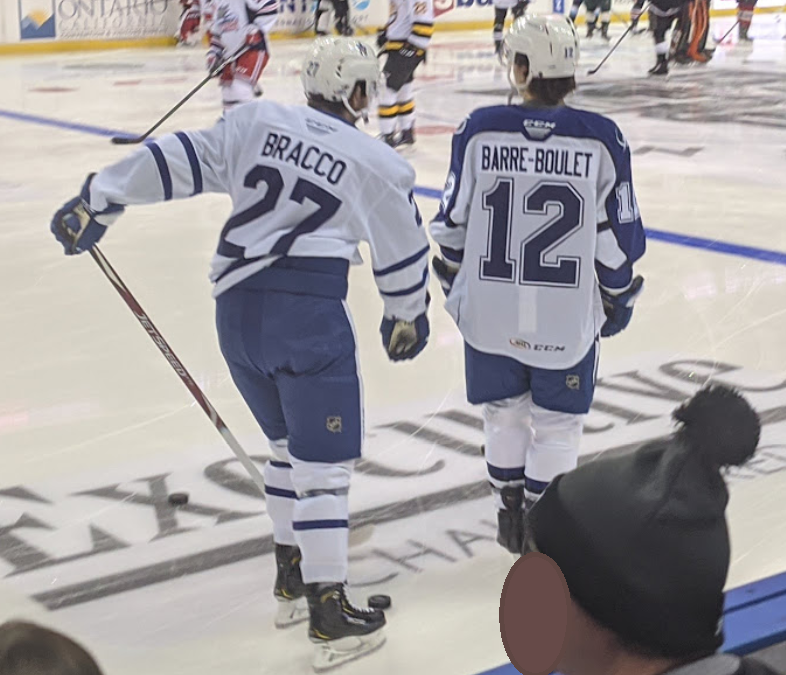 Jeremy Bracco and Alex Barre-Boulet have a conversation during warm-ups prior to the All-Star Skills Competition, January 26, 2020.

By far, the coolest thing that happened during warm-ups was this. (Yes, another blanked-out minor.) 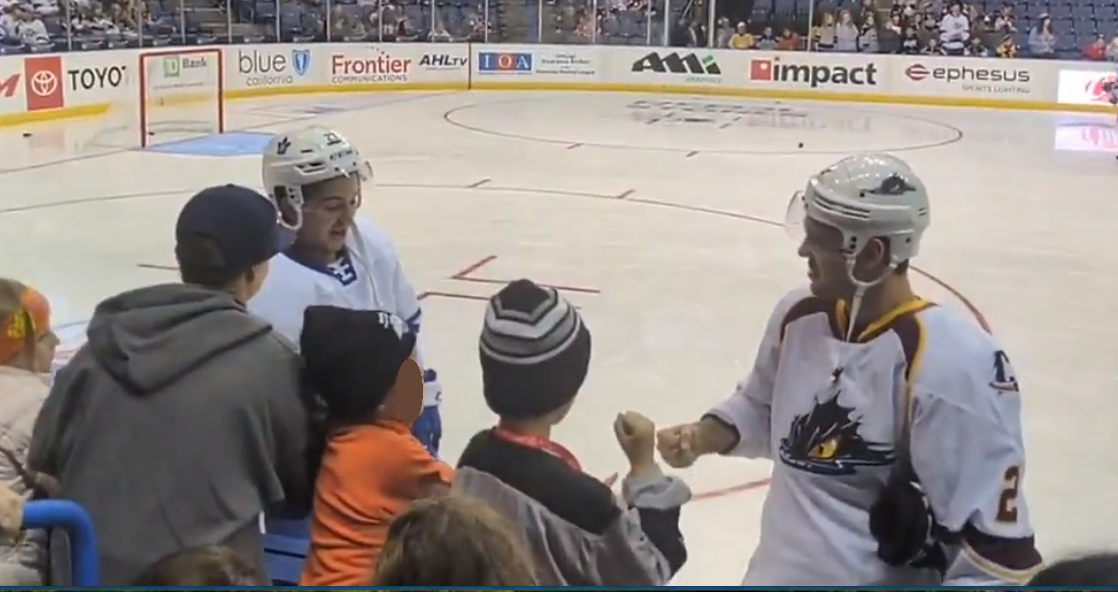 Jeremy Bracco and Adam Clendening talk with young fans during warm-ups prior to the AHL All-Stars Skills Competition, January 26, 2020.

No, Adam Clendening of the Cleveland Monsters is not threatening to beat up a kid while Bracco looks on. In fact, Clendening and Bracco are playing rock-paper-scissors with the kids. They lost, and each ended up forfeiting a signed stick to the tiny pirates adorable kids.

A Moment of Silence

After the player introductions and before the national anthems, there was a moment of silence for the victims of the helicopter crash in Calabasas today, including Kobe Bryant, and his daughter, Gianna. The tragedy was a topic that was on everyone's minds, particularly since this is Lakers country, and it was good to acknowledge it.

In the arena, we got to see what was being broadcast on AHL Live, the NHL Network, and TSN. If you watched that feed, you saw "the view outside Toyota Arena" on at least three occasions, showing a beautiful coastline (I'm guessing it was Malibu), a clear view of the lights of downtown LA and some light traffic at twilight, and the Santa Monica pier. Just so you know, most of us in the building were laughing very hard at those shots.

They not quite filthy lies--those views DO exist in Southern California. You only have to drive, at minimum, an hour to see them from Toyota Arena. Also, this evening was foggy, so even if those views were available right outside the arena, you wouldn't have been able to see them.

Map showing the location of Toyota Arena (red star) in relation to Malibu, the Santa Monica Pier, and downtown Los Angeles (orange circles, in order from west to east)..

The All-Star Skills Competition was broken up into seven categories. Honestly, for the best stats and accurate information about who won what, it would probably be best to check out the official pages. It was too loud and I was too close to one end of the rink to give an unbiased view. What I can provide are some notes and photos.

The Puck Control Relay was confusingly set up, but I'm not in charge of planning, so I guess it is none of my business. The first two heats were actual relay races, with three players per team; the third and forth heats were single-player races. The East had a minor fumble in the first race, but Alex Barre-Boulet of the Syracuse Crunch made up the time to win. 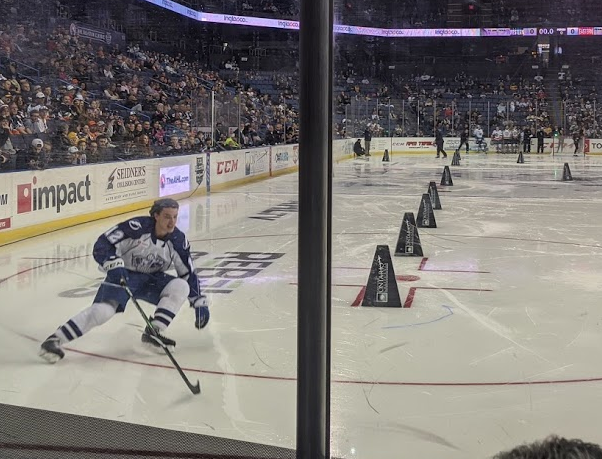 Alex Barre-Boulet skates to retrieve the puck during the puck control relay at the AHL All-Star Skills Competition, January 26, 2020.

My other photos of this event were not great. The West won the second relay heat after someone on the East relay wiped out. The third heat, between T.J. Tynan of the Colorado Eagles and Morgan Frost of the Lehigh Valley Phantoms, was a win for the West. In the fourth heat, Jeremy Bracco beat Kale Clague of the Ontario Reign, so the event was split 50/50.

It was fun to watch guys skate very fast, but no new records were set, and no amazing photos were taken. Alex Formenton of the Belleville Senators won with a time of 13.356 seconds (apparently, the third-fastest AHL record).

Two shooters from opposite corners 21 feet away take turns shooting at a goalie. They get five pucks apiece. I felt sorry for the goalies. Here's a photo, taken from 200 feet away through the glass, of Martin Frk (no, that is not a typo--also, remember that name, it's important later) of the Ontario Reign preparing to open fire on Kasimir Kaskisuo. Kaskisuo made 8 saves of 10. 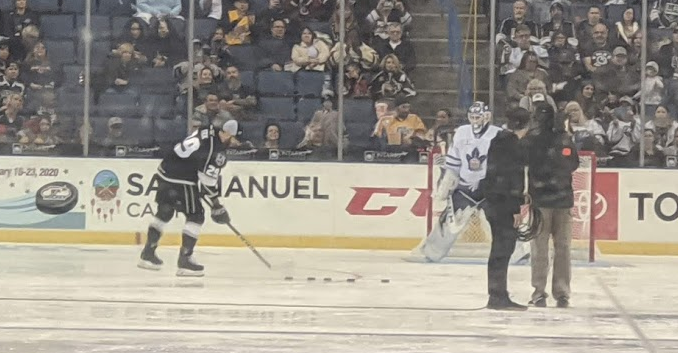 Martin Frk prepares to shoot on Kasimir Kaskisuo in the Rapid Fire event at the AHL All-Star Skills Competition, January 26, 2020.

And here's Timothy Liljegren, preparing to shoot at Anthony Stolarz of the San Diego Gulls. Stolarz also made 8 of 10 saves. 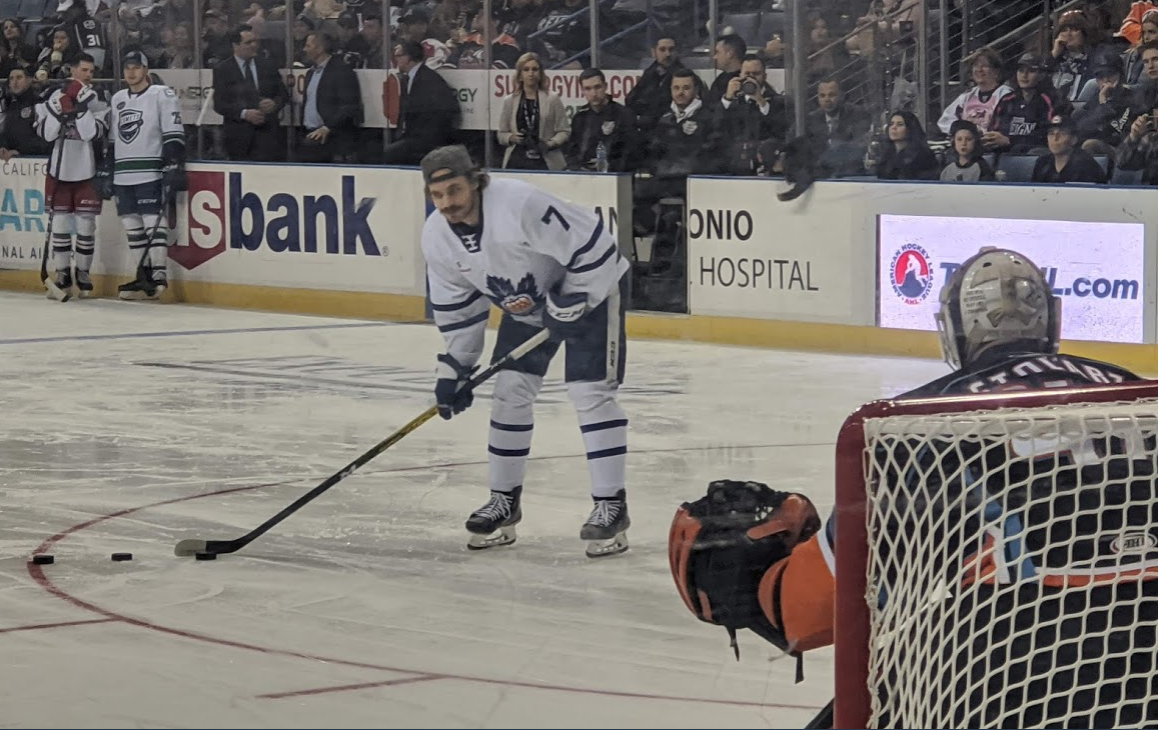 Timothy Liljegren prepares to shoot at Anthony Stolarz in the Rapid Fire event at the AHL All-Star Skills Competition, January 26, 2020.

All of the hardest shot competition was held at the far side of the arena from me, so I watched it on the video board, and got no pictures. However, Martin Frk of the Ontario Reign won the competition (and it should be noted, would also have beaten Shea Weber at the NHL All-Star Game) and set an AHL record with a shot that clocked in at 109.2 miles per hour. His warm-up shot was a respectable 104, too.

Only one other player broke 100 mph--Evan Bouchard of the Bakersfield Condors (100.2 and 103). As I said to my friend "We keep talking about how these shots are 'only' 95 mph, but holy buckets I would be hiding behind the net if someone actually shot one at me at that speed."

The TV camera people kept walking right in front of me as I was trying to take pictures during this event, so what I have is not worth posting. Charles Hudon won the event, hitting 4 targets with 5 shots. (The targets were boring Styrofoam, rather than high-tech screens or exploding targets.)

The official name of this event wins the award for Most Ridiculous in this competition, as it is the "Greater Ontario Convention and Visitors Bureau Pass and Score". They had to use smaller font and ampersands in the program to get it to fit.

Katya referenced this event in a Tweet--three skaters come in on a goalie, all three have to touch the puck, and they try to score as many out of three as possible in the allotted time. It's pretty brutal. Here's a photo of Alex Barre-Boulet, Timothy Liljegren, and Adam Clendening about to shoot on Cal Petersen of the Ontario Reign.

Alex Barre-Boulet, Adam Clendening, and Jeremy Bracco pass the puck in preparation to shoot on Cal Petersen in the Pass and Shoot event at the AHL All-Star Skills Competition, January 26, 2020.

The last event, and the last chance (for the Skills Competition, at least) to make goalies feel bad about themselves and their life choices. Five skaters line up with five pucks, and take turns trying to score a goal--they have to clear the zone before the next skater can go. 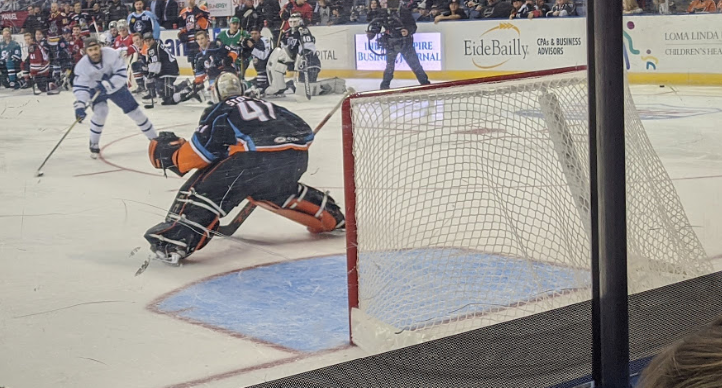 Jeremy Bracco prepares to shoot on Anthony Stolarz during the Breakaway Relay event at the AHL All-Star Skills Competition, January 26, 2020.

So, all in all, an interesting skills competition. We'll see how tomorrow's 3-on-3 tournament goes. I will probably be posting something on Tuesday about it, since it's a later start-time, and unfortunately, I have to work to feed my hockey habit.