After the Fan Fest and Skillz Skills Competition on Sunday, Monday was the day of the AHL Hall of Fame ceremony and the All-Star Classic. I cannot honestly report on the Hall of Fame events, because it was at 11 AM on a Monday, and I have a job.

However, another activity occurred during the day: Matt Moulson (currently of the Hershey Bears, formerly a beloved player for the Ontario Reign), Cameron Gaunce (Syracuse Crunch), Kale Clague, Cal Petersen, and Martin Frk (all of the Ontario Reign) went and visited the Loma Linda University Children's Hospital.

At 5:30, the doors opened for season ticket members, and then at 5:00 for the general public. There was a pretty good crowd (considering the event was on a Monday night), including a large block of seats that were occupied by San Diego Gulls fans. They were a great group, even though they were loudly booed by the Reign faithful.

During warm-ups, the two conferences wore red and blue AHL jerseys (which are being auctioned off). I was unable to move around from my seat for most of the game (people on every side of me), and I was at one end of the rink, so my photos were okay... just okay.

After warm-ups, the Zambonis cleaned the ice, while the "Fanboni" provided entertainment, in the form of dancing AHL mascots.

Note: The "Fanboni" is the Ontario Reign's answer to "How can we give season ticket holders a ride on the Zamboni while still making money off of people who want to ride the Zamboni for special occasions?" The answer: A vehicle that looks like a Zamboni, but is not actually a Zamboni, that can take a slow loop of the ice, then get off of it. Do I sound cynical? Yes. Did I ride it with great glee on my friend's birthday last year? Also yes. 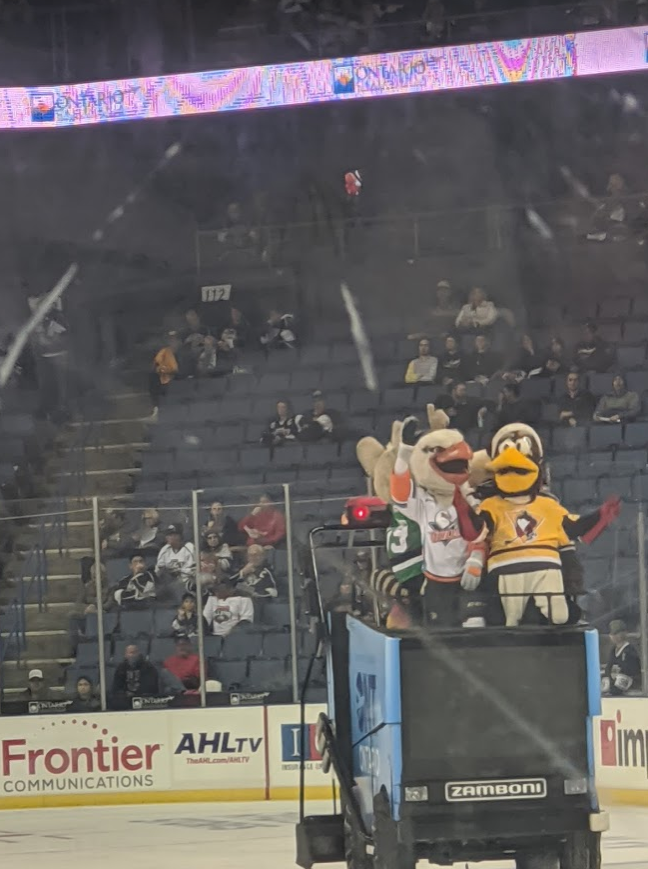 During the player introductions and the national anthems, I had a visitor. Dusty (Tuscan Roadrunners) showed up, stole my notepad and pencil, and gave me an autograph.

Dusty the Roadrunner lounges in the stands during player introductions at the AHL All-Star Classic, January 27,2020. Right: Dusty's autograph, on my notepad.

The All-Star Classic was run as a round-robin tournament of six 10-minute games, followed by a six-minute final. My seat location constrained me to photos from one end of the rink, and there are only so many shots of goalies making saves or failing to make save that I can reasonably expect people to scroll through. So. Here are some notes, and a selection of pictures, when appropriate.

This game was notable for a couple of reasons: First, it set the tone of a LOT of goals being scored. Second, because Cal Petersen (goalie, Ontario Reign) kept the North to two goals (or something--I lost count very quickly) in the first five minutes, but Anthony Stolarz (goalie, San Diego Gulls) let in three unanswered in the second half. Jeremy Bracco scored at least one of those. The Pacific tied it up seconds before the buzzer, so the game went to a shoot-out. Before the shootout, an arena full of homer fans, irritated at Stolarz (and not having realized that precisely none of the players actually cared about this tournament) started chanting "WE WANT CAL, WE WANT CAL." The bench was laughing pretty hard.

Despite his performance in regulation, Stolarz shut the door in the shootout, and the Pacific won the game. 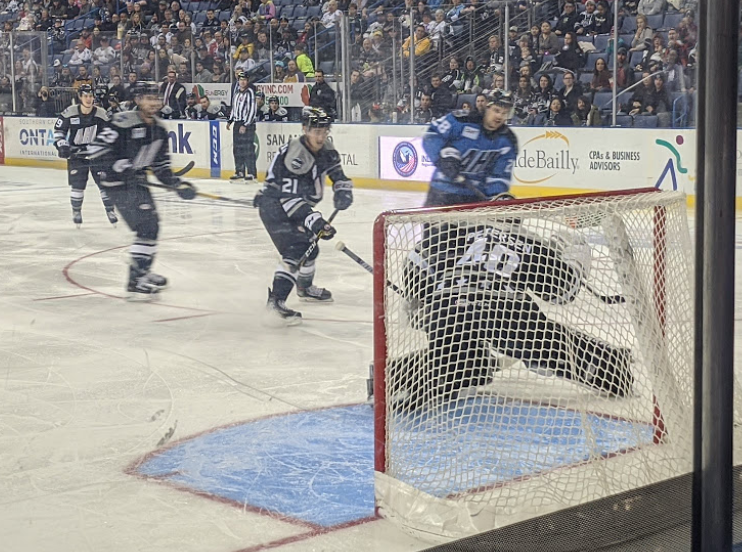 Cal Petersen makes a save on Cameron Gaunce in Game 1 of the round robin.

I'm going to be honest: My memories of this game are overshadowed. At the half-way point of the game, most teams switched goalies. Dave Joseph, PA announcer for the Reign and Kings, got the different teams mixed up, and announced that Kasimir Kaskisuo was taking over in net for the Central Division. Dave is usually so on the ball that it didn't even occur to me that he'd gotten confused--I thought that, somehow, Kaskisuo had gotten suited up for the wrong division, or was playing for both divisions, or something. We finally realized that it was, indeed, Kevin Lankinen (also number 30) in net.

While being puzzled, I did get this photo of Alex Nedeljkovic (eventual tournament MVP--he only let in two goals!). 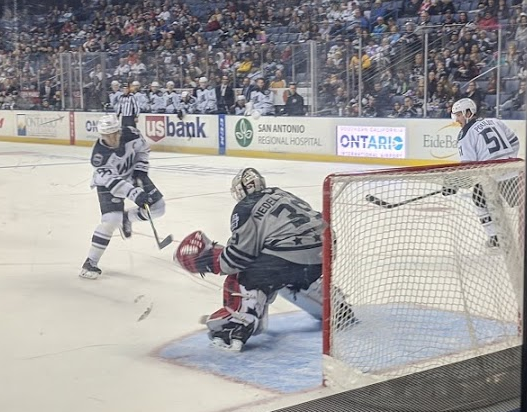 Alex Nedeljkovic (goalie, Charlotte Checkers) makes a save against a player in the Central Division

The mascots came and played a "game". It was amazingly terrible, but notable because Tux of the Wilkes-Barre/Scranton Penguins and Coco of the Hershey Bears either fought or had a terrible collision. I didn't see the impact because of the other notable thing: the outfit that Ringo of the Texas Stars was wearing.

Left: Tux and Coco on the ice, while the rest of the mascots ignore them. Right: Ringo's amazing Look.

Final score -- The kids in the audience won this one. They were thrilled.

The North dug themselves a hole in this one, going down (I think) 0 - 4. Bracco scored a goal and then got an assist less than a minute later to help pull them out. Kaskisuo flopped around like a fish, made a save, but couldn't recover to make the next one. In the end, the North almost caught up, but ran out of time.

Also, Cameron Gaunce was the victim of an experiment to see if any penalties would be called. He had his feet yanked out from under him like the hockey stick was a shepherd's crook. Spoiler: No call.

Left: Jeremy Bracco prepares to score a goal on Kevin Lankinen (the Other Number 30). Right: Kasimir Kaskisuo makes a save... for now.

All I wrote for this game was "Bleh". It was a yawner. The Pacific went down a few goals in the first half, and then ran into Nedeljkovic.

My notes say: "Maybe... the North don't care?" At this point, North Division knew they were out, and weren't putting in a lot of effort. 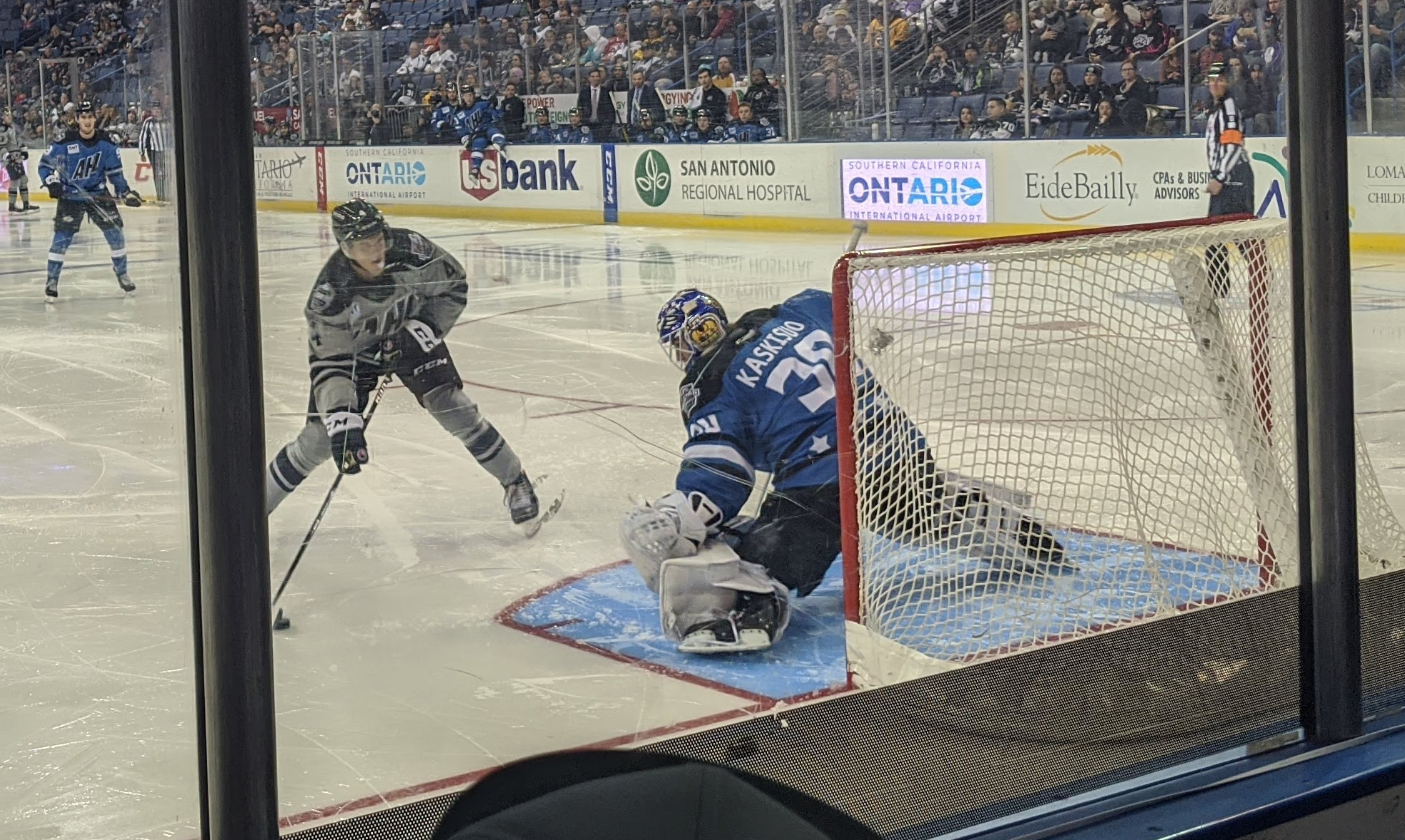 Kasimir Kaskisuo preparing to make a save against an Atlantic player.

I mean, in the photo, it's Schrodinger's Save (I think it ended up being a goal).

Cal Petersen had an insane sequence of saves in the first half of the game--it was like watching a regular Ontario Reign game. He spent about 15 - 20 seconds just making saves and trying to direct rebounds with no support from the skaters.

The Pacific pulled their goalie and managed to tie the game in the dying seconds, heading to another shootout. Stolarz once again came up big, and the Pacific won the game.

The team records were identical (except the North). 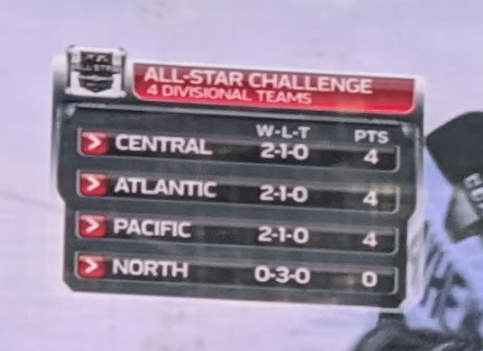 Three teams were tied at the end of the round robin.

So it came down to a tie-breaker--which meant that the Pacific players were done for the evening. Stolarz and Chris Wideman skated over to salute the Gulls section, and Frk, Clague, and Petersen made a brief circle of the rink.

This was the most boring six minutes of 3-on-3 hockey on record. The crowd was taken out of it, though some of us chose to cheer for Matt Moulson. We almost got a goalie-goal, but one of the opposing players actually blocked it because he is an enemy of fun.

Quick digression: For reasons that no one can remember, when the PA announcer says "There is one minute remaining in the period", Ontario Reign fans *always* chorus "THANK YOU" back. I don't know why, but that is the way it is (We don't shout things during anthems--maybe this makes up for it?). Before the team was in the AHL, as an ECHL team, the previous announcer would then answer "You're welcome." When that announcer moved away, the announcers stopped doing that. Dave Joseph has never done it. Last night, during the final, he said "You're welcome", and we all cheered. Because that was a neat call-back to a weird old local tradition, and it didn't cost them anything.

In conclusion: The North division had the best jerseys.