Maple Leafs have cap space to spend, but do they have the assets?

We don’t often think about draft-pick value at the trade deadline, but we should.

Share All sharing options for: Maple Leafs have cap space to spend, but do they have the assets?

Unused cap space is goals you didn’t score and games you didn’t win. You don’t get to bank it up to use next year when you’re more likely to win. You either spend it now or you give the goals to someone else.

Always being a capped out team should be the Maple Leafs plan, not a state to be concerned over. We’re not running a household budget here where we need to save up for a rainy day. It’s raining all the time, and we need all the umbrellas we can afford right now.

Andreas Johnsson is going to be out until the end of the season which is when the salary cap goes away, the players don’t get paid, and everyone is just in it for the love of the game. Cody Ceci is... hurt right now. That’s $7.9 million in cap space that could potentially be empty for the rest of the year. If you understand the “it’s always raining” philosophy of cap management, you want that cap space spent.

Save if for later

However, if it’s always raining, then you actually do need to save for the rainy days of the future because there won’t actually be a convenient period of sunshine for you to rest and recoup.

You can’t recoup cap space anyway, but the trouble with the NHL is that there’s two currencies. The one we tend to obsess over the most, cap space, magically resets every July 1. It’s actually the least bothersome, and you can spend it wisely or not, efficiently or not, and you can get yourself into binds signing players to long-term deals when they’re already Jake Muzzin’s age, but getting out of those deals is possible. You just have to use the other kind of money to buy your way out.

Draft picks, and by extension the players they turn into, are the other currency. And they appear to regenerate every summer too, except they don’t at all. They’re doled out like a pension or a stipend, and they vanish when you spend them. You can’t manufacture picks out of nothing... okay, that Roman Polak and Nick Spaling trade Lou pulled off was damn near money for nothing. But those picks/prospects were traded, leaving the Leafs with a chunk of Frederik Andersen and Jake Muzzin to show for it. It’s easy to forget that price was paid a few years later when all you’re looking at is the cap hit of a player you might not be that fond of.

I saw someone refer to Kasperi Kapanen as the last vestige of the Phil Kessel trade on the Leafs, and I thought, “But what about Freddie’s left leg, eh?” He’d be pretty useless without it, and we only have it because of a pick acquired in the Kessel trade. And his right leg is there because of that Polak/Spaling deal. Also a useful part. But that pick is gone, and so is Sean Durzi, given up for Muzzin. And we aren’t likely to get them back. Teams that are good enough to be capped out don’t trade their expiring UFAs very often. It’s draft picks we really need to save for later. Because it’s always raining, and we’ll need umbrellas next year and five years from now. too.

Currently in the umbrella stand

There are some conditions on those picks, but I don’t care because a second or a third is all the same when the rain’s coming down and you need a guy to play six minutes on the fourth line.

The guys who’ve been drafted with previous year’s picks are more troublesome to value. We can imagine the unused picks will all turn out to be solid umbrellas that won’t flip inside out in the wind or leak copiously. The prospects all look a little flawed.

Neither of these lists make me feel like we should all join hands and scream “we’re rich!!!” We’re not exactly broke, either, but most of those unspent picks are going to end up adding to item 5, or even 3 or 4 on the list, so what exactly are we holding onto them for?

The prevailing nerd-approved theory of NHL draft picks involves holding two seemingly contradictory thoughts at the same time. Nothing outside the top x of any draft is worth much more than anything else in rounds two through seven, so even a late first-rounder is barely worth anything. Therefore you should have lots of picks, as many as you can amass.

x in that formula varies from nerd to nerd and from draft year to year.

Remember that the point of all this asset spending the Leafs are presumably contemplating right now is to make the future first-round picks so low in value that we might as well stop pretending that “first-round” qualifier means anything. We need to take a deep breath and redo that list as: 22 picks spread over the next three years, which is one more than you start with.

The reason the theory says the picks are all nearly equally worthless is that very, very few players drafted ever amount to a meaningful NHL player. A lot of draft pick valuations use really low cutoffs of 50 or 100 NHL games played, and who cares if some guy plays 300 games at Frederik Gauthier minutes? There’s dozens and dozens of those guys around all the time. The number of goals above replacement you get out of your average stack of 22 draft picks is... well, I don’t know, but someone should figure it out that way.

If you want to see a chart of draft pick values, here, pick one: 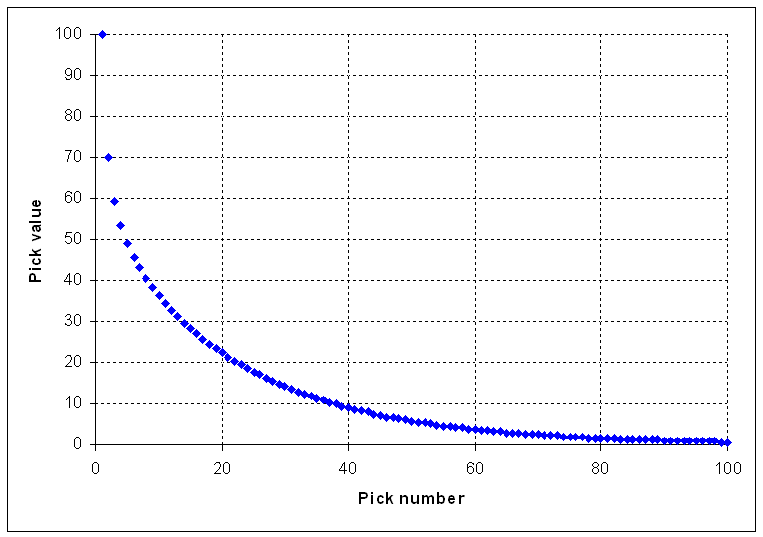 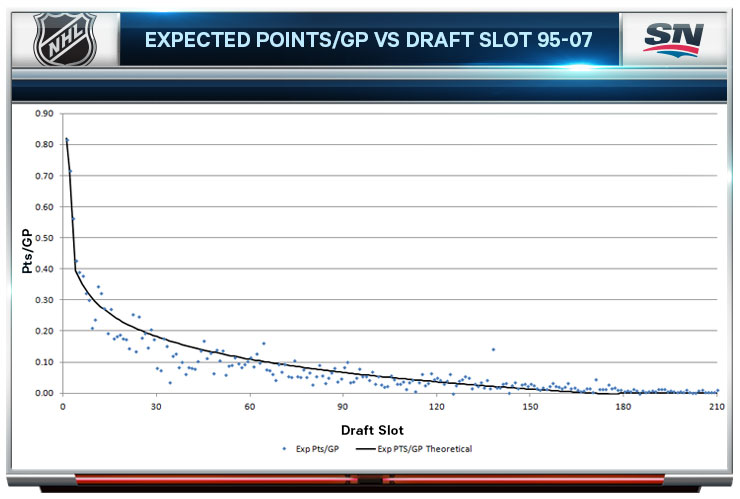 They all look the same.

The reason you want lots and lots of these virtually worthless assets is that the more you have the more your total probability of getting lucky just once goes up.

Many fans, GMs, and scouts believe that their team has the secret to drafting better than everyone else. This then becomes an argument similar to the shot quantity vs quality argument. If you shoot better, you can get away with shooting less, and if you can’t shoot very well, but you do it a lot, you’re still good. If you do both really well, you will own the world.

The truth is that the evidence for better drafting in later rounds is pretty thin, and no one has produced a reliable long-term record of finding hidden gems who grow up to be Andreas Johnsson or Pierre Engvall. More is safer and better, and if you are really good at drafting, that’s just more better. Or something.

But the theory says the round is almost entirely irrelevant. And yet the fixation on “first-rounder” is so deeply held, that even people old enough to remember when that was 12 guys still think Pittsburgh’s first-round pick that they traded for Jason Zucker is going to be worth more than Detroit’s second rounder. It’s a tough belief to shake.

It’s very hard not to make fun of trading a second-round pick for someone you think should have cost a fifth-rounder, and it’s way too easy to believe every second-round pick is Nick Robertson and every late first is Rasmus Sandin.

The power of belief

You know who has the intestinal fortitude, spinal sufficiency and other anatomical metaphors to believe hard in theories like this? I think you do. If any GM is willing to go into the draft with a fistful of late round picks believing they’re as good as firsts and seconds, it’s Kyle Dubas.

Let’s buck up and be as brave as Kyle. The Leafs have two second-round and two first-round picks over the next three years that other GMs might think are worth more than we do. Those are exactly the sorts of things you should sell. The only real reason to keep them is to get yourself out of a nasty contract mistake like the Marleau deal. Otherwise, if a player like Muzzin or Jack Campell is available, buy them! Do it now, while the cap space is there and this nerdy theory hasn’t caught on everywhere yet. This is, for real, a market inefficiency.

Failing to exploit those gets you ostracized from the nerd parties at the GM meetings. (These are very small gatherings.)

The nasty reality in the way of this pretty theory is tagging space. To review for those of you who didn’t read the Muzzin extension article, this is a complex calculation that applies to adding multi-year SPCs from now to March 1, when the space goes up a little. The CBA requires a certain amount of cap space now to account for the future cap hit of the contract to be added, irrespective of there being enough LTIR pool to absorb this year’s cap hit.

No, I don’t exactly get it either. Suffice it to say the Leafs have very little tagging space, so there is now a conflict between Dubas’s stated desire to only add players with term and his ability to use this unexpected cap space mostly for rentals. He might be able to add a modestly valuable player with term, but not some multi-million-dollar superstar.

What does Kyle Dubas do when his ideology conflicts with real-world conditions?

You know, I have no idea. I don’t think we’ve seen an event like this beyond some contract negotiations where Dubas seems to have valued getting the guy out there to score goals and win games now over his future cap space needs.

Assuming Dubas sees the situation in this bold way, and believes that spending the firsts and seconds is smarter than keeping them, will he do it if the only thing he can buy is a rental? Or might he wait on that, given the Leafs precarious position in the standings, and spend in the summer when reality suits him more?

Either way, it seems clear that the Leafs must spend something to build up their defence. Now or in June, it’s still going to cost assets or actual NHL roster players. Capped out teams usually can’t afford very many expensive UFAs, and I think the Leafs are going for the bargain version with a Muzzin extension.

The smart move is to not overvalue those draft picks, but to still keep enough to play the market in hopes of striking it big someday on another Johnsson or Engvall.

So the question is: Will Dubas make a trade in the next seven days or not?

Will there be a meaningful trade this week? Swapping AHLers doesn’t count.