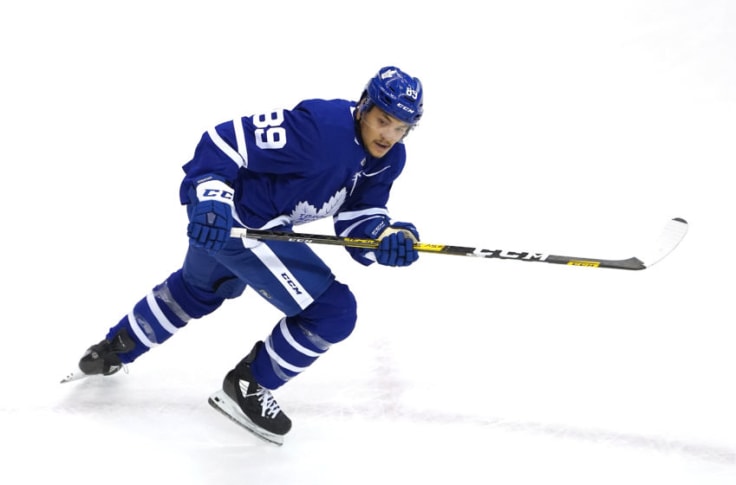 I came across a tweet a few weeks ago (that I cannot find now) about how letting the contracts of your players on ELCs slide is not always the smart move. It makes sense. The more the contract slides, the closer the player gets to playing near his peak in that last year of the contract. The idea is that if you play the player and burn a year off earlier right now, your long-term savings might be worth it even if you lost a year of their ELC right now. For the 20-21 NHL season, the games played requirement for burning a year is 7 - down from 10 in normal years. Nick Robertson has played 6 games so far. He is 1 game away from burning that first year of his contract. With him being a healthy scratch today, I thought to dive into whether or not it'd even make sense to let his contract slide.

There's lots of factors that a team needs to consider when thinking about sitting a player so his contract does not slide. These factors include whether they're going for the cup right now, whether they'll still be competing in a couple of years, what OTHER contracts they have that are expiring in the next couple of years, and how much the salary cap will increase in the coming years. More recently, I'd argue the salary cap is one of the most important factors, with it projected to stay stagnant for at least next season. A secondary but important factor is if this player is part of the core. Robertson is still only 19, but I think most of Leafs nation sees him as being a part of the future core.


The Leafs are definitely going for the Cup right now. Does this affect whether or not to sit Robertson? No. The reason being is that their regular season does not really matter much in their aspirations for the cup. The path to the conference finals is always gonna be against Canadian teams this year. If they think Robertson provides enough value in the lineup, they can safely sit him right now and simply play him in the playoffs and it will not count towards his ELC, just like he played last year against CBJ. In this sense, it seems smart to sit Robertson right now, as he can be used in the playoffs either way.

The next question, will the Leafs be competing in a couple of years? With most of the same core, the answer should overwhelmingly be yes. How does this affect sitting Robertson? Sitting Robertson right now means his contract slides, so they have him at 822k for 21-22, 22-23, and 23-24 season. This seems very good for Toronto, considering their big guns get paid a lot. It's super important to have valuable players on ELCs for the Leafs. And by the third year of his ELC, in 23-24, Robertson will probably be much better than the cost of his 822k cap hit. Again, it seems to make sense to sit Robertson for the rest of this regular season.


Another important question is, what major contracts do the Leafs have expiring in the coming years? Let us suppose that Robertson's contract slides, so the last year of his ELC is 23-24. Since he has a late birthday, he'll be 23 going into that summer as an RFA. Guess who else's contract is up in 2024 summer? Matthews, Nylander, Muzzin, and Brodie. If Robertson eventually breaks out, whether that's next year, in 22-23, or 23-24, it's gonna be 4 big UFAs, and 1 good RFA (probably not at the same level as Nylander, Marner, or Matthews were). Admittedly, Muzzin and Brodie will probably be in decline by then and the Leafs will be looking to bring in younger/new guys to replace them. I'm not as concerned about re-signing them as I am about replacing their value. But having to deal with their replacements AND re-signing Matthews and Nylander will be hard enough without adding Robertson to the mix. Of course, it depends a lot on how good Robertson ends up being, but I think we all expect him to be quite good by the end of 23-24. So, for this point, I think it'd actually not be a bad idea to burn one year of his contract this year, have him become an RFA at the end of 22-23, try to lock him in at a lower cap hit, and hope he continues to improve.


The other positive side of locking him in at the end of 22-23 is that the overall salary cap will likely not be too high, and possibly still the same as the current season ($81.5M). 21-22 seems all but guaranteed that it will stay at $81.5. Once economies start rebounding from the pandemic, I think its likely we see a higher salary cap for 22-23, and subsequent years. If Robertson is slated to become an RFA at the end of 22-23 (i.e. they play him one more game this season and burn a year), then his contract would likely be based on the projections for the 23-24 cap. If they let him slide, his contract would be based on projections for the 24-25 cap (similar to Matthews and Nylander). The NHL said that it did not expect the salary cap to rise much in the next few years, but with the pandemic keeping the cap low, it wouldn't be a bad idea to want him to become an RFA earlier, and lock him in under a lower salary cap. Robertson's contract demand power increases if the cap is $88M for 24-25 vs $85M for 23-24. These are just random numbers, but you get the idea. Combine the fact that he will have less games, less points, and be further from hitting his peak, and there's a good chance you get to lock in a top-6 player for good money. Of course there's also the factor of him/his agent not possibly not wanting a long-term deal if they think Robertson has more to prove, but as we've seen in this league, security is often valued over "proving" yourself. The Leafs goal should be to offer that security in the hopes that he continues to improve and provide value. Similar to what they did with Kadri, Rielly, and Hyman. All players whose contracts werent immediately loved, but turned out to be really good.

The other point that needs to be considered if they do burn a year of his contract this year is, what free agents the Leafs have coming up. They have Hyman this summer, Rielly, Sandin, Liljegren, and Mikheyev next summer, and then Robertson, Holl, and Kerfoot after that 22-23 season. I know I'd much rather deal with Robertson, Holl, and Kerfoot in one summer, rather than Matthews, Nylander, and Robertson. Another point in favour of playing Robertson one more game this season!


The last thing I wanted to discuss is how potentially amazing it can be to have a player become an RFA earlier, sign them long-term, and then watch them become even better. I don't have the time to look thru every contract, but just looking at some of the best and worst contracts in the league, its evident that the best ones were those RFAs who signed before breaking out, and the worst are the older UFAs who signed huge contracts after their prime. Here are two articles that evaluate the best and worst
https://theathletic.com/2153756/2020/11/04/nhl-worst-contracts-2020/
https://theathletic.com/2152892/2020/11/03/nhl-best-contracts-2020/

Among the best contracts: Pastrnak, Mackinnon, Shea Theodore, Draisaitl, Guentzel. All players that were RFAs and signed long-term when they were good, but not elite yet. Matthews and McDavid are also there even though they make much more, and they also seem to be getting better so their contracts still look good. Other players that come to mind are Barkov, Huberdeau, Couturier, and Ehlers.

I don't think Robertson will end up being as good as any of the players above, but some other very good players that also signed decent contracts and got better: Teravainen, Konecny, Filip Forsberg, Timo Meier, McAvoy. We could hope Robertson pans out like one of them.
I won't deny there's players at the other end of the spectrum - ones who signed huge deals as RFAs and didn't pan out. Matheson, Morrisey, Ryan Johansen, Jacob Trouba, Brady Skjei come to mind. But I think the risk is worth the reward, and it seems like there are more players off RFA contracts that provide surplus value rather than not. Similarly, most bad contracts are from UFAs, and UFAs are less likely to provide surplus value.


In conclusion, I don't think it's the worst idea to play Robertson 1 more game this season and burn a year of his contract. In fact, it might even end up being beneficial if it saves them $1-2M/year on his next contract. I'm sure the Leafs front office has made all these considerations, but I definitely wouldn't be surprised to see either of the situations play out. Maybe they do intend to play him 1 more game, but they just sat him today to give Brooks a shot. I don't know! But we will know soon, if he continues being scratched the rest of the regular season, that they don't wanna burn a year of his contract.

What do you think is the smarter move?