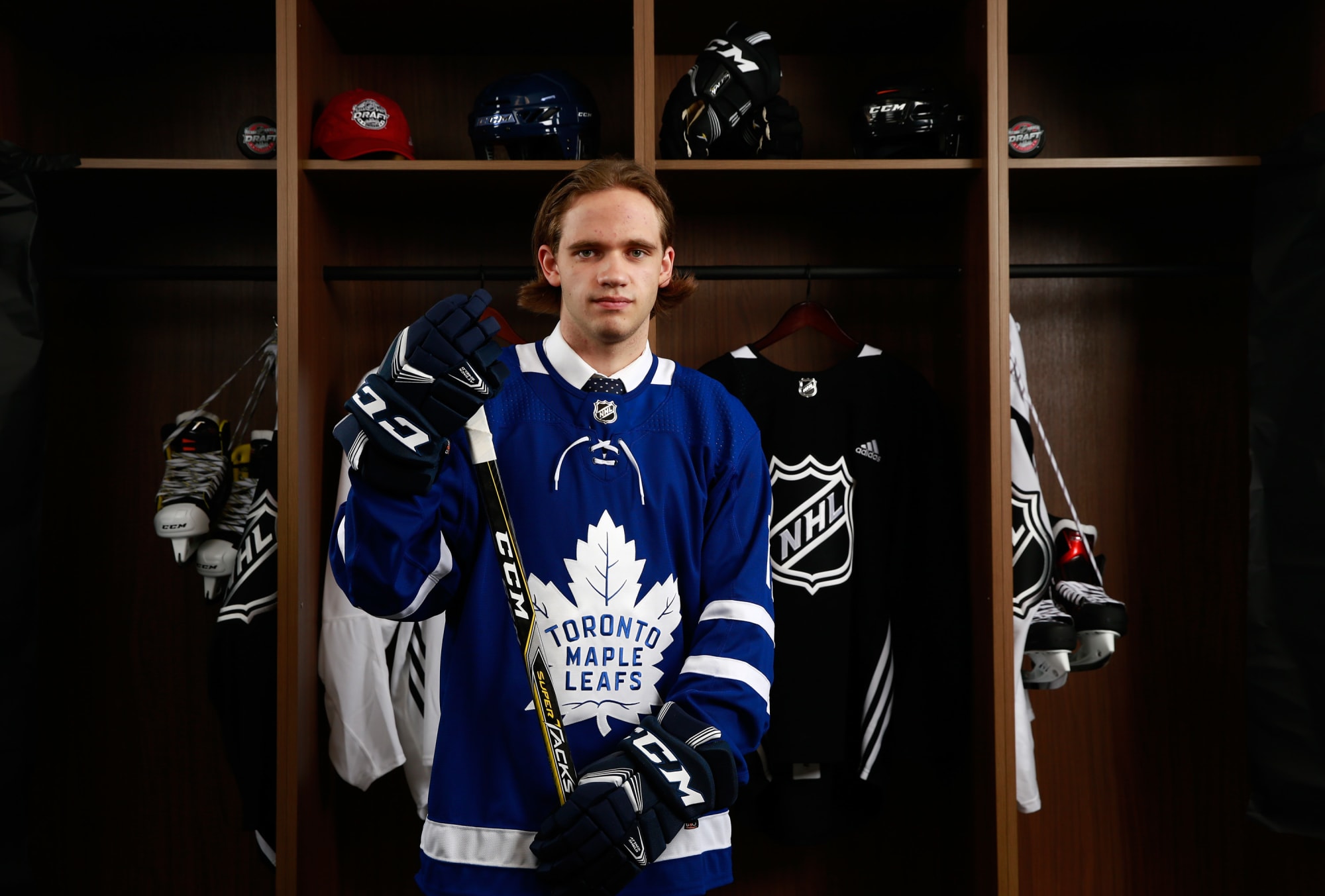 I am a fan of the Sham Sharron method of prospect analysis. While it is true that numbers never tell the whole story, I find it sobering to get numbers together and take a look at a prospect's production before getting granular and letting hope and narrative imbue them with significance. This especially in the 2020-21 season, when a lot of players moved around a lot and when the AHL season was truncated and weird.

So a quick and dirty look at Leafs' prospects' production. That is what this is.

Note that I am not an analyst of any description and you should not take these numbers without skepticism. These are only a launching point for discussion. The boxcars come from Elite Prospects, which I have summed for convenience, and the NHLe coefficients I am using come from Patrick Bacon (@TopDownHockey). You can view them and his calculations on his Tableau. In some cases our numbers differ. This because I have tried to include production from players who played significant time in various leagues, while he has not. For example, his NHLe for Mikko Kokkonen is only for his AHL time, while I have tried to factor in his Liiga production.

For each player, I have included not just the date they were drafted but their "year," expressed in how many years it's been since the draft for which they were first eligible. The Leafs have shown a fondness for overagers, so while prospects like Axel Rindell or Nick Abruzzese are relatively new to us, it helps to frame their output in terms of their real ages rather than the year the Leafs happened to draft them.

You can see why the Leafs tendered a QO to Malgin, whose D+6 production in the Swiss league was pretty good. He could be depth scoring forward, and I would expect him to challenge for a bottom-six position on the Leafs out of camp, although he's more likely to be a top-six forward for the Marlies or get claimed on waivers.

Popular prospects like SDA, Rodion Amirov, and Roni Hirvonen grade out fine. I expected Nicholas Robertson to look a lot worse given how injury-plagued he seemed this season. Abramov's low NHLe is an expression of how easy it is to score in the QMJHL.

Pontus Holmberg's statistical profile is also intriguing. The Thommie Bergman special, although he seems like a far cry from Andreas Johnsson. His D+4 season is more comparable to Pierre Engvall's D+4—when Engvall had 20 points in 31 games for the SHL's HV71 in the 2017-2018 season. This should maybe give you an idea of how Holmberg projects: bottom-six winger whose points will be secondary to how he drives play.

Pavel Gogolev and Alex Steeves, this year's college free agent signing, looks like players to watch in the next, full AHL season.

Nick Abruzzese's numbers impress, although it's tough to gauge what a lost year of play will do to his development as a player.

Brennan Menell's NHLe is so shocking that I triple-checked to make sure I didn't goof something up. He scored a lot, and the KHL is harder to score in than you think it is. Worst case scenario, the Leafs got TJ Brennan for literally nothing. Best case scenario? Oh baby.

It's comforting to see Timothy Liljegren at the top of the heap here. He seems like a player who needs to break through soon or he's a bust, but defensemen like Mattias Ekholm became real players despite not breaking onto the roster until their D+5 seasons. I have hope he'll become something, even if he's not what I was hoping for when he fell to us at 17th overall.

Mikko Kokkonen's NHLe is higher than I expected, buoyed by a productive if brief stint in the AHL. NHLe-based prospect forecasting models seem to recommend him, even if I wasn't a fan of his game at the World Juniors. This unlike Topi Niemela, who impressed a lot of people this past year, especially at the World Juniors, but whose numbers here are a lot lower than I was anticipating. I have to imagine that his injury and the way his role changed before and after the World Juniors is part of why his production doesn't quite match his hype. His rapid development should still excite Leafs fans, and I'm really rooting for him going forward.

Happy to see Filip Kral and Mac Hollowell so high up as well. Kral scored 21 points in 48 games in the Czech league, and like the KHL, it's harder to score there than you might think.

If you're curious, Travis Dermott had 2 goals and 4 assists. His 6 points would have been 9.6 in a full 82-game season.

Akhtiamov's numbers recommend him, but he's young and goalie development is fickle and takes a long time. Jack Campbell was widely written off as a bust before becoming a rock for the Leafs this year. In sum, I don't know what any of this is and I'm scared.

It's become fashionable to blame Mark Hunter for the Leafs' bum drafts in the Shanahan era, and those charges are legitimate. It is stunning how bare of promise the 2016 and 2017 drafts look from the present, and it's not difficult to fathom how much better off the Leafs would be if even one or two picks from those drafts were challenging for real minutes in the coming season. Instead, it's Adam Brooks trying to make it on the 4th line, and a lot of nothing.

At the time, the Leafs made a lot of picks that online hockey stats people greeted with skepticism and disapproval. Fans (like myself), optimistic about their public investment in analytics, reasoned that the Leafs must know something internally that we don't, and hindsight makes fools of us all, or at least of me. Whatever committee it was that drafted like this, it failed, and I hope the Leafs have learned from that.

It's worth noting that since Hunter's departure, the Leafs have shown greater affinity for skilled players or players whose hockey sense helps them outplay whatever deficiencies they have that led them to fall to later rounds. They have been size-agnostic to the point of parody, and they like players with funky development paths, especially players who can play against adults in the AHL, KHL, or SHL instead of marinating in the CHL. Yet some drafting trends from the Hunter era remain, upsetting this Dubas/Hunter dichotomy that can be comforting even when it's not true. Under Dubas, the Leafs have still shown a propensity for obscure Russian players, overagers, and USHL and NCAA players. Years ago, I feel like the USHL love in particular would've been panned as suboptimal, so it's interesting to see the Leafs with so many USHL players in their portfolio.

Easy answers for next season? Who knows. Probably not. But reasons for optimism? Certainly. The Leafs' farm system is not as fallow as you might think, even if it's not harvest time.