The Maple Leafs' ECHL affiliate kicked-off their first ever road-trip to the GTA with a practice at MasterCard Centre.

Share All sharing options for: Orlando Solar Bears in Toronto for 3 game series

This weekend the Orlando Solar Bears will make their first ever trip to the Greater Toronto Area to play a three-game series against the Brampton Beast. The Beast are a former member of the Central Hockey League, which merged into the East Coast Hockey League for the 2014-15 season. The merger required a modified schedule for that season which meant the Solar Bears never played them.

This series will be the first ever time these two teams have squared off.

Bolstering the Solar Bears' spirits was a stellar performance last weekend where they picked up two big wins against the Manchester Monarchs, one of the best teams in the ECHL. Solar Bears' goaltender Rob Madore believes an important shift is that the team "has figured out how to battle through to the end of games," noting their win on Sunday included two goals late in the third period to tie the game, and eventually force a shootout. 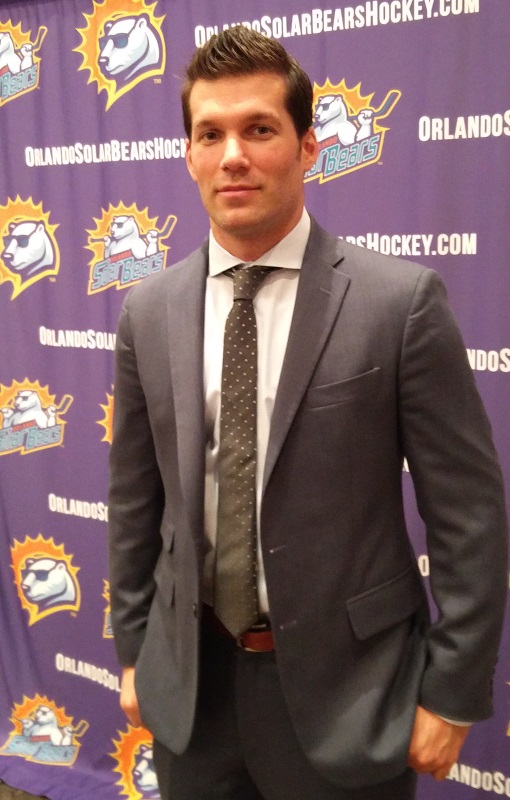 Solar Bears' coach Anthony Noreen agrees, adding "It was a big weekend for us, especially inside our locker room. I think our guys learned a big lesson on Sunday as far as team work, and it paid off in the game. I think it will be something that really benefits us moving forward as a young team."

The Solar Bears are presently last in their division, but that's not as bad as it sounds. The ECHL has two conferences, each split in three divisions. Playoff births are awarded to the top team in each division, then the next five points-leaders in each conference. The Solar Bears have a points total high enough that they are still in contention.

When asked about preparing for a series against a team he has never faced before Noreen believes consistency is most important for his team.

"Our big thing this weekend is to focus on ourselves and make sure we're sharp at what we do. I think there's a couple little things; special teams, some adjustments on face-offs we're aware of; but right now we want to make sure our player development keeps going in a positive direction."

Noreen clearly views that approach as critical to success.

"Keep moving forward developing these guys as pros, as people, as hockey players. We feel like as we keep doing that, and we keep building together as a team, we'll be playing our best hockey."

The Solar Bears took advantage of their time in the GTA to have a practice with Maple Leafs' Skill Development Consultant, Mike Ellis, spending over two hours running drills on the ice.

"For me it was great to get another voice out there reemphasizing the things we talk about every day," Noreen said, explaining it was a part of the holistic development strategy of MLSE.

"There's not going to be much difference in the style of play between The Leafs and The Mariles and us. We're all under the same basic structure and philosophy," Noreen said. Ellis will continue to work with The Solar Bears while they are here. "He's going to be out there with us again tomorrow and I think that shows how much care there is in this organization about how guys are developing, from the top to the bottom."

You wouldn't expect any possible rivalry to exist between two teams that have never met before, but there's a new wrinkle to this match-up: The Beast are now affiliated with the Montreal Canadiens. To acknowledge the significance of the historic Maple Leafs and Canadiens rivalry both teams will wear special jerseys for the series.

The Solar Bears unveiled theirs yesterday. It combines elements of The Maple Leafs jerseys with the Solar Bears logo, which features team mascot Shades, Carlton's much more chill cousin. 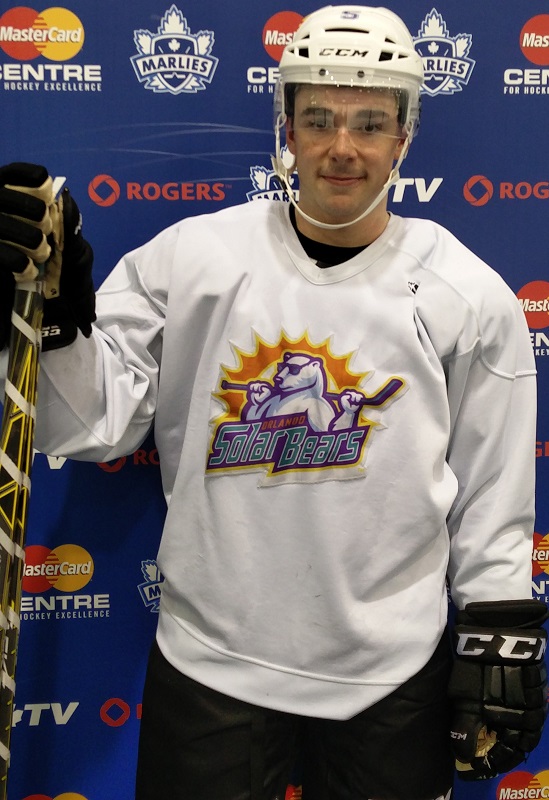 For Orangeville native Erik Bradford this series is also significant for personal reasons.

"I grew up playing at the Powerade Centre with the Halton Hurricanes, and played there in the OHL," Bradford said. "It's going to be a pretty special moment for me to play there in front of my friends and family who have supported me all along."

Bradford was not drafted by an NHL team, but was signed to a try-out contract last season and played three games with The Marlies. Now, in his first full pro-hockey season, he has picked up 19 points in 50 games.

Bradford noted the Solar Bears is a great place for him to learn how to be a professional both on and off the ice, "I think the biggest thing for me is to be a sponge; take everything in, learn every day, and enjoy the process."

Bradford thinks the victories over the Monarchs has given the team extra confidence, and he is excited to play through the balance of the season.

"We feel if we stick to our game plan and our structure we can beat any team in this league."

The Solar Bears game schedule is as follows (EST):

Tickets can be purchased on The Brampton Beast website.