Get to know the Marlies first round opponent: the Bridgeport Sound Tigers

The Marlies first round playoff opponent is a mystery to Toronto fans. Get to know the team the Marlies meet for the first time ever.

Share All sharing options for: Get to know the Marlies first round opponent: the Bridgeport Sound Tigers

The Marlies travel to Bridgeport, Connecticut for their first two playoff games this weekend, and a quirk of the AHL schedule means they have never played the team that calls that town home. The St. John's Maple Leafs did back in the day, but for most of the Marlies and their staff, it will be a new experience.

In 2010, Yale played an epic against Boston College in the regional final. Down 9-4, Yale scored three goals in the last six minutes of play to come within a hope and a dream of making it to the Frozen Four. Bulldog Mark Arcobello, who already had three points in the game, was in on every one of those goals.

On the other side of the ice were Ben Smith, who was kept to a modest two assists, and Joe Whitney, who had three points. It might not have been as impressive a feat as Arcobello's but they won the game.

Mark Arcobello, who is from Milford, a town so close his family and friends can virtually walk to the game, and Ben Smith, who grew up in nearby Avon, know all about Connecticut hockey. For the rest of us, the Sound Tigers are a mystery.

And that's the first lesson. It doesn't make much sense, but they're the Sound Tigers not the Tigers. And no, sound isn't a type of tiger you've never heard of, it's a reference to the Long Island Sound which separates Bridgeport from Long Island. And that part does make sense, because the Sound Tigers are the farm team of the New York Islanders. Okay, it used to make sense.

The Sound Tigers are a team caught in the middle. They have the Islanders on one side, pushing to unseat the Panthers in the playoffs, and on the other side, their ECHL affiliate is the league dominating Missouri Mavericks who have three wins in three games in their playoffs so far. Both teams have syphoned off players from the Sound Tigers, leaving them a thin squad gearing up to face the Marlies and their seemingly endless bench.

Bridgeport finished the regular season with a record of 40-29-4 for a win percentage of .572, the second lowest of the playoff teams. They played in the tough Atlantic division and finished fifth behind some very powerful teams, so it would be wrong to just take that record at face value.

A deeper look at the players on the team should help to determine how tough an opponent they'll be.

Michael Grabner was traded from the Islanders to the Leafs last year for five prospects, so there may be some familiar faces on the Sound Tigers. Where are they now?

The oft-travelled Taylor Beck, who never actually played a single game in the Toronto organization, was traded by the Islanders to Colorado for Marc-André Cliche. This was a mystifying deal where the Sound Tigers gave up one of their top scorers for an older, less skilled veteran whose major claim to fame is his faceoff percentage.

Carter Verhaeghe has been up and down between the AHL and the ECHL several times this year, and is currently on the roster of the Mavericks.

Tom Nilsson was released by the Islanders and is now the occasional seventh defenceman for Frölunda in Sweden where he's made very little impression.

Matthew Finn has been up and down just like Verhaeghe and is currently on Bridgeport's roster.

Christopher Gibson, the star of the group, has been up and down between the AHL and the NHL and is currently on the roster of the Islanders. He's appeared in four NHL games this year and 42 in the AHL where his save percentage is .909, the same as Antoine Bibeau. His entire stat line is nearly identical to Bibeau's except for the win column.

The rest of the team

The most well known name on the Sound Tigers is Michael Dal Colle, the Islanders 2014 draft pick who went fifth overall. He spent the year in junior hockey with the Kingston Frontenacs and has appeared in just three games since joining the club. He has yet to claim his first pro point.

Another name in the news lately is defenceman Devon Toews, a 2014 fourth round pick who went to the Frozen Four with Quinnipiac and has signed an ELC for next year. He is not slated to join the Sound Tigers unless they are still in action when his school year is over.

The Sound Tigers signed another college player to an ATO, forward Anthony Greco from Ohio State. He is described as small, fast and gritty, but his points totals put him well out of the elite category for college players.

The team's top points man is Bracken Kearns. He is 34, a veteran of years of professional hockey, and he's racked up 23 goals and 30 assists good for 33rd on the AHL scoring list.

Kearns showed up on this graph from December as the lone guy his age in the top 20 in the AHL. 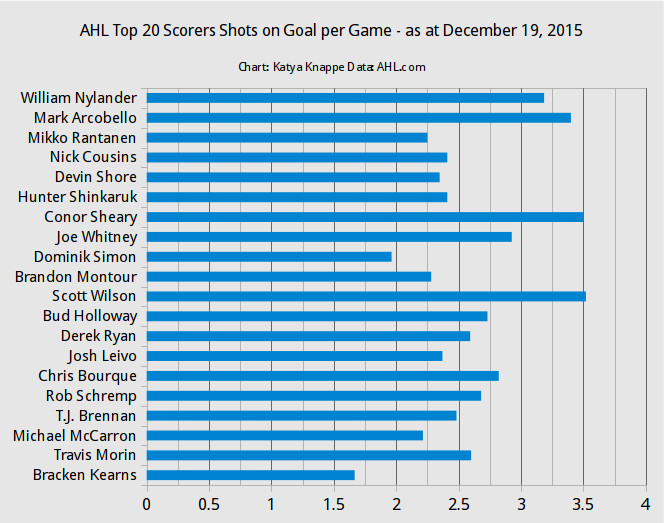 What stands out is his low shot rate compared to the other top scorers.

The next best in Alan Quine, who's been called up to the NHL and has played in all the playoff games so far.

The theme continues with their best scoring defenceman, Ryan Pulock, who is also on the NHL roster and is now reported to be out with an injury for at least the rest of their first round.

Most of the remaining players are multi-year pros like Joe Whitney, new to the team, but not the AHL or Mike Halmo, a younger undrafted player that had a long cup of coffee in the NHL, but didn't stick. Both of these guys are fan favourites and are high on the Sound Tigers scoring list.

The depth in scoring is not encouraging for the Sound Tigers, they have 11 players currently on the roster with more than 15 points, while the Marlies have 23.

The Sound Tigers made the news recently, not for securing a playoff spot, but for an epic line brawl with the Albany Devils.

Ross Johnston for the Sound Tigers was suspended for the first three games of the playoffs.

The Albany Devils took exception to what they saw as a Parker Wotherspoon knee on Nick Lappin late in the second period, sparking one slow-simmering brawl that eventually saw Bridgeport assistant coach Eric Boguniecki and Albany coach Rick Kowalsky separated at the benches.

Referee Ryan Murphy sent the teams off for an early intermission to sort out penalties. Soon after they returned, another skirmish followed when Blake Pietila bowled over Bridgeport goalie Stephon Williams.

Rich Clune has 146 penalty minutes with the Marlies, 62% more than his closest competitor, Sam Carrick with 90. The Sound Tigers have three guys over 100. I think it's safe to say that they play a tougher, harder style of hockey than the Marlies.

If Gibson stays up with the Islanders where he's insurance behind Thomas Greiss and Jean-Francois Berube, the most likely goaltenders will be Stephon Williams, who was the regular backup for the season with a save percentage of .899, and Eamon McAdam, who is a 21-year-old, grass-green rookie who walked out of Penn State a few weeks ago and right onto the hot seat.

The Sound Tigers started McAdam in his first ever pro game on the ice last Sunday, the day after the brawl and the last game of the regular season. They lost the game 6-1 and the prize for losing was the Marlies as the opening round opponent.

This is not forecasting out to be a long series for the Marlies. It might not be easy, in fact, it's likely going to be a bit of a meat grinder, but there's no way they can hold off the Marlies four lines of scoring talent even with Gibson in net.

The only way the Sound Tigers can get a break is if the Florida Panthers provide it. If they beat the Islanders, by the time the Sound Tigers come to Toronto, they could be a beefed up squad with some of their top talent back. Until then, they look like easy pickings.

First game is Saturday in Bridgeport at 7:00 pm.