The Leafs players have some metal to remember Russia, and while the hoped-for future of the team was shut out, he has a lot of bling in his future. The bad news is European hockey is over for another year!

August 16th. That's the day European hockey starts again with the opening day of the Champions Hockey League. Not quite three months. I can do it. I can wait.

With one period to go in the gold medal game of the World Championships, I realized there was only 20 minutes left of European hockey for the season, and it was a bittersweet period of play that saw Canada take the European crown. The IIHF is, at the highest level for men, a European championships where they graciously invite the North American countries to play on their ice at a time that suits them.

In this realm, Canada, the country that Vladimir Putin called the founding father of hockey, is the interloper. We are crass enough to crash the party and take the trophy. But I hope we're gracious enough to say thank you.

Thank you. It was a wonderful time, as always. 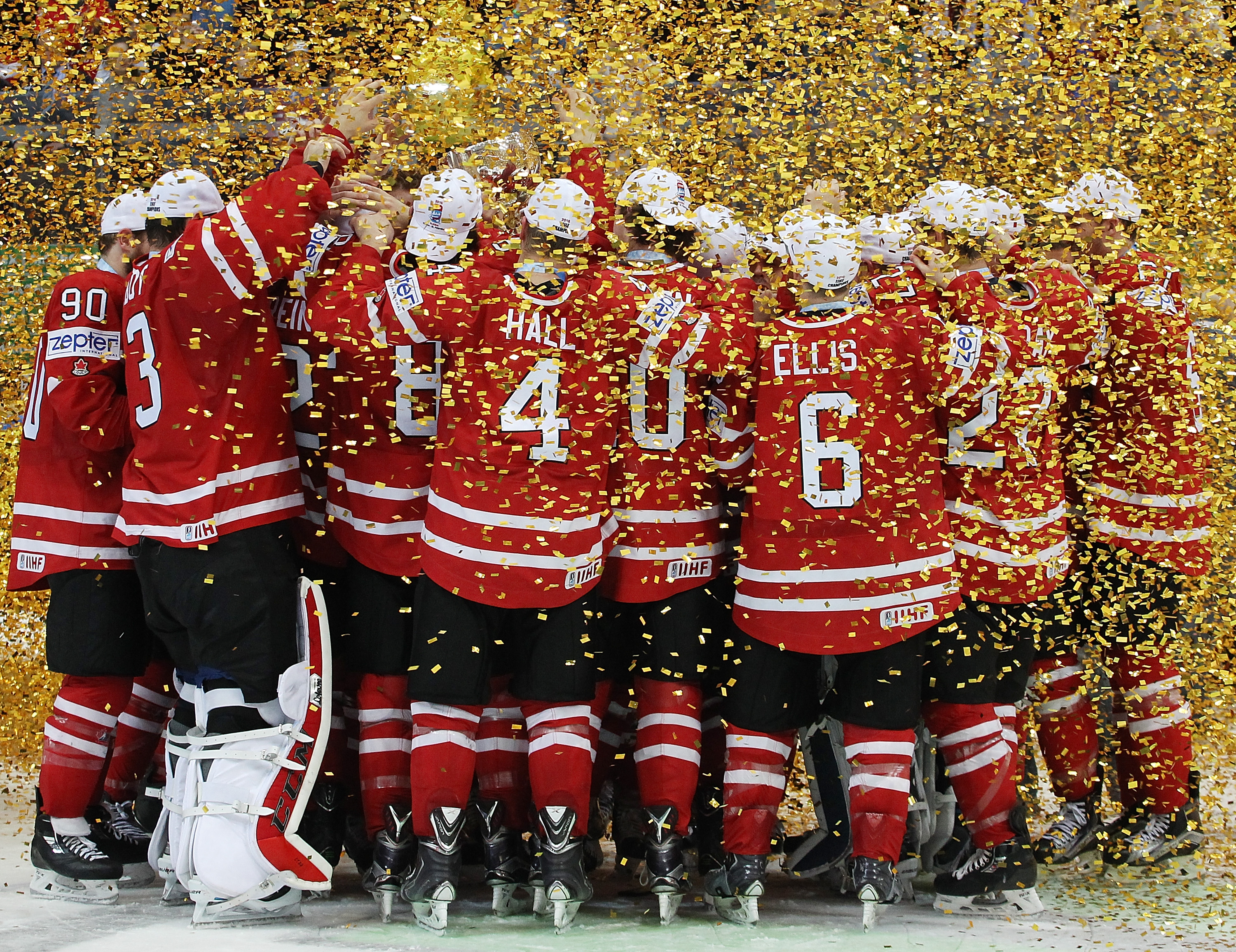 Rielly delivered. He was quietly good, gradually getting stronger and more confident, and he delivered his best game in his last one where he was just absolutely excellent every second. The man who got caught on a pinch by Patrik Laine in Team Canada's only loss was nowhere in sight. Instead there was a work horse—he looked big and he played big—and he played just shy of 26 minutes, more than any other skater on either team.

It is interesting to contemplate that the Team Canada coach, Carolina's Bill Peters, plays a system derived from Mike Babcock's. He adjusts the dial on his defence according to need. The Hurricanes play a much more aggressively offensive defence where Justin Faulk is one of their top scorers, and Babcock's defensive usage in Detroit and Toronto are two different things entirely.

Morgan Rielly took up his role and played it to the hilt, and he was named one of the three best players for Team Canada by Peters and the coaching staff.

Both the IIHF directorate and the media were dazzled by the Florida Panthers Michael Matheson, a defender who started his year in the AHL. The distance he's climbed this year was impressive, but Rielly was still better.

Rielly had only one goal and two assists, but he was the drive train (™ Mike Babcock) of the team, and that's what counts.

No one ever wants the silver medal. Leo Komarov is no exception, and I can't find a picture of him with his medal. He wanted the gold; he wanted to beat Canada like he had beaten the Russians, and he did everything in his power to get it. He even had a scuffle with Brad Marchand. Okay, that might have been for fun.

The Finns are the story of this spring season, winning things all over the place, setting hearts beating with teenage sensations, and this tournament was no different. The name that was made, despite all Russian efforts to eclipse him with the top line of the tournament, was one of those teenagers.

tfw you come to the realization that you aren't going first overall in the draft pic.twitter.com/LNhhukiUM7

But it was Komarov who stole the Finnish show more than once. He had three goals and four assists in 10 games and joked to reporters that he had no time to be an agitator because he's a scorer now. He never looked out of place on the top line of the second best team.

Nikita Zaitsev was my player of team Russia. I thought he was vying with Anton Belov and partner Alexei Marchenko to be the best defender for Russia, but Oleg Znarok never came to see it my way. Not quite. He played Zaitsev more and more, put him back on the top penalty kill unit in the medal round, but he never dislodged the bigger names of Slava Voynov and Alexei Emelin from the top pair. And he had Dmitry Orlov to fit into the lineup too.

The media seemed to agree with me:

Both defenseman Nikita Zaitsev and forward Vadim Shipachyov have been included in the IIHF's All-Star Team! pic.twitter.com/qzXkterd7S

Zaitsev had one goal and four assists, and as an indication of how much good play his teammates were generating with him on the ice: a team leading +12, a stat he shares with Marchenko.

Auston Matthews (USA/Future @MapleLeafs): 6 goals in this tournament, tied for the third-most at World Championships pic.twitter.com/j8TPiCUtXO

Auston Matthews did not win a medal, but he was a big part of the engine that drove the underpowered USA team into fourth place, way ahead of where they "should" have finished.

He had six goals and three assists in his 10 games played, which is his usual, reliable somewhere near a point per game, heavy on the goals production. It's a toss-up between him and the Detroit Red Wings Dylan Larkin for best American player. And when you consider that Larkin has a year in the NHL and a rough and tumble round of the playoffs under his belt, that's another sign that Matthews is someone special.

If he is disappointed over missing out on the medals, he might not have to wait long; speculation is already rife that he'll be named to Team North America for the World Cup when the final rosters come out this week.

Martin Marincin very quietly was one of the best players for Slovakia in a year when they had a strong enough team to cruise to a decent showing in the non-medalling countries, but not much front end power. Often termed the tournament within the tournament, there are a group of teams, not in fear of relegation but out of the top six, who are jockeying mostly for ranking to make the Olympics.

Slovakia has won medals, a gold even—most recently the silver in 2012 when Zdeno Chara was team captain, but usually the luck of the NHL draw keeps their few stars (Chara, Marian Hossa) out of the tournament and ninth is their usual spot of late.

Marincin, paired on the top unit with Andrej Sekera who makes $5.5 million, looked the better of the two at times. He put in big minutes, shot the puck a lot and together they were the reliable backbone of their team.

Their coaching staff picked Marincin, Sekera and defender Dominik Granak as their best players of the tournament.

He finished the tournament with two assists, a number that might reflect more on the quality of the forwards than his own efforts.

It's all over but the signings

The very last gasp of the European season is the signings of the bright shiny stars from the World Championships. There's always a few, and Hungarian goalie Adam Vay was the first. Now attention turns to those exciting Russians.

These geniuses amassed 46 points at the #IIHFWorlds. Best line of the tournament? pic.twitter.com/0O4wkCXQz8

Is there a future Maple Leaf in that picture?