From the Branches: Ovechkin says "give me a break!"; Leafs have 9 losses in 10 games.

The NHL takes a pause for the All-Star Weekend which will kick off tomorrow night in Nashville with the All-Star Fan Fest.

Share All sharing options for: From the Branches: Ovechkin says "give me a break!"; Leafs have 9 losses in 10 games.

Bernier bernier'd last night, letting the puck in the net on one of The Bolts' first shots, and then shutting the door the rest of the game. Unfortunately The Leafs offence couldn't convert, and they lost 1-0, their 9th loss in 10 games. All in for Auston Matthews!

Maple Leafs fall under the sway of Steven Stamkos - Pension Plan Puppets
The Leafs go into the All-Star break not quite last in the league.

Vasilevskiy, Lightning shut out Leafs 1-0 - Raw Charge
Steven Stamkos' power play goal in the first was all the Tampa Bay Lightning needed as goalie Andrei Vasilevskiy turned away all 30 shots he faced in the Lightning's 1-0 win over the Toronto Maple Leafs in Tampa Wednesday night.

Checking in on the Kids: Andrew Nielsen - PPP
m piedlourde checks in on another 2015 Leafs draft pick!

Up for extension: Morgan Rielly - PPP
We turn our attention to one of the Leafs key RFAs this summer

Marlies injury update: Kasperi Kapanen out - PPP
Kapanen didn't make the trip with the team Michigan. Toronto has another game in Grand Rapids on Friday before travelling home to play Binghamton on Saturday.

Easily the most talked about moment from last night will be The Flames' Dennis Wideman cross-checking linesman Don Henderson in the face. Here's the raw video.

Speculation is rampant that the hit he had just taken left him heavily dazed and he thought the linesman was a Predator's player blocking his path to the bench.

A win over the best team in hockey, just as we all expected - Broad Street Hockey
Just as we all knew they would.... HAHAHAHA WHAT?

Predators 2, Flames 1: Hutton Leads Preds To 4th Straight Win - On the Forecheck
The Flames out-shot the Predators 27-24, pressuring the Nashville defense and challenging the Preds' slim lead for most of the game. At times the Flames looked like the better team, but they struggled with bad penalties and turnovers. On that note, the Predators special teams were on point tonight. 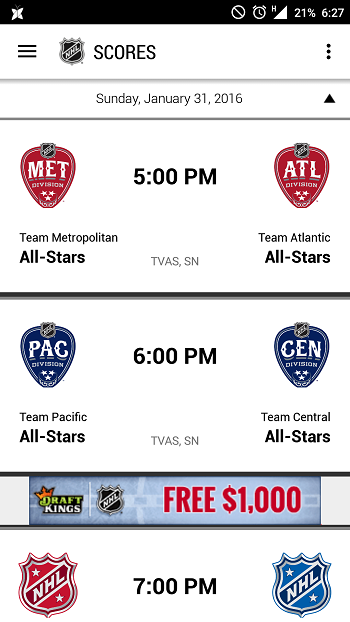 The All-Star game will finally make it to Gamcentre Live, though in a weird format of three separate broadcasts.

Alex Ovechkin Will Miss All-Star Game, February 2 Panthers Game Due To Injury
Ovechkin’s playing status is day-to-day, but by NHL rule, he will be required to sit out the Capitals Feb. 2 game against Florida.

Jonathan Toews to miss 2016 NHL All-Star Game due to illness - Second City Hockey
The captain will spend this week resting.

Joe Sakic, Brett Hull, Brian Leetch highlight all-time 3-on-3 all-star team of 1990s - NHL.com
NHL.com imagines what an all-decade team would look like if there was a 3-on-3 All-Star format back in the 1990s.

LA Kings coach Darryl Sutter remembers an All-Star format that meant something.
Those with grayer sideburns talk about the years between 1947 through 1950, and again from 1953 through 1968. The defending Stanley Cup champions would play the best of the rest of the league. "That was the best format ever, by far," Darryl Sutter said Wednesday

Fresh off a very successful All-Star weekend for the CWHL, the NWHL demonstrated that women's pro hockey is growing up to top professional standards. The New York Riveters and the Connecticut Whale executed the league's first ever trade.

The NWHL Trade: Wins and Losses - Along The Boards
In the first ever NWHL trade, Chelsea Laden and Shenae Lundberg were traded from the Connecticut Whale and New York Riveters, respectively.

An introduction to the Swedish Hockey League - Eyes On The Prize
North American fans may not be so familiar with the SHL, but it is a veritable factory for NHL greats, and worth knowing more about.

Is the Joe Pavelski poster really that bad? - Fear The Fin
The Sharks released a poster for their game against the Avs displaying Joe Pavelski. People have made fun of it but what if it is actually good? [Species: It's not.]

Adams retires from NHL after 14 seasons - Article - TSN
He scored 55 goals and had 105 assists over 951 career games with the Carolina Hurricanes, Chicago Blackhawks and Pittsburgh Penguins.

Poll: Majority of coaches remain in favour of challenge concept - Article - TSN
Only 6 of 27 NHL head coaches polled by TSN don't like the coach's challenge at all and would just as soon see it abolished.

NHLer Clayton Stoner fined $10K for hunting grizzly bear without a proper licence - CBC News
Clayton Stoner, an NHL defenceman from northern Vancouver Island, has pleaded guilty to one of five charges stemming from a grizzly bear hunt in 2013.

Gustavsson will likely be coming back, has been discharged from Mass General - Stanley Cup of Chowder
A sigh of relief for Jonas Gustavsson.

Oilers Claim Adam Clendening Off Waivers From Anaheim - The Copper & Blue
The Oilers have added a right shooting defenceman.

Fun Stats I learned on Gretzky's Birthday - The Copper & Blue
A close look at Gretzky's production in his prime, with the Oilers, shows mind-boggling production.

Canada’s Spink twins ruling NCAA ice for the Colgate University Raiders - The Globe and Mail
Canadian twins are inseparable, but only one is nominated for the NCAA’s Hobey Baker Award, awarded to the top men’s player

North Korea on ice: Canadian plans hockey tournament in Pyongyang - The Globe and Mail
Announcement of the event comes days after North Korea said it had detained U.S. university student Otto Warmbier, 21, for what state media described as a "hostile act".

Alex Radulov agrees on new KHL deal, ending NHL drama: Report - Puck Daddy
Reports out of Russia are that the two-year deal is worth over $10.7 million (U.S.), or 840 million rubles